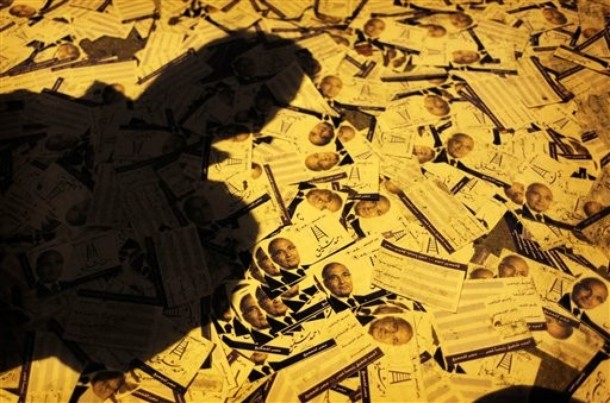 The results of the first round of the presidential election in Egypt last week reflect a number of different variables that have influenced voters over the past fifteen months since the revolution. The outcome of the first stage of this historic election – advancing the Brotherhood’s candidate Mohamed Morsi and Mubarak’s former Prime Minister Ahmed Shafik to the second round on Jun 16-17 – has endangered the goals of the January 25 uprising and puts Egypt at risk for a resurrection of the former regime. While the polling process appeared to be fair, it was by no means free, because voter decisions were being driven by the same old political machines and media propaganda that were in operation under Mubarak’s rule.

The three trends revealed most clearly by the results are: 1) a significant decline in the Brotherhood’s popularity in the street; 2) the revival of the former ruling party’s voter mobilization apparatus; 3) and the fragmentation of revolutionary forces to such an extent that they are now in need of an internal revolution against themselves.

The results, which set up a runoff race against Mohamed Morsi and Ahmed Shafik, present voters with a frightening choice between “the restoration of the Mubarak regime” or “rule of the Brotherhood and a religious state.” This is the choice faced by a large segment of the Egyptian electorate, particularly those belonging to the revolutionary camp and those who support a civil state.

In my observations of the polling process at more than 27 polling stations in Cairo and Giza, I was struck by the noticeable deterioration of the Brotherhood’s image in the eyes of voters, attributed to the Freedom and Justice Party’s disappointing performance in Parliament and apparent ambition to monopolize all political institutions – the Parliament, the Cabinet, and the Constituent Assembly.  Voters also expressed disillusionment with the Brotherhood’s broken promises: violating prior commitments to refrain from running a presidential candidate and competing for all of the parliamentary seats. Although the Brotherhood’s Freedom and Justice Party won nearly 10 million votes in the parliamentary elections six months ago, Mohamed Morsi barely obtained 5 million votes in the first round of the presidential election, meaning that the Brotherhood has lost around half of its support base, despite the organization’s formidable ability to mobilize voters.

The most surprising fact confirmed by the election results is that the Brotherhood is no longer the single most organized political force in the country. Elements of the former ruling National Democratic Party, which was formally dissolved by court order in March 2011, have reemerged as a major political force by mobilizing regime loyalists and those frustrated with the performance of the Islamist-dominated parliament to vote for Ahmed Shafik. This resurgence of the “filul” or former regime remnants gave Shafik the unexpected edge and late surge of support that pushed him into the runoff round. Shafik benefited significantly from the thousands of former NDP members and officials in Cairo and the Upper Delta who campaigned on his behalf.

According to the final results announced on the morning of May 28, leftist candidate Hamdeen Sabbahi came in third place with around 20 percent of the vote. Sabbahi’s strong showing of nearly 4 million votes is worth a tip-of-the-hat, given his status as an underdog candidate without the institutional backing of the Brotherhood’s 83-year-old organization or the former NDP’s thirty-year-old network as a ruling party.

Sabbahi was able to win these votes on the basis of his personal track record of integrity and longstanding popularity with Egyptian voters, despite having the least financial resources among the five front-runners, especially in comparison to Abdel Moneim Aboul Fotouh and Amr Moussa, who spent vast sums of money on their ultimately unsuccessful campaigns. At the outset of the campaign season, Moussa was in a strong position to capitalize on his popularity as the most famous diplomat in Egypt to win the presidency, however he failed to convince supporters of Mubarak’s regime to vote for him due to Shafik’s competing candidacy and the splitting of pro-civil state voters between him and Sabbahi.

The results indicate that Sabbahi was the most successful in taking advantage the fragmentation of the electorate, by winning the backing of a large number of Muslim supporters of a civil state, as well as Coptic Christians (who also voted in significant numbers for Shafik and Moussa). Sabbahi also benefited from luring some revolutionary voters away from Aboul Fotouh’s camp and from his natural base of support among Egyptian leftists. The combined weight of these separate constituencies propelled Sabbahi to third place, but ultimately the splitting of the revolutionary camp between Sabbahi and Aboul Fotouh ensured the victory of Shafik and Morsi in the first round.

The results prove that the revolutionary camp is now paying the price for its internal disagreements and lack of consensus, which led to the entry of three different revolutionary-oriented candidates into the presidential race. Sabbahi and Aboul Fotouh (who finished in fourth place) won around 9 million votes combined. If these votes had been directed toward a single revolutionary candidate, the results of the first round would have been very different. This is the second time in six months that revolutionary forces have failed to obtain the support of the Egyptian streets, after their poor performance in the parliamentary elections in which the “Revolution Continues” list won only seven seats (in addition to another five won separately by other liberal and revolutionary groups). The failure to unify Sabbahi and Aboul Fotouh in a single presidential team ensured that neither candidate would succeed.

Fourteen months after the uprising, revolutionary forces have yet to establish a functional political party after Islamist parties swept the parliamentary elections. Unable to convert their grassroots support into political power, revolutionaries remain in the streets instead of in Parliament, lacking any real vision or direction beyond Facebook and Twitter.

Egyptian voters cannot be blamed for splitting their support between rival revolutionary candidates, but rather the elite bear responsibility for their lack of cohesion and organization from the start.

What was very clear to me during my conversations with voters at several polling stations was that revolutionary candidates had failed to reach most of them, and the two political forces that had succeed in co-opting them and playing on their emotions were the Islamists followed by elements of the former ruling party. This is the unfortunate truth that revolutionary youth must recognize if they are serious about competing in the political arena in the future. Egyptian revolutionaries are in need of their own internal revolution to activate and harness the power of the street through means other than protesting.

Those who argue that election results prove the political demise of revolutionaries are wrong, because more than 65 percent of voters cast ballots for candidates associated with the revolution (including Muslim brotherhood candidate Mohamed Morsi.)

Residents of the coastal cities such as Alexandria, Port Said, and Suez – known as strongholds of revolutionary activism – voted in large numbers for revolutionary candidates. Sabbahi and Aboul Fotouh won significant support from Suez, the site of the first martyr of the revolution, and Alexandria, home to the late Khaled Said, whose brutal killing at the hands of police officers ignited calls for the original “Day of Rage” in January 2011.

The results also revealed that the historical strongholds of the NDP in Upper Egypt remain intact, and that voters in these areas are still mobilized by traditional patronage networks and political tribalism.

The election was fair, in that there were no reports of egregious and systematic irregularities or fraud, such as barring of voters from reaching polling stations or the use of violence against them. However, it seemed to me that the electoral process was not truly free, due to the lack of political awareness among large segments of the electorate. Thousands of voters went to the polls undecided, only to be exploited by supporters of the Muslim Brotherhood and elements of the former NDP, which were willing to mislead and guide bewildered voters to Morsi or Shafik. It was also apparent that the satellite TV channels biased toward the former regime had a significant impact on voter attitudes.

Many voters were weighing the tradeoffs between the polar opposites — Morsi and Shafik — outside of polling places. Others made their decisions based solely on a candidate’s appearance or the elegance of his speech.

The results suggest that voters did not choose their candidates on the basis of their campaign platforms, which played only a minor role in their decision-making. Although the platforms of Aboul Fotouh and Moussa appeared to be the strongest in terms of their detail and feasibility, the candidates trailed behind their rivals, coming in fourth and fifth place respectively.

Government-conducted polls, generally viewed as unreliable, were thoroughly discredited by the first round results. For weeks, the polls showed Mouss and Aboul Fotouh leading the pack of candidates, a prediction that turn out to be wildly off-base. The neutrality and accuracy of these opinion polls has now been fundamentally called into question, and it is worth considering whether these polls – widely publicized before the elections – may have influenced voters’ attitudes and preferences.

The fact that Aboul Fotouh came in fourth place with barely 18 percent of the vote was a huge surprise and shock to his supporters. Aboul Fotouh’s weak performance confirmed fears that the ideological diversity and breadth of his supporters would ultimately cost him the election. The results reveal that Aboul Fotouh failed to win adequate support from liberals and Christians, and even from the Salafis (except for Alexandria, where the Salafi Dawa movement had officially endorsed Aboul Fotouh). Aboul Fotouh also failed to sway marginal supporters of the Brotherhood who were on the fence and might have been persuaded to support the independent Islamist over Morsi.  Many voters I interviewed said they did not vote for Aboul Fotouh because of his vague vision and seeming lack of direction.

The Christian vote played a significant role in the fate of the three civil-minded candidates, Shafik, Sabbahi and Moussa. These three candidates won the bulk of Christian votes in Christian-majority neighborhoods in Upper Egypt and Cairo.

During my observations at 27 different polling stations, what struck me most was the discrepancy in the numbers of male and female voters: The lines for female voters were considerably longer than their male counterparts, suggesting that a significant number of women are acting on their desire for political participation after decades of marginalization, despite ongoing harassment and discrimination in the streets and Parliament’s efforts to sideline the role of women in society.

It appears that millions of Egyptian voters were influenced more by their fears than by their hopes and dreams. Those opposed to a religious state turned to Sabbahi, Moussa and Shafik, and those anxious about continued insecurity and instability turned to Shafik and Moussa. Voters fearing political polarization along religious and ideological lines turned to Aboul Fotouh as a symbol of national unity. The only exception to this rule is that many Islamists voted for Morsi out of a desire to fulfill the dream of implementing Sharia law.

The impending run-off between Morsi and Shafik will lead to deep polarization along political and religious lines, between supporters of a religious vs. a civil state, and between Islamists who have pledged their support to Morsi and Christians who are inclined to Shafik. But the greatest danger is that the election will become a referendum on the January 25 revolution, between the candidate of the Brotherhood – who hesitated to participate in the protests and then exploited them for political gain – and Shafik, who tried to eradicate the demonstrations completely. Fifteen months after the revolution, the Egyptian people now face a choice between a modified version of the Mubarak regime and the rule of Islamists, between the military and a religious state, neither of which expresses the aspirations voiced by protesters in Tahrir Square last January.