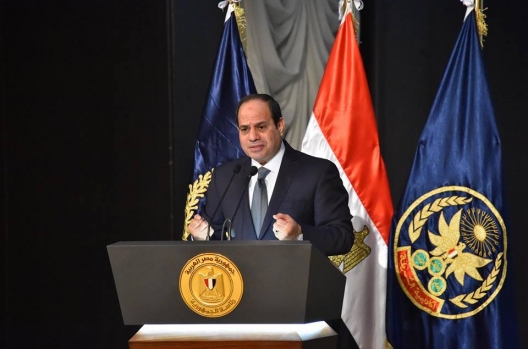 It has been almost five years since the head of the Mubarak regime, Hosni Mubarak himself, was removed from office—a moment many heralded as the end of the Egyptian state regime. Today, a new political reality exists. Is it appropriate  to speak of a new, singular, cohesive, Egyptian regime? Or is the picture actually far more disparate, with power far more dispersed?

The Egyptian state itself is often described as simply a ‘political dispensation’ – particularly by those who are unsure whether one can describe Cairo as being controlled by a ‘regime’ similar to that of Mubarak’s. A ‘regime’ is usually far more cohesive and consistent than what we see in Cairo today. That’s not to say that autocracy doesn’t exist in Egypt’s political reality today – on the contrary, its clear that autocracy has underpinned Cairo’s ruling elite in Mubarak’s time and now. Indeed, autocracies are inherently given to sometimes-erratic expressions of power, which also goes some way to explaining Cairo’s behavior.

On the other hand, Mubarak’s regime already relied on what might be termed as ‘coalitions of corruption,’ where corrupt alliances that didn’t rely on the rule of law, held the balance.  But it was a regime, and functioned as such. The now infamous Al Jazeera trial, for example, would have been very unlikely to have taken place under Mubarak’s rule – if the executive wanted an issue like to go away, it would have simply gone away. Under the post-Morsi dispensation, first under Adly Mansour underpinned by the Egyptian military, and then Abdel Fattah al-Sisi’s presidency, something like the Al Jazeera trial could very easily have happened – and did. A trial that was easily foreseeable to attract immense negative international attention (not to mention huge repercussions for freedom of expression) took place, and was persistently pursued. Mubarak’s regime wouldn’t have been quite so gung-ho. In this case, the post-Morsi executive of Adly Mansour and Abdel Fattah al-Sisi clearly wanted one thing in that trial (indeed, some indicate privately that Adly Mansour ordered the prosecutor general not to go ahead with the trial in the first place) – but the Interior Ministry and the judiciary were not on the same page. In 2014 and 2015, it was clear that the executive wanted the case to go away – and it didn’t. That’s not the sign of a Mubarak-like regime.

Another example that also brings into question how cohesive this political dispensation is – the arrest of Salah Diab, a famous Egyptian business and founder of al-Masry al-Youm, one of Egypt’s more widely distributed newspapers. Diab is not remotely associated with the Islamist camp, nor with revolutionary activity – he is a traditional stalwart of the establishment. It is true that there were critical pieces within his paper that were unfavourable towards certain government policies – but an arrest of Diab by the security services in this fashion was rather unexpected. He was photographed in handcuffs, with those pictures then leaked to news websites, which simply added to what must have been intended humiliation. Diab’s position within the broader establishment notwithstanding, he also has important international links – within his immediate family, Diab’s relatives are married to two of the most senior families of the UAE, the Ottaiba family and the Jaber family. Yusuf al-Ottaiba, the UAE ambassador to Washington DC, has lobbied heavily for the Sisi administration in the US; Sultan al-Jaber is one of the most senior UAE officials in Abu Dhabi when it comes to the Egyptian file. None of these relationships, which are obviously quite pertinent to Cairo’s geopolitical strategies, obviated the arrest of Diab – though he was eventually released. The fragmentation of the state internal power structures is quite telling.

But this current administration is a non-regime, with autocracy underpinning it on the one hand, and a multi-establishment on the other. Each part of the Egyptian state has its own establishment – the military, the security apparatus, the media, the religious establishment, the judiciary, the business elite, and the presidency. They act relatively autonomously of each other, with the presidency having a ‘godfather’ veto power, particularly given his entrance from the military establishment and popular support – but he’s not always willing to exert that veto, and has made that clear. We have seen that in the aforementioned Al Jazeera case, and more recently in the arrest of Diab, as well as the failed Civil Service law. In all three cases, it was clear that the executive wanted one thing – but that other powers within the broad make-up of the Egyptian state wanted something else. Sisi didn’t override them – Mubarak would have.

With that being the case, the potential for building a ‘regime’ has slipped into, by default, a non-regime, or a set of interconnected self-governing islands. If accountability were at the root of that ‘sovereignty,’ that could make for a rather good form of decentralized government. But it is not accountability that underlines it – it’s simply the ability and capacity to exert power. Ashraf El-Sherif describes the current president, Abdel Fattah al-Sisi, in a particular fashion as a result. This political scientist at the American University in Cairo puts it as such: “I don’t see him [Sisi] as a dictator.” Rather: “He’s the representative of an alliance of dictatorial state institutions.”

But then, the extremely opaque nature of this dispensation makes discussions around it rather difficult to nail down. Egypt isn’t quite Saudi Arabia, where political analysis and family gossip often tend to be the same, as my colleague, Nathan Brown, points out. But the opacity almost makes it, in practical terms, difficult to distinguish. We are guessing, and speculating, about the motivations about the different actors, and thus where they are trying to go because, quite simply, it’s difficult to identify who is making the decisions that really count, and how they come to those decisions.

None of that is particularly good news. Egypt stands in the midst of a myriad of challenges – some that are purely of its own making internally, and some that result from being located in a region where supra-national issues would plague Egypt regardless of what choices its rulers make. Be that as it may, Cairo needs, and will continue to need, to address such problems. The demographic question, where the vast majority of the population is under the age of 35, and the average age is about 24 (and dropping); the sluggishness of the economy, worsened, no doubt, by the embattled tourism industry; those two factors alone, considering the impending need for huge numbers of jobs, ought to be enough to make any government unnerved. But Cairo does not have to settle only those problems – there are scores of security ones as well, more properly organized into four. The Sinai insurgency; militancy in the Western desert; ISIS linked groups and cells; and those disaffected supporters of Mohammed Morsi who have turned radical. But precious little reform is being envisaged in the short or medium term – and even if anyone did have the intention to begin, the state is also uneven and disjointed, as mentioned above.

Cairo desperately needs thorough plans to address all of those security threats, and medium to long term strategy to address the core structural challenges of the population’s demographic and jobs. None of that can be done comprehensively without addressing the key areas that need reform – the judiciary, the security sector, the economy, and political arena. At a time like this, the institutions of the state ought to move in the same direction, and not simply agree on a nationalism that is often base jingoism. But it seems that lesson will take a while longer to learn.