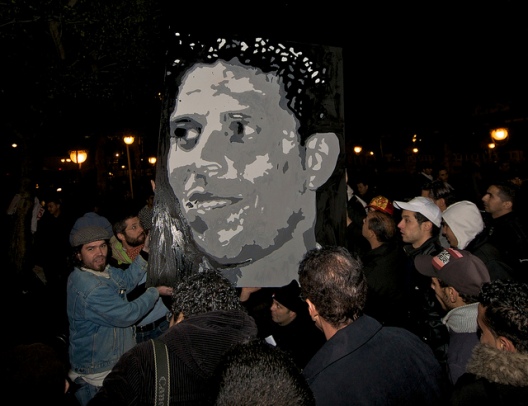 Three years ago, a humble vendor Mohammed Bouazizi set himself on fire outside a local government building in the interior town of Sidi Bouzid, and Tunisia will commemorate the event with demonstrations in downtown Tunis and Sidi Bouzid. Bouazizi’s story has become the stuff of revolutionary lore. Young and unemployed, he bought a scale, cart, and fruit on credit to make whatever money he could. Police, the local representatives of an oppressive dictator, then robbed Bouazizi of his dignity and livelihood by taking his cart and slapping the young man (although some Tunisians will tell you Bouazizi also had some choice words for the female officer).

As the narrative goes, when he self-immolated in front of the provincial administration, he sparked not only Tunisia’s revolution but uprisings across the Arab world, where a young demographic suffered from oppression and a stagnant economy. This story is true, but overlooks an important factor that separates the motivations behind the first protests in Tunisia from those in Egypt and other Arab transitioning counties. Regional inequality was and continues to be a driving factor behind Tunisia’s economic and political crisis. So long as Tunisia’s inlands remain ignored relative to its more-developed coast, discontent and unrest will plague its political and economic recovery.

Three years out, most Tunisians will tell you either that nothing has changed since the revolution or that their lives have gotten worse. The numbers back them up. National unemployment reached over 18 percent after the revolution and now hovers around 17 percent. Inflation sits at around 6 percent, peaking at 6.5 percent in March, the highest in years. Throughout the country, Tunisians complain that even basic goods are now unaffordable and jobs impossible to find.

As hard as things are nationwide, the situation is worse in Tunisia’s interior. Since French colonial times, Tunisia’s coast has been better developed. The pre-independence government built ports, a railway, and roads in what is called the Sahel region. Tunisia’s first post-independence leader, Habib Bourguiba, himself from the Sahel town of Monastir, continued the pattern. Under ousted authoritarian Zine El-Abidine Ben Ali, the government encouraged investment in coastal tourism and manufacturing industry disproportionately in relation to inland regions.

For those who remain undistracted by the capital’s political hijinks, the disparity is obvious. Highways along the coast are wide, well built, and accommodate the buses of tourists heading to the area’s major hotels. Further west, however, travelers are greeted with one small town after another along narrow, bumpy roads. Unemployment off the coast is double the national rate at nearly 35 percent, according to official statistics. With less cash flow, inflation hits residents here harder, making ends further from meeting. Poverty, which has been successfully reduced in Tunisia as a whole, still remains high in the interior.

Infrastructure of all kinds is worse in Tunisia’s interior. Hospitals and access to specialized medical care of any kind are rare and journeys to them made more problematic by bad roads. Education disparities are striking. A 2011 African Development Bank report puts illiteracy rates in the south and midwest at over double of those found in the capital and coastal areas. Higher education options are also limited with students frequently having to travel to coastal areas for university. The inland region is also less connected, with mobile service and stable internet less available.

Public outrage off the coast has not been limited to Bouazizi’s dramatic suicide and resulting protests. In 2008, riots and labor strikes rocked the central town of Gafsa, 100 kilometers from Sidi Bouzid. Authorities under Ben Ali harshly suppressed residents of the mining town frustrated over what they saw, and continue to see, as coastal exploitation of their resources. In November 2012, people in Siliana protested the “marginalization” of the area, leading to a violent crack-down in post-revolutionary Tunisia.

In the wake of Tunisia’s revolution, leaders at first seemed to understand that regional disparities needed to be addressed adequately. At the first anniversary of December 17 in Sidi Bouzid, leaders promised development projects and more jobs. By the second anniversary, however, Tunisia’s president Moncef Marzouki and assembly speaker Mustapha Ben Jaafar were heckled off stage by residents who also threw rocks at the politicians. Local community members say that no improvement has come to the inlands, and the costs for Tunisia are growing.

Internal migration and emigration continues to be a problem in Tunisia. Approximately 65 percent of Tunisians have settled in the more urbanized Sahel region. As people move toward coastal cities, they pressure the existing infrastructure there and create tensions with residents and police as many settle into informal work. Of the people leaving Tunisia altogether, a disproportionate number of them are from the interior. Many in Sidi Bouzid and Kairouan will tell you they have at least a few friends or relatives who have tried to go to Libya or Europe, with the best educated having the best chance.

Militant activity is also growing in post-revolutionary Tunisia, focused on southern and interior regions. Local civil society members say young people are forced into smuggling, fighting with Islamist militants or even leaving to fight in Syria’s civil war. Fighting on Chaambi mountain, on the border with Algeria, has heated up in the past year and attacks on Tunisian security forces have increased in the past months. The government blames the killings of opposition politicians Chokri Belaid in February and Mohamed Brahmi in July on Islamist militants they say also operate in the west.

To improve the chronic imbalance, Tunisia needs to invest in its interior. Tourism opportunities exist in the west and south, ranging from desert voyages to Islamic cultural sites. Getting tourists to them, however, remains a problem, demanding a dramatic improvement in basic infrastructure (roads, rail, and air transit options) where feasible. Encouraging private investment will not be easy, but more likely when mines and farmlands are better accessible.

To achieve this level of development, Tunisia also needs to improve its local government institutions. Since 2012, Sidi Bouzid has had three governors, all removed due to local anger at the government’s ineffectiveness. Playing musical chairs with government officials will not improve public services. If local governments can define reasonable short term targets for development—and remain transparent and dedicated to the projects’ completion—trust in the government could be rebuilt. Any measures taken should set achievable goals for bringing jobs to the unemployed, as for many that is the only important factor.

Tunisians sacrificed their lives to inspire a region to call for equality, dignity, and economic opportunity. Now they deserve a government that will restore the hope so many have lost.

Robert Joyce is a story editor for Tunisia Live, a Tunis-based news outlet. He writes about the Arab world and previously worked for World Policy Journal and Human Rights First. Follow him on Twitter @rjoyce908.