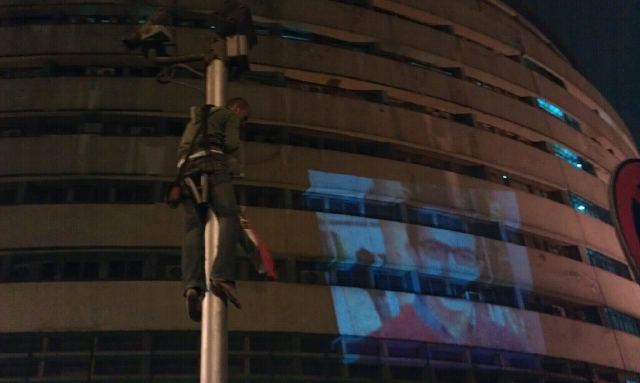 After a year of unrealized hopes to change the regime, to end military trials, to lift the state of emergency, and to transition to a civilian government in the post-Mubarak period, the revolutionary youth groups, leftists, and secular liberals have tried to reignite the spirit of the January 25th uprising with a series of protests at many of the symbolic sites around Cairo on the day of and since the anniversary.

With rallying calls such as, “This is a demonstration, not a celebration,” the revolutionaries have clashed with supporters of the Muslim Brotherhood, whom activists largely regard as co-conspirators with the Supreme Council of the Armed Forces (SCAF) to derail progress and realize true reform.

Many analysts and journalists have written about the lack of consensus on how the January anniversary should be commemorated. While activists gathered in Tahrir on the 25th in numbers unseen (and possibly exceeding) since the first January uprising, calling for the military to return to their barracks and leave the affairs of the country to a civilian leadership, the Muslim Brotherhood erected a stage in celebration of the occasion, paying tribute to the martyrs of the revolution and the Brotherhood’s victory in the elections. At one point in the day, a couple even got married on the Brotherhood stage. The attitude adopted by the group fell in line with how the SCAF meant to frame the occasion – as one of merriment and unity over a “revolution well done” – but families of the dead and wounded, along with many of the activists whose friends and colleagues suffered imprisonment, abuse, and military hearings found the display inappropriate.

Minor clashes erupted between the revolutionaries and the supporters even before the protests/celebrations had begun. Brotherhood supporters shouted at activists for disrupting the country’s natural transition and not allowing politicians to do their jobs, while revolutionaries accused them of selling out to the SCAF to ensure a political power grab. Yesterday bore witness to another clash between the Brotherhood and protesters that resulted in rocks hurled at each side before the Brotherhood decided to disassemble their stage and vacate Tahrir square. Meanwhile, revolutionaries carried on with their protests, vowing to maintain the open ended sit-in until the SCAF vacates its throne. Many continued voicing their demands at the Maspero building, site of state television headquarters and the deadly confrontation between Coptic protesters and the army Egyptian army last year. The “Kazeboon” campaign projected videos onto the building showing the gross use of excessive force against protesters in direct contradiction to the state’s message to the general public.

The protesters, leftist, and secular groups never shared affection with the Muslim Brotherhood after the 18 days that toppled Mubarak. Even then, the Brotherhood’s meeting with intelligence chief Omar Sulaiman just before the massive January 28 demonstrations incensed the activists. Discontent with the Islamist group is less over ideology than the perceived inclination to side with the military for the sake of stability. Dissatisfaction increased after the November and December clashes that resulted in scores more falling victim to police and military brutality while the Brotherhood distanced themselves from the protests and chose to focus on election gains. The revolutionaries feel justified in their denouncement of the Brotherhood on the basis of:

The anniversary of the revolution has certainly galvanized activists demanding social change, but the SCAF’s manipulation of state media to turn public opinion against the protesters coupled with the split between the activists and the Muslim Brotherhood over the appropriate path for the country’s transition has the revolutionaries fighting an uphill battle. With the liberal and leftist parties receiving only a small share of the voices in parliament, ordinary Egyptians’ increasing focus on economic concerns, and a leadership resistant to dramatic changes that has allowed it to act with impunity for decades, Egypt’s streets seem to be one of the few places left where protesters’ grievances will be heard.

The Brotherhood’s Freedom and Justice Party (FJP) may currently hold just short of a parliamentary majority, but its next steps must carefully take into consideration the growing unease. Based on recent data published by Gallup, the public at large voted for the FJP mostly for pragmatic rather than ideological reasons. The “revolution fatigue” coupled with a desire for a better standard of living boosted their numbers, but the popular tide can quickly turn against them if these demands are not addressed and soon.