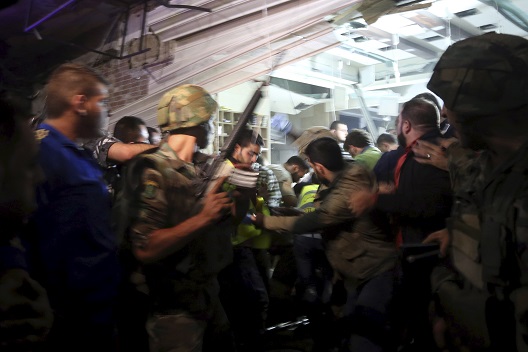 The Dahieh bomb blast on November 12 was the first to target Beirut’s southern suburbs since June 2014, when a suicide car bomb killed a General Security officer. In the period between July 2013 and February 2014, jihadist extremists targeted Hezbollah-dominated areas in nine separate attacks.

The dual suicide bombings targeting the Shia Beirut suburb of Dahieh, resulting in the death of 43 people and 240 injured, strongly suggest that terrorist organizations have reactivated their cells in Lebanon after a relative lull. It also indicates that the Islamic State (ISIS or ISIL) has begun to dominate the Lebanese jihadist scene. The evolution of the jihadist scene in Lebanon helps to explain the rise of ISIS in Lebanon—and why we can expect more terrorist incidents like the Dahieh bombing in the months to come.

Based on the annual increase in arrests, terrorist organizations have clearly proliferated in Lebanon attacks since the beginning of the Syria war and the subsequent involvement of Hezbollah in conflict, building on the rift between Sunnis and Shia. Hezbollah currently fights alongside the regime of President Bashar al-Assad, a member of the Alawite community, against a largely Sunni rebellion. Hezbollah has sent thousands of fighters into Syria. Sources close to the party say between 7,000 to 10,000 members of its militants operate there. On the other hand, Lebanese Sunnis and Palestinian refugees in Lebanon support the Syrian rebels; between 800 and 1,000 Sunnis from Lebanon have gone to fight in Syria, according to Tripoli and Bekaa Salafi sheikhs speaking on the condition of anonymity.

One can trace the evolution jihadist activity in Lebanon, passing through five phases since the start of the Syria war. In 2012, Lebanese Sunnis focused on fighting Hezbollah in Syria, using Lebanon as a recruiting and resupply base. “This was facilitated by networks put in place by Zahran Allouch [the current leader of Jaysh al-Islam] and by familial and social relations linking local Tripoli residents with Syrian rebels,” Salafi Sheikh Nabil Rahim said in an interview with the Atlantic Council. Such is the case of Khaled Mahmoud, the Emir of the Jund al-Sham—a jihadist faction based near Syria’s Homs. He hails from the Mankoubin area in Tripoli who recruited several dozens of youth to fight in Syria.

The second phase centered on taking the fight to Hezbollah on its Lebanese home turf. In 2013, jihadists attacked members and offices of the organization with explosives and bombed Hezbollah-controlled areas along the Syrian border. The al-Qaeda-affiliated Nusra Front or its Palestinian sister organization, the Abdallah Azzam Brigades, claimed most of the bombings in Beirut and Tripoli. At the end of June 2013, improvised explosives targeted Hezbollah convoys in the Bekaa Valley. In early July of that year, a booby-trapped car exploded in Bir al-Abed, wounding 53 people. In November of 2013, the Abdullah Azzam Brigades claimed responsibility for a dual suicide attack—the first in Lebanon—targeting the Iranian embassy. Several other bombings followed in the Bekaa Hermel region throughout 2014. That year also witnessed the rise of ISIS in Lebanon, which claimed responsibility for a suicide bombing early in January, among other incidents including the Duroy Hotel bombing in June 2014. The terrorist organization also joined forces with the Nusra Front in clashes against Hezbollah on the Syria-Lebanon border.

The third phase saw growing enmity between Salafis in Lebanon and the Lebanese Armed Forces (LAF). The latter had waged several campaigns against jihadists—from the crackdown on the Takfir Wal Hijra group in 2000 to the 2007 clashes with Fateh Islam in the Palestinian camp of Nahr al-Bared. These campaigns partly explain the growing convergence of interest between the LAF and Hezbollah in fighting a common enemy. In 2014, jihadists retaliated by conducting several attacks on the LAF using roadside bombs and gunmen. The last attack against Lebanese soldiers took place in Ersal, a town lying on the Syria-Lebanon border. Clashes had also taken place between Islamist supporters of Sheikh Ahmad Assir—now in captivity—in the city of Saida in the summer of 2013. Similar clashes erupted between the LAF and Islamist supporters of the Nusra Front and ISIS in over 20 rounds of fighting in Tripoli, the latest in October 2014.

The fourth phase saw a regrouping of the Nusra Front and ISIS in Ersal, in the Qalamoun region bordering Lebanon. Now home to over 100,000 Syrian refugees, it served as a staging ground and supply route for rebels in western Syria until last year, when Hezbollah and the Syrian regime blockaded the town. According to an officer from the Lebanese army speaking on condition of anonymity, over a dozen attacks targeted Hezbollah and LAF positions in the Bekaa Valley between 2013 and 2015. During this time, cooperation between ISIS and the Nusra Front grew, culminating with the kidnapping of over 30 Lebanese soldiers in August 2014 after the LAF arrested Ahmad Jomaa, the leader of Fajr al-Islam (a group allied with ISIS).

The latest phase in recent months has witnessed ISIS supplanting other jihadist groups in Lebanon. “The two organizations [Nusra and ISIS] tend to see eye-to-eye when it comes to Lebanon,” according to Salafi Sheikh Adnan Oumama. Over the past year, however, one Tripoli resident described a marked decrease in Nusra terrorist activity and a sharp increase in attacks claimed by ISIS. The Nusra Front has clearly taken a backseat to ISIS, which has seen growing popularity within specific Sunni circles. It has widened its appeal within marginalized youth groups, whether in Tripoli, the Bekaa Valley, or within Palestinian camps in Lebanon. “ISIS is the stronger player, many want to join it,” said a young Tripoli resident to the Atlantic Council. Residents have also witnessed the same trend in Lebanon’s largest Palestinian camp, Ain al-Helweh. In late October 2015, Lebanese intelligences services captured a cell managed by two Palestinian with links to ISIS. They planned to target Shia areas, politicians, and the LAF. “The recent bombing shows ISIS’s determination to make Lebanon a new priority,” says sheikh Rahim.

According to Salafi sources, dozens of youth from Tripoli have utilized Lebanese networks to join terrorist organizations fighting in Syria and Iraq. The return of some of these fighters, combined with the presence of hardliners within the Syrian refugee population in Lebanon (9 out of 11 people arrested recently were Syrian), may explain the recent escalation of ISIS activity. Despite the increased efforts of Lebanese security agencies that have significantly hindered terrorist activity, Lebanon has likely not seen its last Dahieh bombing.