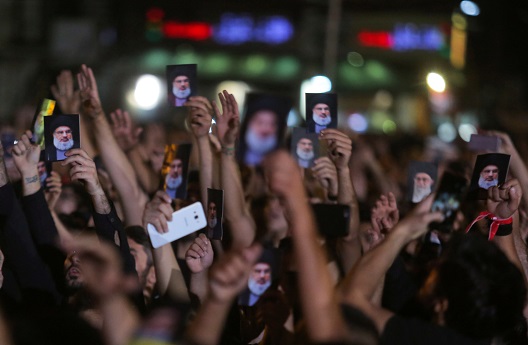 Hezbollah’s power and resilience at the Lebanese level is not only derived from its military might and Tehran’s constant backing, but more importantly, from the tireless support of its Lebanese Shia Muslim community base. The allegiance of Lebanese Shia to Hezbollah is widely known to be rooted in the party’s capability to win hearts and minds through its social program and the organization’s nearly forty year struggle against Israel and more recently its “war on terror.” Yet ultimately, what makes the bond between Hezbollah and its base so strong is the feeling among many Shia, within the more popular classes, that Hezbollah’s arsenal guarantees political ascendancy and social mobility within the Lebanese system.

Lebanon’s independence and the 1943 National Pact allowed it to divide power between Christians and Muslims, with the Maronites and the Sunnis benefiting mostly from the power sharing agreement. Shia Muslims remained at the margin of the state both economically and politically. Despite awarding the position of the speaker of parliament to the Shia community, its experience was one largely of alienation and impoverishment, explains Dr Yusri Hazran in the report “The Shia Community in Lebanon From Marginalization to Ascendency.” According to Hazran, the vast majority of the Shia community belong to disadvantaged social groups—the peasants and the working class—and lived in underdeveloped rural areas and poor suburbs. The marginalization of the Shia community was also replicated within the Lebanese government. According to Hazran, empirical studies on Lebanese bureaucracy preceding the civil war show that the Shia community was the most poorly represented in the administration. “Before Hezbollah’s emergence, we were looked down upon, we had menial jobs such as shoe shiners, housekeepers, or occupied the lowest positions in the Lebanese administration,” says Houssein, a member of the Shia community who spoke on condition of anonymity.

Shia Muslims were also unhappy with the Lebanese government lack of concern of the Israeli operations in South Lebanon (a home base for the Shia community), the Palestinian guerillas there, or the military occupation starting in the 1980s. The 1989 period witnessed important changes for the Lebanese Shia community: the Taef agreement increased the Shia parliamentary representation (from 19 seats to 27, out of a total of 128 seats), it also put them on equal footing with the Sunnis and more importantly allowed Hezbollah to preserve its military arsenal in the name of the resistance against Israel while other Lebanese militias were forced to disband.

The struggle against Israel is essential to Hezbollah’s narrative in Lebanon. The organization’s insurgency against Tel Aviv allowed it in 2000 to put an end to its nearly twenty year occupation of South Lebanon. Besides its military activity, Hezbollah worked on capturing the hearts and minds of its community base. With Iran’s assistance, Hezbollah built an extensive network of social services. According to a report by MEPC, Hezbollah developed a highly organized system of health and social service organizations comprised of the Social Unit, the Education Unit, and the Islamic Health Unit including organizations such as the Jihad Construction Foundation, the Martyrs’ Foundation, the Foundation for the Wounded and the Khomeini Support Committee. Hezbollah entered a phase of tribulation after the assassination of Prime Minister Rafic Hariri, which was attributed to Hezbollah members and resulted in the end of the Syrian occupation of Lebanon, Hezbollah’s local backer. Hezbollah’s involvement in Hariri’s assassination did not decrease its community’s support. In 2010, a Pew study showed that more than nine-in-ten (94 percent) Lebanese Shia supported the militant group.

Another inflection point for Hezbollah was in 2013 when it officially recognized its involvement alongside the regime of President Bashar Assad in cracking down on a mostly Sunni insurgency in Syria. Hezbollah framed it as a war on terrorism. “It was a war on takfiris [heretics], who threatened the resistance axis comprised of Hezbollah, Syria, and Iran. There is no opposition and no rebels, just terrorists,” asserted a Hezbollah fighter in a previous interview who spoke to the author on condition of anonymity.

Unstable relations between Hezbollah and the Lebanese state ended that in 2016 when Hezbollah’s Christian ally, General Michel Aoun, was elected as the country’s new president, ending a 29-month-long vacuum at the head of the state. Aoun’s election was followed a month later by the formation of a cabinet under the premiership of Hezbollah’s previous arch enemy, Saad Hariri. This phase was marked by two important campaigns that fell within the organization’s war on terror. In the summer of 2017, Hezbollah launched an offensive on the former al-Qaeda affiliate, Haya’at Tahrir al-Sham and the Islamic State on the Syria-Lebanon border. The campaign, which ended with the transfer of some eight thousand Syrian refugees and a few hundred fighters back to northern Syria, gave credibility to Hezbollah’s “resistance against takfiris” narrative, anchored its position further within its mainly Shia constituency, and extended its reach outside its traditional base to Christian and Sunni communities.

Hezbollah pursued its consolidation efforts within the Lebanese system despite a crisis triggered by the sudden resignation of Hariri in November 2017 after a strong condemnation of Iran and Hezbollah. Hariri’s resignation, was quickly overturned, with the Prime Minister coming back to Lebanon and resuming his functions, on condition Lebanon would stick with its policy of distancing itself from regional conflicts. Hezbollah expert, Kassem Kassir, remarked that relations with Hariri’s Future movement improved after the crisis and that Hezbollah was actually able to reinforce its position internally.

These events underline Hezbollah’s capability to overcome internal challenges by resorting to pragmatic moves, and an astute and very coherent propaganda that has allowed it to consolidate power over its sectarian base. “Hezbollah has given us pride. It has won in Syria and given us power over Lebanon, we now have money and enormous political clout,”  argues Ahmad. His opinion is echoed by Bilal, who like Ahmad, does not support the organization. “Without Hezbollah’s weapons, we could go back to our subservient positions,” he points out.

And they might be right: Hezbollah has extended progressively its hegemony over the Lebanese system. Since 2008, the organization and its ally Amal have secured a veto power to any government decision, which introduced a constitutional precedent by putting an end to the majority rule replaced by consensual rule, requiring unanimous support to cabinet decisions. Hezbollah has also made sure only security figures supporting the militant group are appointed to sensitive positions, according to interviews conducted with security sources.

The growing wealth of its Shia leaders and its political mobilization does not appear to change the perspective of the majority political class: that an equal share of Shia members within the Lebanese system hinges on Hezbollah‘s arsenal. In this context Hezbollah’s far-reaching demands will remain legitimate in its constituency eye.