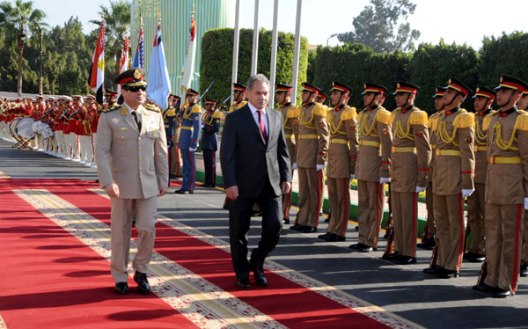 Many observers see the recent visit of Russian’s foreign and defense ministers to Cairo and news stories about the possibility of a large-scale Russian-Egyptian arms deal as a sign that the new Egyptian government is moving away from Washington and toward Moscow.  Yet even though this high-level Russian-Egyptian interchange has taken place at a time when relations between the Obama Administration and Egypt’s new top leader, Defense Minister, General Abdel Fattah al-Sisi, have deteriorated, it is neither a significant change in the relatively good relations between Russia and Egypt that have been steadily improving since Putin first rose to power nor a sign of an impending dramatic change in Egypt’s alliances.

Indeed, when Russian President Vladimir Putin went to Cairo to meet with then President Hosni Mubarak in April 2005, they also discussed the possibility of Egypt resuming arms purchases from Moscow (which had been Cairo’s main arms supplier before Egypt switched from allying with the Soviet Union to allying with the United States under the late President Anwar Sadat in the early 1970’s).  However, nothing much resulted from this Putin-Mubarak discussion as Egypt continued to rely primarily on the United States for arms.

When the Arab Spring arrived in Egypt in early 2011, Moscow adopted a cautious approach calling for any political change to occur in accordance with Egyptian law.  Although Mubarak was closely allied with the United States, Moscow did not want to see him fall from power.  Still, it moved to quickly establish good relations with the transitional Egyptian government.  While fearful of the Muslim Brotherhood, Moscow even managed to have good relations with its leader, Mohamed Morsi, after he became Egypt’s president in 2012.  While Putin and Morsi supported opposite sides in the Syrian civil war, Moscow valued Morsi’s opposition to foreign (i.e., non-Arab) intervention in the conflict.  Morsi even visited Moscow and met with Putin in April 2013 in the hope of obtaining Russian economic assistance and investment.

Yet while Moscow had good working relations with Morsi, it was relieved when he was overthrown by General al-Sisi—especially since Egypt’s new leadership has basically ended Cairo’s support for the anti-Assad opposition in Syria.  At present, Russian-Egyptian bilateral trade is at the level of about $3 billion per year.  Egypt is also a favorite tourist destination for Russians.  While their numbers fell in 2011, they revived quickly thereafter.  According to Russia’s foreign minister, Sergei Lavrov, about 100 plane-loads of Russian tourists are now arriving in Egypt every week.

The Obama Administration’s cutback in US military assistance to Egypt in response to the Egyptian government’s crackdown on the supporters of ousted President Morsi would certainly seem to offer Russia an opportunity both to sell arms to and gain influence in Cairo at Washington’s expense.  There are, however, two important factors likely to hinder this from proceeding very far.

Unlike the Soviet Union in the old days, Russia under Putin now insists that buyers of Russian weapons actually pay for them.  But the Egyptian government is strapped financially, and cannot spare much of its scarce resources to buy Russian weapons.  Saudi Arabia, Kuwait, and the United Arab Emirates (UAE)—all of which fear Morsi and the Muslim Brotherhood—have provided generous support (reportedly amounting to $12 billion) for the Egyptian government.  Russia’s relations with Saudi Arabia though, are extremely poor due to their sharp differences over Syria (where Riyadh has done far more to arm the opposition to Moscow’s ally, Assad, then has Washington) and over Russian claims that these two countries are supporting Muslim oppositionists in Russia’s restive North Caucasus.  Moscow has better ties with the UAE, which has bought substantial quantities of Russian weapons for its own armed forces, but spending its aid to Egypt on Russian arms does not appear to be a priority either for Cairo or Abu Dhabi.

Yet even if Egypt did buy substantial quantities of Russian arms (and especially if in the more likely event that it does not), Cairo is unlikely to switch from allying with Washington to allying with Moscow.  While Putin is far more sympathetic than Obama with regard to al-Sisi’s crackdown on the Muslim Brotherhood, Moscow is neither willing nor able to replace Washington as Egypt’s primary aid provider.  Instead, Moscow very much wants America to continue to play this role.  Indeed, it is far more likely that Egypt will remain a Russian trade partner as well as unsupportive of Muslim oppositionists inside Russia if America continues to be Egypt’s main military backer than if it does not.  For the Egyptian military is more likely to be able to maintain Egypt’s fragile stability with full American backing than with diminished and hesistant (much less no) American support.

Further, the Russians well understand that al-Sisi is talking to Moscow about buying arms mainly to arouse concern in Washington about “losing Egypt to Russia,” and so motivating the Obama Administration to restore the full level of American support for Cairo.  Nor would Moscow be unhappy with this outcome.

Mark N. Katz is a professor of government and politics at George Mason University, and the author of Leaving without Losing:  The War on Terror after Iraq and Afghanistan (Johns Hopkins University Press).