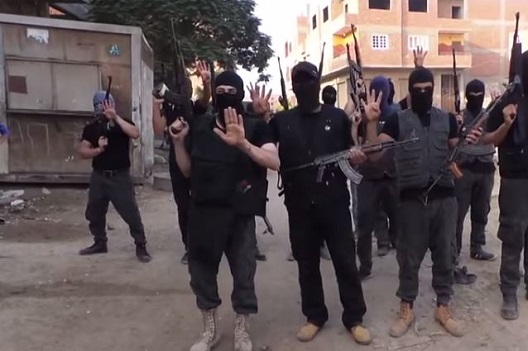 Ten seconds into a video showing over a dozen men armed with assault rifles threatening to target the police in south of Cairo, a man’s voice can be heard in the background instructing the men to ‘hold up [the] Rab’a [sign].’ Promptly, the men hold up four fingers as the main speaker continues to deliver threats to the police and army. A couple of them fidget, whispering to other masked men throughout the video. The men in the video were dubbed the Helwan Brigades.

Far more attention has been given in Egyptian media to the Helwan Brigades than is likely warranted. The video was originally published by privately owned newspaper Al Masry Al Youm, and other satellite channels and newspapers have since shared it, with the media displaying a vested interest in the case.

The video was shot in what looks like an ordinary urban neighborhood in the south of Cairo. In it, the men say they have paid a high price in blood—making direct reference to the violent dispersals by security forces of pro-Brotherhood sit-ins in the Raba’a al-Adaweya and Nahda Squares. They are quick, however, to claim they do not belong to the Muslim Brotherhood. They proceed to issue threats to the ministry of interior, saying their personnel will be targeted in that particular area. They also criticize the army for backing the ministry’s brutal practices of murder and rape.

Despite the onslaught of news items flooding Egyptian media regarding the arrest of Alyaa Aawad, a supposed Rassd journalist who is charged with filming the video, the most overlooked aspect of the Helwan Brigades is that there have been no reports of credible attacks carried out by these masked men.

Besides the instructions passed between the armed men in the video, such as raising the Raba’a sign and the constant whispers, the material produced is laden with singularities that give rise to many questions. How do those men, from a fairly impoverished area, have access to expensive weaponry and more importantly uniformly well off clothing? How do the majority have access to proper boots? Why are some of the men unusually fidgety?

Despite appearing to be filmed in a residential area, there are several factors in the video that make it look highly orchestrated. As the threats are delivered, residents casually walk behind the armed men as the video is being shot. Some stop to watch the spectacle. Why would residents risk appearing in the video even if they are friendly with the masked men? Why shoot a video with enough clues as to your whereabouts?

In any case, much of the media to has focused on the Helwan Brigades story, as more hype is being built up with news related to the alleged terrorist group, one that has not claimed a single terrorist attack since its emergence. The hype has also found its way onto social media with Helwan Brigades mentioned over 26,000 times in the past month in Arabic.

But with plenty of real terrorism to address, why would the state turn its attention to something as hollow as the Helwan Brigades? One needs only turn to Sinai where an increased militancy targets state and security. One may look to stories on Ansar Bayt al-Maqdis (ABM), who claimed responsibility for a large number of bombings and attacks on the state’s security apparatus, for a glimpse of radicalization and polarization. ABM also allegedly has direct ties to the militant group the Islamic State in Iraq and al-Sham, which controls significant parts of Iraq and Syria.

Perhaps the answer can be found in the state’s strategy so far. The state showed a vested interest in pushing the rhetoric of a ‘war on terror’ in order to secure a firm control on power and a mandate to act repressively. The state seems determined to achieve its initial objectives, so for example, in response to the Mansoura bombings which targeted the Daqahliya security directorate in December 2013, Egypt declared the Muslim Brotherhood a terrorist group, rather than ABM who actually claimed responsibility for the blasts. In fact, Egypt only declared ABM a terrorist group in April 2014, days after the United States’ own designation. The state now appears to be hammering home an association between the Helwan Brigades and the Brotherhood, by arresting a journalist from the pro-Brotherhood Rassd.

The state is going to great lengths to simplify the narrative in order to achieve the objectives set forth by its propaganda machine—continuing its crackdown on its enemies—irrespective of the reality on the ground. All the while, real threats persist. On June 30, a militant group named Ajnad Misr claimed responsibility for two bombs that went off outside the presidential palace killing two police officers, in a particularly embarrassing incident for the state. Security forces were warned of the presence of these bombs a week prior to the explosions, a warning that the ministry of interior ignored. Many Egyptians on social media mocked the Egyptian security forces and some expressed admiration of at least the competence of Ajnad Misr.

Real in-depth coverage of these attacks carries with it the risk that some will valorize these acts and perhaps even identify with them. Nuance is a nuisance the regime can do without, particularly since it raises more questions which may empower opposition to the regime’s brutal practices. Media stories are instead based on vilification and simplification, rather than delving into the complexities of the motivations that have led individuals to take these actions. The regime has opted for a simple security narrative.  The enemy must be simplistic with no sense of depth or appeal, something to vilify and destroy rather than confront.

Whether the Helwan Brigades are a real threat, or a gimmick used by the state for fear mongering or a diversion from a growing electricity crisis, state-sponsored brutality, real extremism and more, one thing is certain—the state appears content with a climate of polarization and extremes as long as ideas are oversimplified.

Wael Eskandar is an independent journalist and blogger based in Cairo. A frequent commentator on Egyptian politics, he has written for various publications, including Ahram Online, Daily News Egypt, Counterpunch, Al Monitor and Jadaliyya, and he blogs at Notes from the Underground.