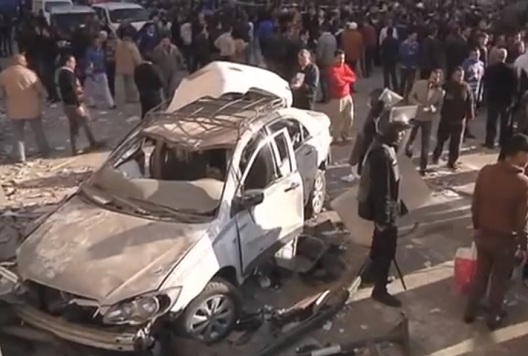 “Stay away from the installations and headquarters of the Ministries of Defense and Interior.” This was the warning issued to Egyptian Muslims by the Salafi jihadist group known as Ansar Bayt al-Maqdis (ABM) when it took credit for a September suicide car bombing that targeted Egypt’s Interior Minister Mohammed Ibrahim in Cairo.

In another statement claiming responsibility for a suicide bombing at the South Sinai Security Directorate in el-Tor in October, the group made sure to stress its commitment to avoiding civilian casualties, claiming that its fighters “did their best in terms of monitoring and planning so as to avoid injuring any innocent Muslim.”

Similarly, in its claim of responsibility for the January 24 car bombing outside the Cairo Security Directorate, ABM noted the challenge of its policy of “attacking without inflicting harm in the ranks of the Muslims.”

ABM, which has by now conducted dozens of attacks in North Sinai, as well as a handful in the Egyptian mainland, has largely kept its word. The group’s brutal campaign in Egypt has specifically targeted Egypt’s security forces, which last year toppled the Muslim Brotherhood government of Mohamed Morsi, and has since maintained tight control of the government. To be sure, innocent civilians have been killed and wounded in some of the group’s attacks. But the group has signaled that the security forces are its prey, with government installations and personnel taking the brunt of its violent campaign.

ABM’s target selection provides important insight into the current strategy of this clandestine jihadist group. The ongoing political battle between the military and the Brotherhood has yielded ABM an opportunity to portray itself as defenders of Egypt’s Muslims.

“We were horrified by what we saw of massacres against the helpless Muslim masses,” the group said in September, referring to clashes between the Brotherhood and the military last year at al-Nahda Square and the Raba’a al-Adaweya Mosque. The group further claimed that it had no choice in resorting to attacks, insisting that it was “forced to support our Muslim brothers in repulsing he who attacks their religion, souls, and honor.” Similarly, in its claim of responsibility for an October car bombing in Ismailia, ABM asserted that the violence was a response to the continued “repressive practices carried out by the Egyptian army against our people.”

At the same time, ABM appears to be reinforcing the jihadist notion that success comes through violence, not democratic processes. “Democracy is a form of atheism that violates the Tawhid of Allah,” ABM official Abu Osama al Masri recently proclaimed.

Cairo’s current approach may play right into the hands of ABM. Egypt’s Islamists already feel that the toppling of the democratically elected Morsi was a sign that democracy accounts for little in today’s Egypt. More importantly, the regime has responded to the rise of ABM by ramping up its crackdown on the Brotherhood. This includes round-ups of cadres as well as designating the group as a terrorist entity. In the long run, the government’s crackdown may push some Brotherhood members, in particular younger cadres, towards the likes of ABM.

Understanding this to be the case, ABM has called on Egypt’s Muslims “to come together around their mujahideen brothers in their war against” the security forces. It remains to be seen whether ABM’s attempts to garner more widespread support will succeed. Nonetheless, the group clearly understands that targeting civilians in the current atmosphere would turn away prospective fighters.

Some have noted that the current violence in Egypt is reminiscent of the 1990s jihadist campaign headed by al-Qaeda affiliated groups—al-Jama’a al-Islamiyya and Egyptian Islamic Jihad—against the Mubarak regime. While there are some similarities with today’s violence, there are several key differences. Most notably, in the 1990s, there were numerous attacks that directly targeted civilians and foreigners. Such attacks, in particular the November 1997 Luxor Massacre, turned Egypt’s public against the Islamist militants. The backlash even led a contrite al-Jam’aa al-Islamiyya to announce in early December 1997 that it would no longer target tourists.

Thus far, ABM has demonstrated a keen understanding of Egypt’s historical battles with jihadists. That is why, for now and for the foreseeable future, ABM’s target selection will likely remain limited to security sites and personnel. As reflected in the group’s own missives, the success of its efforts to draw disenchanted Islamists into the fight, as well as the durability of its battle plan, may depend on it.

David Barnett is a research associate at the Foundation for Defense of Democracies, where he focuses on Salafi jihadists in Egypt’s Sinai Peninsula. He tweets at @dbarn225.

Image: Photo: Aftermath of the bombing of the Cairo Security Directorate