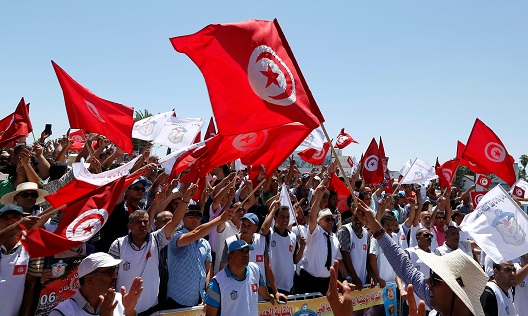 Since mid-March, the governorate of Tataouine in southern Tunisia has witnessed a state of social unrest and a persistent protest movement demanding the right to work and the right to development and equitable distribution of wealth. In Kamour, an important transit point for the oil and gas companies operating in the Tunisian desert, approximately 110 km from the city center, this movement has transformed into an open ended sit-in that began April 3 when protesters started demanding twenty percent of gas revenues for the development of the area and employment opportunities for the governorate’s residents.

The government reached an agreement with protesters in June in return for its pledge to employ 1,500 young men from Tataouine and to allocate 80 million Tunisian dinars to the governorate’s Development and Investment Fund. Nevertheless, these protests raise many questions about political stability in Tunisia, particularly with the decision of the Tunisian president on May 10 to deploy the army to protect vital oil installations to “preserve the prestige of the state.”

The Tataouine protests are just one element in the cycle of conflict between the government and the residents of marginalized areas. In May alone, Tunisia bore witness to 1,533 protests in these areas. Unemployment in the Tataouine region stands at thirty-two percent, fifty-one percent among degree holders, one of the highest rates in Tunisia. As protesters in Kamour claim their right to twenty percent of the exploitation of the wealth of their region, this explains the continuing unrest and the protests’ evolution into an open sit-in where angry youth are trying to push the watchful government to yield to their demands by cutting off production flows and the transport of oil and gas in the strategic region that contains forty percent of Tunisia’s oil wealth. The sit-in has also negatively impacted foreign investments in Tunisia’s energy sector, where oil companies have decided to withdraw workers or sell off portions of their investments, further complicating the country’s already fragile economic and financial situation. Tensions also rose after deployed armed forces sent to protect oil facilities clashed with a group of young protestors in Kamour.

The ongoing protests in the Tunisian interior six years after the uprising that toppled the Ben Ali regime can be traced back to increased discontent of marginalization and exclusion. Since Tunisian independence, development plans focused on coastal areas at the expense of the rest of the country. This policy of marginalization became more complex after Zine El Abidine Ben Ali came to power in 1987, when the state adopted a two-pronged model for development based on the export of low-value commodities and the development of tourism, which led to a focus on the infrastructure of coastal and nearby areas. As a result, the agricultural sector, the most important economic activity in Tunisia’s interior, contributing to the employment of 16.3 percent of the labor force and making up 8.15 percent of GDP, was neglected. Neglect towards the country’s interior has gradually transformed it into a human reservoir of low-cost labor steered into extractive industries and the service sector located in coastal areas, where cities like Tunis, Sousse, and Sfax make up eighty-five percent of GDP.

Post-uprising governments have yet to realize the aspirations of the people of the interior for social justice and job creation, despite their emphasis on the priority of regional development. The state has however taken quick but ineffective measures, most of which focused on youth employment in the public sector, which only prolonged and aggravated the situation further. Economic indicators show that the imbalance in development between regions continues, with unemployment reaching thirty percent in the interior, while the national average sits at 16.5 percent. Economically, only thirteen percent of foreign companies in Tunisia are found in the poor areas of the interior, accounting for only sixteen percent of total jobs in these areas. The lack of equitable distribution of investment geographically has negative social repercussions contributing to rising poverty rates in the interior that are sometimes twice the national average.

Corruption remains the greatest challenge in Tunisia despite attempts to disrupt networks of corrupt actors in central and local governance. For example, corruption in government contracting alone costs the treasury a total of two billion Tunisian dinars, or $800 million, according to the National Anti-Corruption Commission. Its concentration within institutions centrally charged with the decision making process is negatively affecting investment directed to the interior. These networks of government officials and businessmen exert influence over the country’s capabilities, particularly in the area of loans and licenses, which are economically profitable and have the power to influence the policies of the public administration both centrally and locally.

From Talk of Development to Talk of Militarization

The repercussions of the regional unrest that followed the Arab uprisings further complicated the economic situation in the internal borderlands. Extremist groups took advantage of the collapse of central authority in Libya while al-Qaeda affiliates returned to work the border, creating a triangle between Tunisia, Algeria, and Libya for smuggling weapons and fighters and requiring security solutions from the Tunisian government. The resurgence of extremist groups in the borderlands has also negatively impacted the lives of the residents of those areas who have practiced various types of cross-border smuggling for decades as a socio-economic model for overcoming the absence of local development. Most of these activities were carried out with the complicity of interconnected networks involving local security officials and businessmen representing the most powerful tribes along the border. However, since 2013 security threats escalated to clashes with Tunisian security forces along the border with Libya and Algeria; shifting the conversation from a discussion about the need for development in border areas to a debate focusing on the need to militarize the border with Libya and Algeria. This new focus is reflected in a security strategy to dismantle smuggling networks, which significantly reduced cross-border activities. The security strategy also eliminated illegal earnings families depended on and the government did not provide legitimate alternatives to compensate residents; confirming their belief that the state views them as residents of a buffer zone only to be dealt with on security terms.

The angry youths followed through on their threats to disrupt the production of national wealth and reflects the extent of their despondency towards the central authorities; who they consider complicit in the plundering of the state’s wealth. On the one hand, there is the real threat that these protests coincide with an upsurge in regional discourse in Tunisia, giving rise to the possibility of marginal areas—especially the borderlands—becoming areas where the state exhibits only limited sovereignty and authority over these territories. On the other hand, the anger of the youth and the erosion of the state’s legitimacy may be an opportunity for extremist cells to recruit young people into their ranks.

Confronting this new reality, and its associated threats to Tunisia’s stability, requires in-depth reform, particularly for local governance structures to enable them to keep pace with the implementation of local development policies in coordination with specialized sectors. It also requires the political will to enact change within state institutions suffering from corruption which limits their ability to enforce the law, control the economy, ensure the equitable distribution of resources, and boost the effectiveness of these institutions which suffer from poor coordination. Enacting these reforms could increase the prospects for achieving a vision consistent with regional development.

Walid Namane is a senior analyst at the Delma Institute, an Abu Dhabi-based international studies institute.