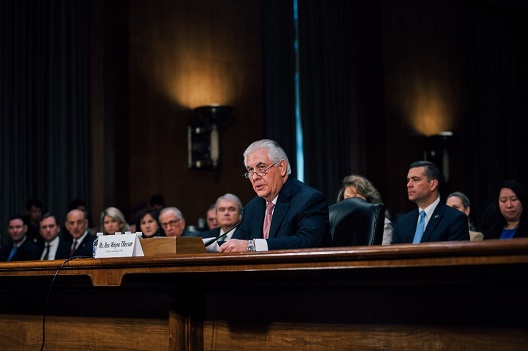 On January 11, President Elect Donald Trump’s nominee for Secretary of State, Rex Tillerson, participated in a marathon nine-hour confirmation hearing before the Senate Foreign Relations Committee. The committee members pressed the former ExxonMobil CEO on a host of issues, including his reported ties to Russia and his views on extremism.

On Syria and ISIS

During the hearing, Tillerson said that defeating the Islamic State (ISIS or ISIL) should be the United State’s top priority in the Middle East. “There are competing priorities in this region which must be and will be addressed, but they must not distract from our utmost mission of defeating ISIS,” he said. When pressed about regime change in Syria, he said that the United States should focus first on defeating ISIS, and then address the future of the Assad regime.

Tillerson referenced Libya and Iraq in his remarks on regime change in Syria. “Any decision to effect a change of leadership in a country by force cannot be taken lightly… In the case of Libya I think that was the failing in the decision to change the regime there.” He referenced the US war in Iraq, saying that said the decision to use force after a leadership change could imperil the lives of American soldiers. He said US involvement in Iraq neither enhanced US national security nor helped to stabilize the Middle East. Still, Tillerson indicated that he would support an authorization for the use of military force (AUMF) by the president against ISIS if Trump chose to pursue such a policy. Several members of the Senate Foreign Relations Committee have called for an AUMF, and Tillerson said that in such a case, he would seek to engage with Congress in order to put more forces on the ground in countries in which the United States is fighting the terror organization.

Some of Tillerson’s comments on Russia suggested that he may be willing to cooperate with the country, which has intervened on the side of Assad, against terror groups in Syria. “Where cooperation with Russia based on common interests is possible, such as reducing the global threat of terrorism, we ought to explore these options,” he said. Still, at other times Tillerson seemed to come close to condemning Russian action in Syria. In his opening remarks, he said the United States should be “clear-eyed” about the relationship with Russia, which has “supported Syrian forces that brutally violate the laws of war.” He added that NATO allies are correct to be concerned by a “ resurgent Russia.”

Senator Marco Rubio (R-FL) questioned Tillerson on Russia’s involvement in Syria. He listed indiscriminate actions that Russia’s military has taken against civilians in Aleppo, calling them war crimes. However, Tillerson refused to agree with Rubio. “I would not use that term,” he responded when Rubio asked whether Russia’s actions in Syria make Vladimir Putin a war criminal. While Rubio said it “should not be hard to say that Vladimir Putin’s military has conducted war crimes in Aleppo,” Tillerson said he would want more information from intelligence agencies before coming to such a conclusion. He also stopped short of condemning Russian repression towards its own dissidents. “People who speak up for freedom…are often a threat and these things happen to them,” he said in response to Rubio’s pressing questions on Russia.

Overall, Tillerson spoke repeatedly of the threat the United States, and the Middle East, faces from ISIS. His comments suggested a policy of focusing on fighting ISIS and Islamist extremist groups, but he did not bring up long-term strategies to address what many analysts see as the underlying causes that give root to extremism, such as poor governance.

On Turkey and the Kurds

Tillerson repeatedly asserted that a lack of US leadership in the Middle East provided Russia with an “open door” to assert its influence in the Middle East. He said that the United States should “re-engage” with Turkey’s President Recep Tayyip Erdoğan and make clear to the Turkish leader that the country’s sustainable alliance is with the United States rather than Russia. He blamed the absence of US leadership for Turkey’s nervousness in the region and its turn to Russia.

However, other comments by Tillerson may not be welcomed by Turkey. Tillerson said that the United States should “recommit” to the Syrian Kurds who are cooperating with the United States to fight ISIS in Syria. The People’s Protection Units (YPG), a militia of the Kurdish political party Democratic Union Party (PYD), is a member of the Syrian Democratic Forces, the main US partner on the ground in Syria. The PYD is linked to the Kurdistan Workers’ Party (PKK), which both the United States and Turkey designate as a terrorist group. Tillerson called the YPG “our greatest allies” in constructing a coalition that can combat ISIS in Syria. Yet just days earlier, Turkish Foreign Minister Mevlut Cavusoglu said Ankara expects the Trump administration to end its cooperation with the YPG. A spokesperson for Erdogan also lashed out against US support for the YPG on January 12, saying the United States “must stop trying to legitimize a terrorist group.”

During his opening remarks, Tillerson said that defeating ISIS is the most urgent step needed toward combating radical Islam. He said that following the defeat of ISIS, the United States should focus attention on “other agents of radical Islam” such as al-Qaeda and the Muslim Brotherhood. His statements echoed rhetoric from other Trump advisors, such as National Security Advisor Michael Flynn, conflating international, political Islamist organizations as radical extremist threats.

Notably, on January 10, Senator Ted Cruz (R-TX) introduced a bill that would request the incoming secretary of state to designate the Muslim Brotherhood as a terrorist organization. Trump advisor Walid Phares indicated during the campaign season that a Trump administration would pursue such a policy. Tillerson’s rhetorical grouping of ISIS and the Brotherhood suggests that as secretary of state he could comply with such a request, should the bill pass. While the idea behind Cruz’s bill is not new, past administrations have fallen short of designating the Brotherhood as a terrorist organization, choosing instead to recognize the distinction between political Islam and radical Islamist groups.

When pressed about a registry for Muslims in the United States by Senator Jeanne Shaheen (D-NH), an idea Trump  introduced during his campaign, Tillerson sought to provide a middle-of-the-road response that addressed threats to the United States more generally. “I would need to have a lot more information about how such an approach would even be constructed. And if it were a tool for vetting, it probably needs to extend to other people as well, other groups that are threats,” he said. Tillerson also said that the United States should support Muslims that “reject radicalism” in order to win what he called “the war of ideas,” a phrase he brought up repeatedly in reference to Muslims in the United States and Islamist groups more generally. Tillerson said his “appreciation” for Islam is what led him to make a distinction between supporting moderate Muslim voices and more radical voices.

Some rights groups worry that President-Elect Trump’s vision of US international involvement seems to leave little room for support for human rights. During the hearing, Tillerson stated that the United States does not face “an ‘either or’ choice on defending global human rights.” he emphasized that US values should be the same as US interests when it comes to human rights and US humanitarian assistance. Still, Tillerson’s remarks did echo Trump’s emphasis on national security. He said it would be “unreasonable” to expect all foreign policy decisions to be driven by human rights considerations, especially in cases related to US national security.

Senator Rubio pressed Tillerson on the issue of human rights in Saudi Arabia, calling the country a “human rights violator,” referencing restrictions on women’s rights and religious freedom, to which Tillerson reponsded that he would need more information to determine whether the country is violating human rights. He said that during his many trip to the country during his time with ExxonMobil he had seen progress and change take place in what he said was the right direction.

Elissa Miller is an Assistant Director at the Rafik Hariri Center for the Middle East.
Emily Burchfield is an intern at the Atlantic Council’s Rafik Harir Center.

Image: Photo: Rex Tillerson during the Senate confirmation hearing. By Office of the President-elect [CC BY 4.0 (http://creativecommons.org/licenses/by/4.0/deed.en)], via Wikimedia Commons