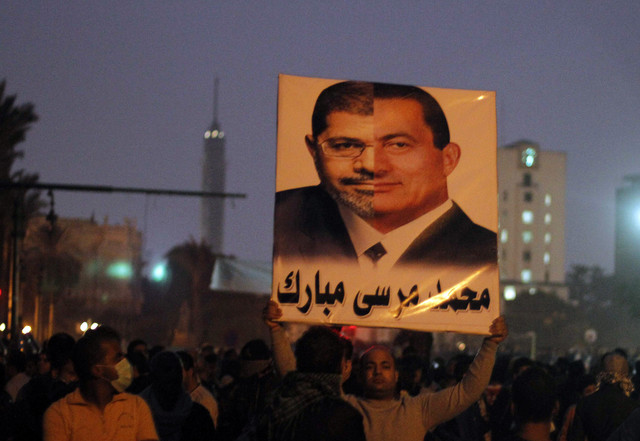 Mohamed Morsi may be a new president but he’s developing a very steep learning curve. Last Thursday, possibly buoyed by his success in negotiating a ceasefire in Gaza, Egypt’s President Mohamed Morsi released a new constitutional declaration giving himself almost unlimited, if supposedly temporary power. The declaration says that any law or decision issued by the president is exempt from revocation by any other party or institution. It also says that the existing Shura or Senate Council and the much-beleaguered Constituent Assembly may not be dissolved by any court order, thereby preempting verdicts, expected early next month, on both bodies.

More disturbingly, in Article 6, he has given himself the power to employ all “necessary procedures and measures” needed to confront any “danger threatening the January 25 revolution, the life of the nation, national unity, safety of the nation, or curbing state institutions in performing their roles." That sounds like an emergency law.

Contrary to the claims of his many detractors, Morsi is not acting in a vacuum. As far as its democratic transition is concerned, the country is in a state of near paralysis. The democratically elected parliament was dissolved on a technicality of the electoral process, leaving Egypt with no legislative body, and the economy is buckling at the knees.  If the Islamist-majority Constituent Assembly were to be dissolved, the democratic transition would be delayed for an unknown period. As of the beginning of the week, less than a third of the Assembly remained, the rest having walked out. The draft of the constitution that it has produced was unacceptable, for one reason or another, to a spectrum of members, comprising liberals, secular, Christians, feminists and human rights and labor activists. However, Egypt’s opposition has failed, miserably, to put aside its own differences and come up with a cohesive front.

The current constitutional declaration clearly states that if the constituent assembly fails to complete its task in the allotted time (six months, about to run out) then Morsi would have to personally appoint a new one. Given the open rejection of the current formation, the chances of any assembly he appoints achieving favor, or, more importantly, success, are extremely slim. It would be another misstep.

It would not be the first. While this latest decree essentially negates the role of the judiciary altogether, Morsi has attempted to clip their wings twice before, once when he attempted to reinstate the dissolved Parliament and again when he attempted to sack the Prosecutor General. Both attempts resulted in an undignified scuttle backwards; they were both quashed by the judiciary. This time, the Judge’s Club (an informal syndicate) has declared that Egypt’s judges are on strike in protest against the decree.

While the judiciary currently stands between a possible democracy and a probable dictatorship there can be little doubt that there has been a degree of politicization about its decrees. However, the accusation (often bandied about by a Muslim Brotherhood irate at what it sees as judicial malice aforethought) that the judiciary is merely a selection of Mubarak appointees is simply untrue. The Supreme Constitutional Court, which was to rule on the Constituent Assembly, is a diverse group and has largely acted to fend off institutional threats. If Morsi was again taking aim at the judiciary, he used a shotgun when he ought to have used a blow dart. In an effort to get the judiciary off his back, he has terrified and aggravated swathes of the population. More embarrassingly, it has brought condemnation from the obvious (opposition and human rights) and the not so obvious (Ahmed Fahmi, a member of the MB’s Freedom and Justice Party, the head of the Shura Council and Morsi’s cousin).

Oddly enough, Morsi’s decree was clearly crafted to appeal to many. It mandates the sacking of the Prosecutor General (a much-despised figure who has been unable to bring convictions against former regime defendants) by retroactively recognizing the end of his term in office and appointed a new one. He has also increased pensions and compensation for revolution-related victims and reopened trials of former regime members. The declaration is very specific in noting that it is time-limited (all the above is only viable until a new constitution has been voted on and a new parliament is elected).

His supporters say he has taken a necessary step to ‘save the revolution.’ He might very well be trying to do so, but considering that the revolution came about because Egyptians were fed up with a man who gave himself dictatorial power for two generations, this is a difficult path to tread safely. Morsi’s supporters insist that he is a good man, whom Egyptians must trust will work for Egypt’s interests.

However, people don’t vote for a politician because they “trust” him. People vote for politicians because they hope they will achieve their needs and aspirations, because their politics align, and sometimes because they kissed the right baby while campaigning. People do, however, trust that their countries have institutions in place to prevent decisions based on individual biases, to help their candidates perform optimally, and to hold them accountable when they don’t.

This is especially pertinent when one considers that the MB does not have a huge backlog of trust where political promises are concerned. Egyptians remember MB politicians promising to contest only 30% of parliament, a figure which rose to 50% then 60% before the organization said it would contest almost all the seats. They also remember the MB insisting it would not field a presidential candidate, before fielding two. Activists remember perceived MB collaboration with the Supreme Council of Armed Forces at the expense of all other parties. And to make matters worse, many are aware that parliament was dissolved on a technicality that was largely the result of the MB’s greed in running party candidates on the independent tickets. So when Morsi promises to be a dictator for “a couple of months” – few believe him. Particularly since under the most ideal circumstances his decree could offer, Egypt wouldn’t have a parliament up and running in under eight months.

At time of press, various foreign press articles were reporting that Morsi had backtracked on his decree, claiming that judicial immunity referred only to sovereign decrees, which do not need judicial oversight (in this case, including the Constituent Assembly and Shura Council). This is not so. Morsi may very well be looking for a face-saving option to gently back away but despite the above option seeming a reasonable possibility, the judges have yet to release a statement. The situation is in desperate need of sensible negotiation, on all sides.

However ill-considered the decree, it has produced one fact in Morsi’s favor. After two years in internal bickering, it has finally united Egypt’s divisive and inept opposition.