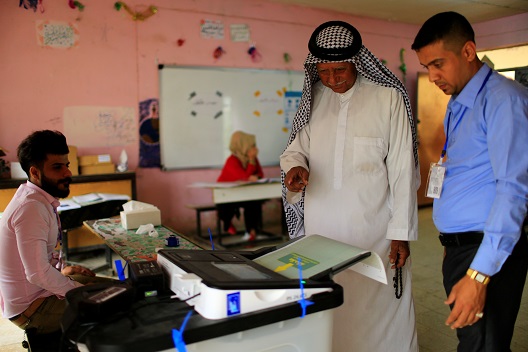 Some commentators recently celebrated the Iraqi election as a sign that democracy is taking root in Iraq’s soil. This optimistic view is justified given the bleak situation of democratic transformation in the region. Authoritarianism in the Middle East persists as the common model of governing, even in countries that witnessed popular uprisings and demands for regime change just a few years ago.

At a time when the current US administration appears to have abandoned democratization as a key foreign policy objective—discrepancies in previous administrations’ commitment towards this objective notwithstanding—Iraq’s fifth general election should be a welcome development.

This positive impression is underscored by the fact that the election was highly competitive, conducted in largely peaceful means even in areas that a few months ago were under the control of the Islamic State (ISIS), and ended with results that were not favorable to the current prime minister’s coalition.

However, these positive signs should not be taken as an indicator that Iraq’s trajectory towards democracy is guaranteed and irreversible. Indeed, this election has clearly shown the limitations of Iraq’s democracy and the persistent risk of disruption or regression towards less democratic means in the future.

The election’s official results were contested on a scale that damaged their credibility. Unlike the 2010 parliamentary election, when the main complaints came from Nuri al-Maliki’s State of Law, this time multiple groups objected to the results, perhaps reflecting the nature of competition which took place amongst relatively small coalitions. Kurdish parties such as Gorran, Kurdistan Islamic Groups, and Democracy and Justice, protested irregularities and alleged fraud attributed to the two major parties in Kurdistan: The Democratic Party of Kurdistan (KDP) and the Patriotic Union of Kurdistan (PUK). Several Arab and Turkmen, Sunni and Shia groups, including Maliki’s State of Law, Ayad Allawi’s al-Iraqiya, the Turkmen Front and Hanan al-Fatlawi’s Irada, have also questioned the integrity of the polling process. Unsurprisingly, in the multi-ethnic Kirkuk, the protests took a dangerous turn when, according to reports, gunmen besieged some polling stations and their staff, demanding a recount of vote, after allegations of massive fraud committed by PUK.

In the ten days since the elections, the mostly partisan Iraqi TV networks, have hosted former members of parliament and candidates accusing the Iraqi High Electoral Commission (IHEC) of rigging the results in favor of other candidates, of failing to investigate substantial irregularities in some polling centers, and even claiming that the electronic voting system the IHEC used for the first time was hacked. A full range of bizarre and serious accusations were directed against IHEC and political rivals, culminating in the drafting of a law by 156 MPs nullifying the election results—a legally questionable and theatrical move.

Based on interviews I conducted with IHEC members, many of these accusations can be dismissed as a manifestation of the losers’ dystopian views. But there is no question that some of these results invite serious investigation. The head of the Shams Network for Election Monitoring in Iraq, an independent monitoring group, said in an interview on al-Sharqiyya that they noticed substantial flaws in the electoral process, which IHEC failed to address.

It can be simply argued that every election witnessed similar complaints, but the optimistic view would assume that Iraq’s fifth parliamentary election since the fall of Saddam Hussein should reflect the democratic evolution, the accumulation of experience by organizing institutions, and the internalization of democratic values and behaviors by political rivals. The reality, however, is different. For example, IHEC, originally formed as an independent body, is now headed by a board whose members are chosen by partisan quota, which implies the existence of links between them and the big parties that selected them. Despite the experience acquired by its staff, the institution failed to act proactively and position itself as a trustworthy and neutral actor.

While most claims about the electronic voting system are baseless, the commission did not properly handle doubts about this system, including those raised by the UN advisory team. Nevertheless, the main issue lies not with IHEC and its performance, but with political groups that insist on depriving IHEC of its independence in the first place, and fail to genuinely commit themselves to the rules of free and fair competition.

After 13 years since the fall of Saddam Hussein regime, major Iraqi parties are still a long way away from being described as democratic entities. Most of these are patrimonial formations, controlled by one family or individual and grouped through patronage rather than ideology or political creeds. Rather than evolving into transparent, democratic and rule-respecting parties, they seem more comfortable operating on the borderline between formality and informality. They seek to gain official positions in parliament and government while keeping militias and business networks working in the shadows; to be represented in the highest echelons of formal institutions without sharing their domains of influence with others.

Notably, the two Shia coalitions that won the most seats, Sadr-led Sairun and Amiri-led Fateh, and the Kurdish groups that won the most seats in Kurdistan and Kirkuk, KDP and PUK, have militias operating either outside the formal military structures, or in complex configurations with them. While there is still no conclusive evidence that parties’ military wings impacted the electoral results, one can deduce that parties with coercive power will always have an advantage over others that do not have them. Strikingly, rather than working to end informal military organs in order to secure freer and fairer elections, some groups, such as Goran, said they are now considering establishing their own military wings in order to compete with the two ruling parties in Kurdistan.

Even if the polling process was relatively free, the context within which the elections were conducted was not. There are no clear applicable rules organizing campaign funding, which often plays to the advantage of established parties and their business networks and partners. Parties did not publicly reveal the amount of their donations or their sources. Even if there were rules clearly organizing campaign funding, it is unlikely they would abide by them. Their ability to manipulate the rules has manifested in several ways, including in the claim of the Dawa party that it would not run in the elections while having its leaders and members participating in them—a legally dubious arrangement that IHEC could not oppose.

This is not a call for pessimism or a dismissal of the hopeful signs that the May 12 election revealed. It is a cautious reminder that democracy requires much more than occasional elections to become more rooted and not easily reversible. Iraq is still lacking strong institutions and, as the controversy about IHEC indicates, even if these institutions exist they continue to be weakened by highly contentious partisan politics and the lack of a reliable justice system. When parties manage to get away with electoral fraud, simply because they have resources and armies to make it difficult for others to challenge their victory, it is hard to see elections as a tool for peaceful political change. Most Iraqi voters who decided not to vote seem to have reached this conclusion already: elections don’t matter and will not bring about change.

The commitment of Iraqi parties to elections is not so much an outcome of their internalization of democratic values as their inability to singlehandedly dominate the system through other means. Rationally, participating in elections continues to be less costly than not. But this is hardly a stable formula on which democracy can flourish, especially in a context where elections are used to reproduce the dominance of patrimonial and deeply undemocratic actors and where independent institutions tasked with rule-making and monitoring are politicized or deprived of their authority. Similarly, the fact that Iraq has not seen a military coup can be mainly attributed to the weakness of Iraqi military vis-a-vis paramilitary groups, rather than the normalization of the separation between the military and civil domains.

Iraq’s road to democracy is still long, and while this election could be seen as a step forward, it has also underlined the fragilities and setbacks that might result in further disillusionment with the formula of “election without change,” or a full regression to non-democratic means when the delicate balance on which the electoral process is grounded will significantly change. It is still too early to celebrate an Iraqi democracy.

Image: An Iraqi man casts his vote at a polling station during the parliamentary election in the Sadr city district of Baghdad, Iraq May 12, 2018. REUTERS/Thaier al-Sudani