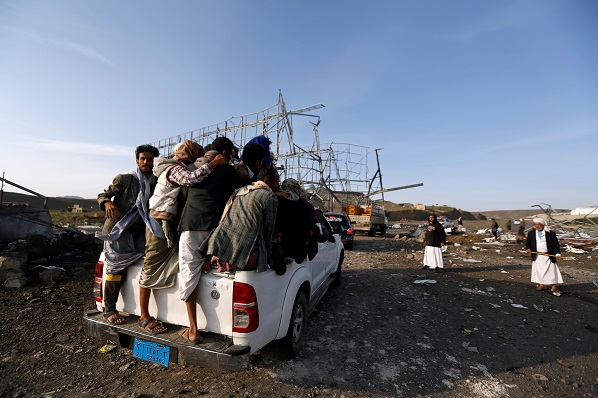 Despite the two previous unsuccessful attempts to pass a draft resolution to establish a UN independent international investigation commission into possible Yemen war crimes, sixty-seven Human Rights groups recently initiated another call demanding the establishment of the inquiry commission. The call for a commission is unlikely to be successful, but if it is formed it runs the risk of being hijacked by state interests and failing to hold accountable certain actors, particularly members of the Saudi-led coalition who wield influence at the United Nations.

Around 10,000 civilians have been killed in Yemen’s war—what the United Nations called the largest humanitarian crisis in the world. Oddly, different UN bodies report different numbers. Last year a UN OCHA official stated that 10,000 civilians have been killed in Yemen since March 2015 (OCHA confirmed to MENASource that the number referred to civilians since some sources simply stated “people”). However, a September 2017 UN Office of the High Commissioner for Human Rights (OHCHR) report claimed that only 5,000 civilians have been killed since March 2015. Interpreting the changing number is difficult. OCHA gathers its data from health facilities, but OHCHR did not report its methodology. If, for example, they are conducting site visits, then being denied access to certain areas, a practice both sides in the war have used, would limit their ability to gather accurate data.

The United Nations’ track record on Yemen’s civil war shows that it has often dodged key issues, leading critics to say it is beholden to state interests. Several reports by international Human Rights groups show that all belligerent parties have committed atrocities that could amount to war crimes. Nonetheless, these reports have made remarkably little difference at the UN Human Rights Council (UNHRC) or other top UN bodies. In 2015, the UNHCR adopted what Human Rights Watch called a “deeply flawed resolution,” abandoning a Dutch-led draft resolution to create an independent commission, due to pressure from Saudi and “insufficient support” from permanent Security Council members the United States and United Kingdom. The resolution that was passed created an inquiry body led by Saudi Arabia and Riyadh-based Yemeni government—allies in the war against rebels—that has not produced any significant reports. In 2016, the UK blocked another call to establish an independent international inquiry. This futile battle for a more rights-based approach reflects what powerful UN state members want influences the future of any accountability process in Yemen war.

If the current call for a commission is successful, it will likely result in a heavily biased body. The risk, then, would be that the commission would not only fail to properly investigate possible war crimes, but that by failing to do so it could also legitimize some of the belligerent parties and their actions and worsen the conflict. The UN decisions up until now show just that.

In 2011, the United Nations, with the help of the Gulf Cooperation Council (GCC), co-led a power transfer deal. However, the deal did not include any transitional justice process, and granted impunity to former president Ali Abdullah Saleh and members of his close circle. This opened the door for Saleh to continue to fuel internal conflicts. In 2015, the passing of 2216 UN Security Council (UNSC) Resolution gave an international legitimacy to the Saudi-led coalition military operations backed by two of the world’s most powerful UN state members: the United States and United Kingdom. The impetus for the resolution was a letter by president Hadi to the Security Council, pleading for the GCC “to immediately provide support, by all necessary means and measures, including military intervention, to protect Yemen and its people from the continuing aggression by the Houthis.” Although Resolution 2216 was framed in terms of peace and stability for Yemen, the specific criticisms were directed at the Houthis. The resolution declared support for the GCC’s efforts and imposed an arms embargo on Saleh and Houthis. Only the Houthis were called on to disarm. The resolution was passed under Chapter VII of the UN Charter, opening the door for international intervention and legitimizing the Saudi-led coalition’s military approach. While political and military domestic conflicts are not a novelty in Yemen, legitimizing the international military intervention without a mechanism to ensure the protection of rights undermines traditional, local conflict resolution mechanisms, and worsens the humanitarian crisis.

The United Nations’ systematic failure to take positive steps to hold the Saudi-led coalition responsible is because it is subject to the nation-states it represents and dependent on their funds. Saudi, for instance, was able to force the United Nations to withdraw the Saudi-led coalition from the annual UN “list of shame” for violations against children in Yemen. The withdrawal supposedly came after Saudi threatened to pull hundreds of millions of dollars in assistance to the United Nations, although Saudi denies doing so.

Further undermining the UN processes on Yemen is that one of the UNHRC’s current members is Saudi Arabia, which holds the position despite a poor human rights record and being rated as “not free” in Freedom House’s annual report, Freedom in the World. The position is supposed to give it the opportunity to promote and protect human rights, and enforce UN human rights mechanisms; but Saudi has instead used it to prevent the UNHRC’s Special Procedures from visiting Saudi and arrested Saudi citizens who have spoken at the UNHRC.

The United Nation’s behavior on Yemen is not unprecedented. In the Sri Lankan civil war (1983-2009), the UN failed to protect civilians and showed a lack of political will to stop atrocities when it could, mainly under pressure from the United Kingdom, which was preserving its colonial relation to the South Asian region. A contemporary example is the UN Security Council’s failure to take any decisive action to end the war in Syria.

Without full political backing, a commission of inquiry will likely be fruitless. Last month, Carla del Ponte resigned from the UN commission of inquiry in Syria, stating that lack of political support from the Security Council made the task impossible. Realizing these challenges, and the fact that the dynamics at the UN have posed dramatic consequences into Yemen conflict, the United Nations should consider how first to push Saudi Arabia, the United States, and United Kingdom to demonstrate a political desire in ending the Yemen war. The United Nations can capitalize on its role as a mediator and bring the focus to long term human and financial costs, as well as the fact that the destabilized country is fertile ground for extremist groups. To end Yemen’s war and stabilize the country requires a well-thought out approach that balances the need for security with transitional justice and establishing a responsive, democratic government. This is no small task, but the first step is convincing the Saudi-led coalition this is in its best interests.

Image: Photo: People ride on the back of a truck near a checkpoint of the armed Houthi movement hit by a Saudi-led airstrike near Sanaa, Yemen August 30, 2017. REUTERS/Khaled Abdullah