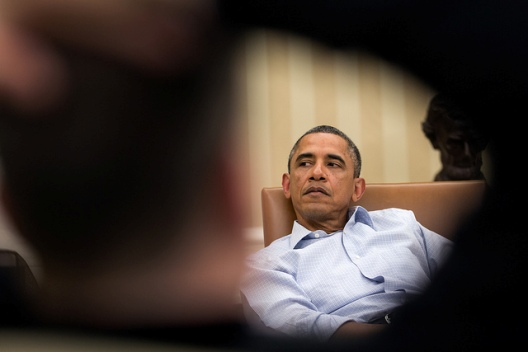 Considerable criticism of President Barack Obama’s administration emerged following the White House’s conclusion that “the law does not require [the administration] to make a formal determination as to whether a coup took place” in Egypt. In a press conference following the Thursday announcement, asked as to whether the administration would ever render a judgment on the coup issue, State Department Spokesperson Jen Psaki declared, “We have determined we are not going to make a determination.” The commentariat, which had bounced the question of “coup or not-coup” around for three weeks, was left with what could be seen as just another instance of fecklessness on the part of the administration.

In effect, the White House adhered to a key rule of politics—do not take a public position on a contentious issue unless necessary. However, while the administration is arguably correct that it is not in the current interest of the United States to make a determination on the “coup-or-not-coup” question, the reticence this response shows is the latest in many examples of public hesitancy relating to important events in Egypt. (Secretary Kerry’s recent comment on the military “restoring democracy” in Egypt notwithstanding, which was characterized as Kerry “[not sticking] to the script.”) If the United States’ desire is to see Egypt emerge from the political tumult of the past two-and-a-half years with a functional, democratic system that protects the rights and safety of all Egyptians, it must make the case more clearly than it has so far.

This adjustment would require more public pronouncements—and even judgments—regarding events within Egypt. It would not, however, require the United States to take sides in internal Egyptian politics. Instead, statements from the United States should focus on specific events and actions and the ways in which they violate accepted standards of democratic governance, equal justice, human dignity, and human rights.

What would such commentary have looked like in the past? It would have taken the form of a strong, public response to the speeches made at the June 15 National Conference for the Support of the Syrian Revolution, which was attended by then-President Mohamed Morsi. A number of speakers made extremely divisive, incendiary statements concerning Shia Muslims from the podium, and Morsi, who took to the stage after these speakers, expressed no condemnation of their remarks. The United States would not have been “taking sides” politically by clearly stating that such behavior by the leader of any country is not acceptable.

Going back to November 2012, a commitment to such commentary would have entailed a stronger response to the November 22 declaration made by Morsi that effectively placed the actions of the presidency above any form of judicial review (among other clear violations of democratic norms). The evident goal of this declaration—to secure the ability to push forward with a highly contentious draft constitution—made his action even more deplorable. The United States’ official response was vague, avoiding any direct mention of the action or why it was objectionable. Given the opportunity to characterize the action simply as “non-democratic,” spokesperson Victoria Nuland demurred and referred back to the boilerplate text of the official statement.

It is not Morsi alone who has taken actions worthy of stronger response, of course. Another of many opportunities for more direct speech came after the October 2011 deaths of more than twenty people, primarily Coptic Christians, who were demonstrating in Cairo after the destruction of a church in Aswan. At the time, the Supreme Council of the Armed Forces was governing Egypt, and military personnel openly participated in the bloody assault against demonstrators. Both the official White House response to the event and the US Embassy’s statement were worded in such a way that they could pass without anyone taking note of the incident. Indeed, after expressing deep concern, offering condolences, and calling for restraint on all sides, both statements concluded simply by declaring, “We note Prime Minister [Essam] Sharaf’s call for an investigation, and appeal to all parties to remain calm.” These comments made it seem as though the United States could not even express approval of, or encouragement for, starting an investigation into the event.

While it is politically convenient to not make many public declarations, it inevitably causes people to doubt your intentions. Publicly, many Egyptians seem convinced that the United States is supporting every side except whichever side they are on. This is not good for anyone—the United States should not want to be seen as taking any side politically, and it should rectify this through more clear and consistent speech that addresses the actions of all actors. Of course, it may be the case that some groups’ behavior causes them to more often be the targets of such speech. This reality cannot be avoided, and it should not cause the United States to feel that, due to a desire for “balance” in its words, it must hold back from repeatedly calling out certain actors. If, as the case may be, certain actors were more habitual violators of democratic norms and human rights, then any perceived “imbalance” in US statements would be purely a consequence of the violators’ own actions, not any bias on the part of the United States. If all offenders were to receive criticism in equal measure to their own actions, then any appearance of “imbalance” would not be the fault of the observer.

In some cases, the geopolitical interests of the United States may indeed make it appropriate to refrain from making a statement on an event. It is also always in the United States’ interest to make strong claims only on the grounds of strong evidence. These interests cannot, however, make it correct to habitually refrain from clearly and specifically calling out clear violations of democratic norms and human rights. The United States has an interest in being regarded as a country that upholds democratic norms and human rights, and it cannot be so regarded when it has so often determined not to make any determinations.

David Johnson works as the Research Director for the Tahrir Institute for Middle East Policy.