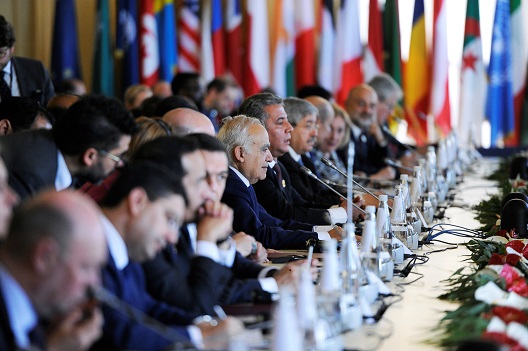 An unmistakable sense of despair and gloom accompanies most news reports and literature on the state of affairs in Libya after 2011. The Arab Spring was meant to usher in a period of unprecedented change after decades of notoriously undemocratic leadership across the Middle East and North Africa. Yet, seven years later, there has been very little positive development in terms of transparency, accountability, and inclusivity in the Arab world. No Arab Spring country, however, has fared worse than Libya, whose revolt, ironically, was more of a NATO-supported war than a genuine home-grown revolution with protracted battles which have essentially torn the oil-rich North African nation to shreds.

The Libyan chaos started in early 2011 and followed the revolts in both Tunisia and Egypt. The violent revolt in Libya, however, was and still is different. It began with violence, as a civil war between those who were pro-Muammar Qaddafi and those who opposed him. The denial of this fact had two consequences.

First, the international community became willing to accept the idea of interfering in the war under pretexts that have since been proven false. First, France and Qatar convinced the United States and others to intervene early, claiming an urgent need for a no-fly zone to protect civilians from bombardment by the Qaddafi air force—a danger later proven to be almost entirely based on exaggerations or outright fabrications. In fact, it was denied publicly by the head of the then Libyan Transitional  Council after the fall of Qaddafi and which was recognized internationally as the legitimate government.

Second, the denial of the fact that it was indeed a civil war that unleashed revenge instead of political transition delayed serious national reconciliation and the disarmament, demobilization, and reintegration of those militias that had taken up arms and were supported by an extensive NATO bombing campaign. Failing to take those steps caused a rise in protracted battles between hundreds of armed groups, which are still ironically all funded from the same post-Qaddafi Libyan government coffers, and have essentially torn the oil-rich North African nation to shreds.

After almost eight years of press releases, declarations, conferences, failed UN efforts to end the civil war, and a fruitless Paris agreement in May, on November 12 and 13 in Palermo, Sicily, the Italian government held another summit on Libya. All major governments—in Europe, the Arab world, Africa, the United States, and Russia—were invited, as were some of the different factions fighting for power and oil money in Libya itself. However, many of the marginalized groups, including the supporters of the late Muammar Qaddafi, were absent and therefore will remain spoilers in the shadows along the same line of the famous comment of former US President Linden Johnson on the need of including all sides in the political tent. In effect, the Italy meetings, like many others before it, is just another plan to divide power among certain groups. They are not actually meant to reach a serious and long term political settlement that can heal the still-open wounds of the country or achieve a national reconciliation.

In the run-up to the conference, some European experts and Libyan factions called for greater US involvement to force a solution to the Libyan crisis. These voices generally make two main arguments. The first is that the United States is the only country that can help solve the Libyan chaos by forcing European and Arab countries to stop interfering and support the UN plan for Libya. The second revolves around why US intervention is necessary. The reasons are mainly oil, regional stability, and the US’s moral obligation, given the Obama–Clinton administration’s ill-conceived decision to intervene in the collapse of the Qaddafi regime in 2011. No long-term strategy was set in place then by the United States, which resulted in the mess we see today; the rise of radicalism in Libya and North Africa in general.

Additionally, the assumption that the United States is the only country that can bring all parties in agreement is not a logical argument, unless we want to apply such flawed thinking to every crisis in the world. Such logic does not also consider the fact that in the past when the United States sent its troops, it spent considerable political capital and committed billions of dollars to places such as Afghanistan, Iraq, Somalia, and still failed to achieve much beyond increasing radicalism in the region.

The argument that Libya represents an important geopolitical concern for the United States because of its location and oil—and as a pathway for hundreds of thousands of undocumented immigrants to cross the Mediterranean into Europe—lacks evidence. Libya’s location is certainly not unique, as all other North African countries share this geography. Libya’s oil, which is still struggling to return to pre-2011 levels, represents a very small fraction of the global supply, and the United States imports very little of it anyway. These issues are mainly of significance to Europe. It is therefore a problem that needs a European and African solution, not an American one.

Finally, Libya’s only real and direct relevance to US interests is minor: it is one of many places in the world that have pockets of radical Islamists. Therefore, it should be included in the global war on terrorism, but not as a major hotspot; and only in limited and targeted ways.

The absence of any real arguments in favor of US involvement is an argument itself for the United States to stay out of Libya’s zero-sum civil war. Instead of being embroiled in another conflict, Washington could focus its efforts on supporting the UN peace process. The UN is the logical place to lead an international effort to bringing peace in Libya that can take into consideration Libya’s realities, the interests of its neighbors, as well as those of the international community.

The UN has also put forward a viable plan for holding a national conference in early 2019 of all Libyan sides, including forces and tribes still loyal to the former regime. This conference could hopefully produce some kind of consensus that can serve as the basis for a constitutional framework, followed by national elections, to hopefully produce political institutions that can actually reflect the minimum levels of legitimacy. Standing behind the UN efforts will also afford Washington the appropriate balance between keeping a foot in Libya and enough distance and minimum involvement in another civil war with too many unsavory and unreliable characters.

Hafed Al-Ghwell is a non-resident senior fellow with the Foreign Policy Institute at the John Hopkins University School of Advance International Studies and a former adviser to the Dean of the board of the World Bank Group. Follow him on Twitter: @HafedAlGhwell

Read more on this topic from our resident senior fellow Karim Mezran and Erin A. Neale, as well as Nicola Pedde:
Libya, the US, and the Palermo Conference
The Unknowns of the Libya Stabilization Conference