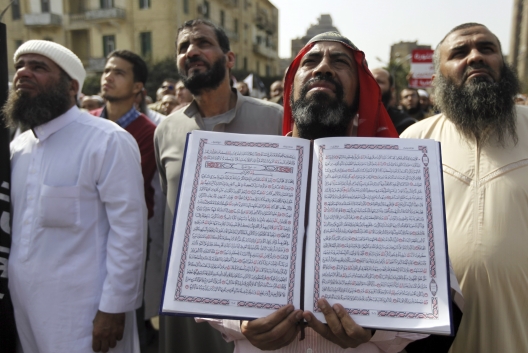 What initially started out as a call to protest that not many took notice of, the Salafi Front’s plans for mass protests on November 28, has slowly attracted more attention. This is in some part due to official warnings and vows of forceful confrontations, and is fueling concerns about violence on Egypt’s streets on Friday.

Much about this ultraconservative group, whose call to protest comes under the banner of the Uprising of the Muslim Youth, leaves room for speculation about the expected turnout on November 28. This is its first test as a mass mobilizer, and has been targeting the non-politicized Islamist base and those who have been operating with no political or religious leadership for over a year.

The first statement issued by the group on November 1 included a vague reference to violence, which the Front was quick to explain the following day. “As the Salafi Front, we are committed to peacefulness, despite the inclusion of different sectors of our Egyptian Muslim brothers in the Uprising,” it said in an emailed statement, failing to clarify, as intended, the intentions of the other sectors it referred to, or who they are. The media picked up the violence referenceand labeled the call as incitement. The Minister of Religious Endowment said the call for protest was “malicious” and tantamount to treason. Interior ministry officials gave conflicting advice: suggesting people stay home, as well as carry on with bussing as usual. The ministry has also vowed to confront assaults on public facilities with force. Over the past two weeks, police arrested several of the movement’s leaders, in what the Front has described as nighttime raids on their homes. All of this has lent weight to a call to protest that might have otherwise been ignored, as is the case with weekly protests staged by supporters of ousted Muslim Brotherhood President Mohamed Morsi.

On the Front’ social media accounts, some users ridicule their vow of peacefulness, seeing violence as the apt response to the deadly crackdowns, arrests, and torture they’ve experienced. These views reflect repeated concerns by various Islamist leaders that organized violence has become appealing to younger segments that see no other recourse. Violence in this context is better defined as IEDs and targeted attacks, rather than confrontations with the police, which many see as justified self-defense. In their view, the rapid expansion of the Islamic State of Iraq and al-Sham (ISIS) likely provide an alluring example that violence, not democracy, works. Yet, with the exception of one Sinai-based terrorist organization that pledged allegiance to ISIS, its strategies do not appear to have been adopted in Egypt, whether by Islamists or the small, unknown groups responsible for the near-daily IED attacks.

The Salafi Front dismisses these calls, as well as the subsequent accusations. Its young spokesman Mohamad Glal told al-Sharq TV station that it is futile trying to prove otherwise, since the media already considers Salafis, the Muslim Brotherhood, and ISIS, to be one and the same.

It seems the one group the Front wants to separate itself from the most is the Brotherhood. As part of the pro-Morsi National Alliance to Support Legitimacy (NASL), the Salafi Front was diluted within the agenda and street presence of the stronger and leading partner: the Muslim Brotherhood. Its call for protests on November 28 asserts its individual presence and Salafi identity, which could redefine its role within the Alliance or signal the foundation of a new entity

“The Brotherhood and the Alliance’s protests couldn’t reach out to the people. Through the Uprising of the Muslim Youth we were able to establish a strong popular movement … that could undoubtedly make change if it moved together,” Glal told EgyptSource.

The Muslim Brotherhood only issued a statement of vague and scant support, but not a direct declaration of participation, days after the arrest of Mohamed Ali Bishr, a former minister under Morsi and one of the few Brotherhood leaders who had not been detained or living in exile. Like other Salafi Front leaders arrested this month, Bishr was accused of a raft of charges, including inciting violence. Another major player within the NASL, the Building and Development Party, the political arm of the Jama’a al-Islamyia group that renounced the violence it was famous for in the 90s, said it doesn’t support the Front, criticizing its intentional disregard for “consensus.”

The other major Salafi player, the Salafi Call and its political arm, the Nour Party, have condemned the call for protests. They, however, are not party to the Islamist alliance that opposes the current government. Their clerics supported Morsi’s 2013 ouster, a move that cost the group much of its street credit especially after the deadly crackdown on the Pro-Morsi sit-ins in August 2013 in which an unspecified number of Salafis were among those killed.

Glal says youth from different groups will be joining even if their leadership doesn’t agree. In addition to its Islamist identity, the Front banks on its history of joining the 2011/12 protests, claiming it was at the forefront of all revolutionary battles, especially at times when conservative clerics toed the state line and advised against participation.

Through a revolutionary and Islamist discourse, the group is trying to engage and gather a fragmented base, and in the process, fill a religious and political leadership void. It’s capitalizing on social and economic discontent along with opposition to the military coup, embedded in simplified Islamist goals. Its first action on Friday is calling for supporters to go the mosque for dawn prayers en masse without protesting. It strives to distinguish itself by calling on its protesters hold the Qur’an—a move condemned by Al-Azhar.

This Islamist discourse, however, has also served to alienate the group. The call for the “Muslim Uprising” roots itself in this base with a clear barrier against the participation of other non-Islamist movements. “Islamic identity” sits atop three goals, followed by the rejection of both foreign hegemony and the military coup. Seeking consensus, however, is repeatedly ridiculed by protest leaders, who do not see this alienation as a drawback. “We’ve been protesting together since January 25. We used to participate and relinquish ideas and goals and set transitional goals instead for the sake of patriotic comrades and stability,” Glal said. “But unfortunately, liberal, socialist and secular factions always asserted their demands and didn’t offer any concessions for the sake of national interest. We and other Islamists die in thousands in the streets. Tens of thousands are arrested. We are shouldering this entire phase and none of them joined us. Why then don’t I express myself, and my demands and goals clearly?”

The challenge remains to reach out to these masses, communicate these goals and maintain control of the protest action. First, there are no estimate of the size of this base. The Nour Party’s electoral alliance in the 2011/2012 parliamentary elections has the most successful record in drawing millions of votes for Salafi politicians, but since then the allure of the first unified Salafi political group has faded and is unlikely to be replicated. In fact, it is not accurate to say the millions that voted in favor of that alliance are all Salafis. There is no current estimate of the size of this base, nor of its propensity to participate in street action.

While the Nour Party was working on elections, the Front was focused on the streets and managed to organize a number of Islamist-based protests in 2011. November 28 is its biggest endeavor to date and comes at much more restrictive conditions incomparable to 2011.

A hurdle the Front has to pass before Friday is to once again make street action appealing. Demonstrations marking the first anniversary of the deadly crackdown on pro-Morsi sit-ins, the memory of which unites many Islamist factions, failed to galvanize support in August, signaling the decline in protests as a form of dissent. This cost the NASL, with two parties consequently leaving the alliance as members disagreed over what some saw as futile and stagnant strategy dependent on ineffective street protests.

This same sentiment was reflected in criticism the “Uprising” got from its targeted participants on social media. “What’s the other alternative?” Glal said. “November 28 is not merely a wave of protest. It’s a complete revolutionary wave with many phases that will start on November 28.”

It all hinges on what happens on that day. The concerns from the government and other parties are tied to the unpredictability and uncertainty of what the November 28 protests, and its supporters, will bring.

Sarah El Sirgany is a nonresident fellow at the Rafik Hariri Center for the Middle East. She is a Cairo-based journalist and television producer, contributing to regional and international publications and networks including CNN, the New York Times, Al-Monitor and Mada Masr.