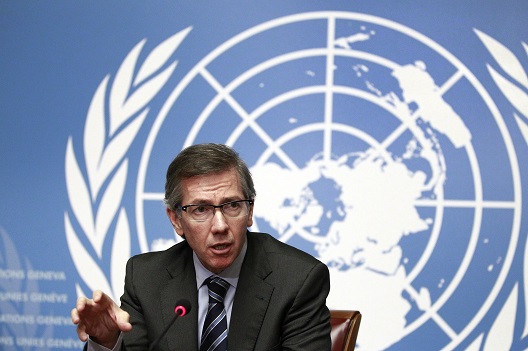 Since UN Secretary General Ban Ki-moon nominated Mr. Bernardino Leon as the UN Special Representative and Head of the UN Support Mission in Libya (UNSMIL) in August 2014, stagnant Libyan waters have moved. When he announced the launch of a political dialogue in September 2014, Libyans who lost confidence in the political process—having witnessed a tremendous deterioration in their security and quality of life—distrusted the initiative, doubting that such a dialogue could be realized. Since that time, Leon has worked diligently to build a Libyan constituency among its rival powerbrokers to reach agreement over Libya’s future. While this effort has culminated in a draft proposal to end Libya’s political crisis, the terms of the draft agreement thus far place far too great a burden on any future Libyan government without clearly defining the obligations of the United Nations or international community towards its implementation.

Table 1. Timetable of the UN-brokered Libya talks and outcomes

UNSMIL’s hopes to create a national unity government through the political dialogue, vested with the power that would allow it to govern free of parliamentary manipulation. UN and international community members would then provide assistance to surmount Libya’s most urgent challenges—including security, militias groups, arms proliferation, and managing the remaining transitional period. The third round of talks in Skhirat represented a breakthrough, when UNSMIL provided a complete draft agreement on “The Political Transition in Libya” for all parties to the political dialogue to consider in the coming days. This is the first complete draft agreement issued by UNSMIL since the Libyan political dialogue began in September last year.

By insisting upon international support in Chapter V of the draft agreement, UNSMIL acknowledges that Libya cannot implement the security arrangements mentioned alone. The proposal’s repeated reference to both the UN and the international community in specific acts, such as “execution of the temporary security arrangements,” “ceasefire observation committee,” “executing the cease fire agreement and security safeguards,” and “collection of all heavy weaponry and its ammunition,” aims to garner the support of the global community to help set the stage for a sustainable political solution. The importance of this chapter is obvious; without a secure Libya, political forces cannot address any of the core issues. The proposal would remain ink on paper unless the UN and the international community can effectively support the implementation of Chapter V.

The phrasing in the above-mentioned articles, however, does not constitute in any way an obligation to secure Libya. The term “international community” is a fluid expression that has different meanings: a group of people or governments, the United States and its allies, or individual UN member states could all fit the definition. But without being able to point to someone, it points to no one at all. Unless the draft agreement names states that have been involved in the dialogue process since its beginning—such as the United Kingdom, the United States, Italy, France, Spain, and/or regional organizations such as the European Union, Arab league, NATO—the terms used in the draft agreement engage no one. Although the agreement affords the unity government the right to call for assistance from the global community, there is nothing new afforded in this right; it is a right of all governments to request assistance in times of war or peace. The issue here is whether anyone would respond to the unity government’s requests.

Bearing in mind the numerous UNSC resolutions relating to Libya, it would make more sense to redraft this chapter taking into consideration all international obligations outlined in these resolutions towards Libya, including EU decisions and declarations. This additional step would obligate UN, Arab, European, African, and American parties to define the international engagement towards Libya, one to which they would be bound and agree to honor.

As the UN and foreign nations engaged in the political dialogue have realized, Libyans who needed help in eradicating a dictator in 2011 still need help today with peace building. Uncontrolled arms, arsenals, and their proliferation are destroying the democratization process in its formative stages. Today, no democracy would succeed in Libya in the presence of militias. Chapter V related to security arrangements in the UNSMIL draft agreement puts its finger on the crux of a successful transition. However, the unity government–given its tasks in accordance with the draft agreement–could never implement the obligations without the full engagement of the UN and other concerned states. While Libya’s stakeholders would determine the scope and success of a final agreement, only a clear and binding international support mechanism can maximize the chances for fulfilling the promise of a Libyan Spring and give the phrase “international community” some meaning.

Image: Special Representative of the Secretary-General for Libya and Head of United Nations Support Mission in Libya (UNSMIL) Bernardino Leon addresses a news conference at the Palais des Nations in Geneva, January 14, 2015. (Reuters)