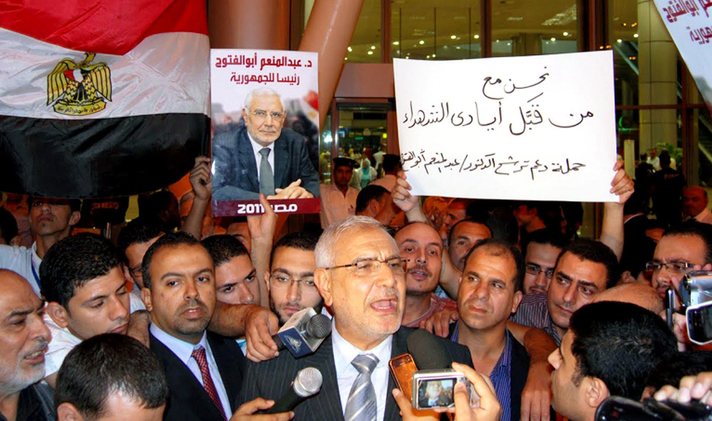 Observers of Egypt’s upcoming presidential election are quickly tuning into rumors of unwritten deals among various players in the political game.  This behind-the-scenes bargaining is driving two key trends: 1) the fact that most presidential candidates are not affiliated with the leading political parties; and 2) consensus among Islamist forces against backing an Islamist candidate. There is also a growing conviction that the candidate with the best chance of winning the presidency is already being teed up in back-door negotiations with the Supreme Council of the Armed Forces (SCAF).

These bargains are the result of mutual understandings between various political forces. The Islamists, satisfied by their victory in the parliamentary elections – which will enable them to dominate the constitution-writing process and maintain their control over society – would prefer to share political power with a civilian president while wielding a parliamentary majority. What is surprising and suspicious in this context is the failure of secular parties to put forward their own candidates in the competition, seemingly content to back independents.

None of the major front-runners – including Mansour Hassan, Amr Moussa, and Abdel Moneim Aboul Fotouh – are affiliated with parties, and their campaigns are fueled by their personal efforts. Their lack of institutional backing will put them in a weak bargaining position vis-à-vis the state in the event of victory, and will make them vulnerable to pressure from the hegemonic military apparatus and the Muslim Brotherhood.

The competition and negotiations between presidential candidates will revolve not around their electoral platforms, but around their affiliation with parties.  The two main forces facing off in the election will be representatives of the revolution and those of the ruling regime, which is striviling to preserve a balance of power on the domestic and regional level that has remained virtually unchanged since the Mubarak era. The presidential candidates with revolutionary tendencies represent a threat to the political status quo because they are seeking to effect fundamental changes in Egypt’s political infrastructure and regional dynamics.

Although a number of candidates claim to represent the revolutionary forces, no single liberal candidate has emerged on the scene since Mohamed ElBaradei’s withdrawal from the race, accusing the SCAF of governing as if the former regime had never fallen, and saying he could not trust the military to administer free and fair elections. So far, no candidate has been able to build consensus among revolutionary movements, and none of them are as radical in their demands for change as ElBaradei.

The leading candidates have overwhelmingly ideological platforms, including the three leading Islamists: Abdel Moneim Aboul Fotouh (who split from the Muslim Brotherhood after the revolution and represents the group’s moderate wing), the Salafi candidate Hazem Saleh Abou Ismail, and the Islamist thinker Mohamed Selim al-Awaa, whose past statements of support for the SCAF have tarnished his credibility. The so-called “civil” political candidates are led by the Nasserist Hamdeen Sabahi, Hisham Bastawisi (a liberal, pro-reform judge with socialist tendencies), and the activist lawyer Khaled Ali, also on the leftist end of the political spectrum.

Meanwhile, the candidates associated with the current regime – head of the Advisory Council Mansour Hassan, Arab League Secretary General Amr Moussa, and Mubarak-era Prime Minister Ahmed Shafiq – do not represent particular ideological currents, but rather, appear to be extensions of the political status quo.

The Muslim Brotherhood’s Freedom and Justice Party, will find it difficult to settle on a candidate to support, in light of the group’s previous pledge to refrain from backing an Islamist. The FJP has postponed deciding on a nominee until after the close of the nomination period, only fueling speculation about its choice.  Aboudl Moneim Aboul Fotouh is still popular within the Brotherhood’s ranks, while anonymous leaks have suggested that the group is leaning toward endorsing Mansour Hassan, viewed by many as a “consensus candidate” who enjoys the support of the military. Still others suggest that the Brotherhood is trying to convince Hossam Ghoriani, head of the Supreme Judiciary Council – one of the symbols judicial independence under Mubarak with known Islamist tendencies – to run for the presidency.

Revolutionary forces have little hope of fielding a successful presidential candidate unless they join forces and coordinate. There is talk of rival “civil” candidates trying to buy each other out by promising deputy positions in exchange for withdrawal from the race. Some have suggested that Abdel Moneim Aboul Fotouh may try to co-opt his competitors by offering vice presidential appointments to Hamdeen Sabahi and Hisham Bastawisi, but the lack of cooperation will make such an arrangement difficult to implement.

Bargaining among presidential candidates is playing out against the backdrop of negotiations over the next constitution. The Freedom and Justice Party is leading the controversial and polarizing process of defining procedures for the selection of a 100-member constituent assembly to draft the new charter. There are reports that the FJP has reached a deal with Christian leaders to preserve the existing language of Article 2 – which defines Sharia as the principal source of legislation – in exchange for appending an additional clause granting “non-Muslims the right to refer to their own religious laws.” This deal will only strengthen the hand of religious institutions in Egypt’s political system, and could infringe on the rights of minorities, particularly in light of the Salafi Nour Party’s significant representation in parliament. Unlike the Muslim Brotherhood, the Salafis have rejected proposals to preserve the current formulation of Article 2, and may seek to strengthen the role of religion in public life. But Egypt’s future legal framework will depend to a large extent on how the next president will implement and interpret the constitution, and the current negotiations between candidates and parties could determine will likely determine who wins the keys to the executive branch.

Read this article in Arabic