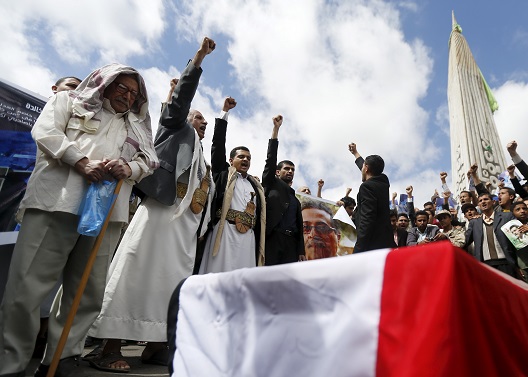 Yemeni media is one of the most affected aspects in the raging war in Yemen. In an unprecedented case, a Houthi-controlled court issued a death sentence earlier in April, against journalist Yahya al-Joubayhy, for being a “Saudi spy,” reflecting a glimpse of the risks Yemeni media workers endure.

The war in Yemen has negatively impacted media in multiple-levels. In 2016, in a televised speech, the leader of Houthi rebels, Abdelmalek al-Houthi, warned “The media workers are more dangerous to our country than the nationalist and warring mercenaries,” shows the hostility of militant groups toward the media. This hostility hinders the media’s ability to deliver news and stories about Yemen’s war, leaving Yemeni news audiences ignorant, dependent on military groups’ own media, and easy prey to war propaganda.

War on the Media

Yemen’s media has suffered a decline and retreated as it comes under increased pressure during the ongoing conflict. According to Yemen’s National Information Center, before the Houthis’ takeover of Yemen’s capital city Sanaa in September 2014, Yemen used to enjoy about 295 publications, four official state-owned TV channels, and fourteen privately-owned TV channels. Despite this media landscape, Freedom House ranked Yemen’s freedom of the press status amongst the worst in the world, and it has since declined.

Controlling the local and international narrative is crucial for the Houthis. When Houthi forces took over Sanaa in 2014, they shelled the Yemen state TV station, and soon after they replaced media professionals with Houthi-affiliated media groups. While this was happening in Houthi-controlled areas, newspapers and broadcasts in the north and south were suspended, such as the formerly state-owned Althawra and 14October newspapers. Instead, the Houthi’s captured Althawra and turned it into a pro-Houthi outlet circulated only in the north, and 14October had a similar experience under the southern coalition. In Houthi-controlled areas, there has been a crackdown on media groups, the Yemeni internet service provider, Yemennet, which has blocked certain anti-Houthi websites, and the Houthi-controlled Ministry of Information accused media outlets of “inciting treason.” Controlling the media became even more prevalent in 2015 after the Saudis started their air campaign.

Today, in Houthi-controlled areas, there are ten Houthi-owned print publications, two Houthi-owned TV channels and one TV channel owned by former president Ali Abdullah Saleh. In the south, a handful of TV channels and newspapers are currently working, the most notable are owned separately by Yemeni President Abd Rabbo Mansour Hadi and General Ali Mohsen al-Ahmar. There are also three independent media groups.

The deadliest violation against press in Yemen was the death of two Yemeni journalists who reportedly were used as human shields by Houthi forces to protect a military installation. In another instance, blogger and investigative journalist Mohammed al-Absi, known for reporting on a number of Houthi-related-corruption stories, was poisoned. While many believe Houthis are responsible, the investigation is still undergoing. The large scale abuses against press in Yemen has not only made Yemen one of the most dangerous places to work as a journalist, but also has ranked the Houthis as the second worst abuser of press freedom in the world—only the Islamic State (ISIS, ISIL, Daesh) surpasses them.

Meanwhile, Hadi and his government have begun focusing on using social media as the sole tool for dissemination of information starting from the day he escaped Sanaa to Aden in February 2015. Hadi was able to escape with the help of former Information Minister Nadia al-Saqqaf, who was tweeting about his alleged ‘critical health’ under Houthi imposed siege. Other Yemeni officials are also ordered to join and be active on Twitter, according to a Yemeni official who prefers to remain anonymous for security reasons. Hadi’s leadership has given more focus on using the internet as means to disseminate information in a country where only a quarter of its population has access to the internet, which is mainly the elite. The exiled government seems more concerned about addressing the international community than Yemenis.

As a result of the hindered and biased media landscape, both the international community and more particularly the Yemeni public receive a distorted picture of the Yemen war. This turmoil in the media landscape has undermined any relatively comprehensive media representation of the Yemen war. Each side of the media coverage focuses on its opponent’s atrocities, deliberately overlooking its own wrongdoings, to cast the other as the only perpetrator. More importantly, each side of the media may not necessarily instigate sectarianism, but it does instigates regionalism, antagonism, and violence by humanizing one side and dehumanizing the other. For instance, each side depicts the other as mercenaries for the Saudis or the Iranians, respectively, and depicts their dead as the only ones worthy of being called victims.

The polarized media outlets also characterize the beginning of the war differently. For pro-Houthi and Saleh media, it began when the Saudi-led coalition began its campaign, while for pro-exiled government media outlets, there is an emphasis on the Houthis’ coup d’etat. For Yemenis, it is impossible to get a full picture of the conflict. In the north, people not politically affiliated tend to gradually become Houthi supporters as most media outlets are affiliated with the Houthis, and vice versa in the south. As each  understanding of the conflict becomes more biased, it becomes harder to reach national and local level reconciliation deals.

The international media, and specifically Arab media, coverage suffers from a different set of problems. A quick look at major news organizations shows a lack of coverage of Yemen in comparison to other global events, and rarely features Yemen articles in the headlines. There are three main reasons for this: first, Houthi forces either forcibly disappear or put behind bars non-propagandist Yemeni journalists; second, Saudi Arabia is buying media silence along with hiring PR companies to polish its image in media; and lastly, independent foreign journalists do not have access to the country.

Yemenis who are critical of both local coverage and international media find themselves disappointed and frustrated. Incomplete information coupled with frustration is something that armed groups, including the belligerent parties and extremist groups such as ISIS, prey on to attract recruits.

Most Yemeni journalists interviewed for this article expressed that they had no work because they had been forced to move back to their villages to escape the Houthi crackdown. One journalist pointed out that, “polarization in Yemeni media has never been this high. The problem is that there is no room for a middle ground. On one hand, Houthis allow press only if it is biased in favor of them, as does the Yemeni exiled-government. All that you have in Yemen now is propaganda and each side can support you, only if you abide by their propaganda.”