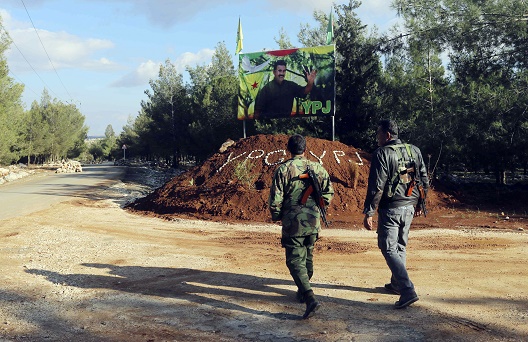 In mid-July 2012, the Syrian government withdrew its forces from a large amount of territory along the Turkish border. This move allowed the Democratic Union Party (PYD), a Kurdish nationalist group linked to the Kurdistan Workers’ Party (PKK)—a US- and Turkish-designated terrorist group—to take administrative and military control over the self-declared cantons of Efrin, Kobani and Jazira, collectively named Rojava. The link between the PYD and PKK challenges Turkey’s interests in Syria and, by its own estimate, its national security.

To support the PYD’s political and military efforts in Syria, Kurds from Turkey, Iran, and Iraq have travelled to Syria to join with the People’s Protection Units (YPG), the PYD’s militia. The growing sense of cross-border pan-Kurdish nationalism has contributed to the resurgence in violence in Turkey’s southeast, following the break-down of peace talks in mid-July 2015 between the Turkish government and the PKK. In an interview with the International Crisis Group, an unidentified PKK member underscored the importance of Rojava, describing the war in northern Syria as a historic opportunity to implement its program of “democratic self-administration,” a system of governance based on imprisoned PKK leader Abdullah Öcalan’s teachings.

Between 2013 and late 2014, the Turkish government tolerated the cross-border movement of Kurds and a small number of radical leftist Turks. Ankara acted out of deference to the then ongoing peace talks with Öcalan and welcomed the large exodus of PKK-allied Kurds for strategic reasons. The government considered the YPG-ISIS war a net positive, given that two entities hostile to Turkey were killing one another.

During this time period, Turkish security forces refrained from conducting military operations in Kurdish-majority areas and the presence of PKK fighters was tolerated in urban areas. A key turning point, however, came in September 2014, when the Islamic State (ISIS or ISIL) besieged the town of Kobani. In response, the Turkish military sealed the porous Turkey-Syria border that Kurds had been using to fight and trade with their counterparts in Rojava.

Despite the tightened border, Kurds from Turkey remain well represented in the YPG, further underscoring the group’s links to the PKK. In an interview with the Wall Street Journal, Kurdish fighter Zind Ruken expanded on the PKK-YPG relationship. “Sometimes I’m a PKK, sometimes I’m a PJAK [the PKK-allied affiliate, active in Iran], sometimes I’m a YPG. It doesn’t really matter. They are all members of the PKK.”

The YPG’s casualty data confirms linkages between international PKK-linked groups. Kurds from Turkey total 49.24 percent of the YPG’s self-reported casualties between January 2013 and January 2016, according to an ongoing Atlantic Council study. YPG martyrdom notices show that 359 Turkish citizens, 323 Syrians, 32 Iranians, seven Iraqis, two Australians, two Azeris, and a person from England, Germany, Greece, and the United States each have been killed fighting with the group since January 2013. To be sure, there are methodological problems with the data: The two authors relied on self-reported numbers and have not been able to cross-reference this information with the PYD.

Nonetheless, the casualty data closely reflects known YPG offensives, including the 2014 clashes around Ras al-Ain with the Nusra Front, the battle for Kobani in September 2014, and the 2015 YPG-led offensive towards the Euphrates river and Ain Issa, a town near ISIS’s de facto capital of Raqqa. According to the data, the battle for Kobani accounted for 38.95 percent of overall casualties and 44.4 percent of the Turkish Kurds killed with the YPG between 2013 and 2016.

During the battle for Kobani, the US-led anti-ISIS coalition worked closely with the YPG to direct airstrikes. Since then, the coalition has retained its close links with the group, deploying up to 50 special operations forces inside PYD-controlled territory and reportedly staffing an airfield inside Syria to ferry supplies to Kurdish-controlled territory. Backed by coalition airstrikes, the YPG has made considerable advances against ISIS and now controls 265 miles of territory along the Turkish-Syrian border.

The Turkish government views this collaboration with suspicion, owing to the YPG’s relationship with the PKK. Officially, Turkey makes no distinction between the YPG and the PKK. However, Ankara’s actions suggest that the government tolerates the US-YPG partnership. US aircraft based at Turkey’s İncirlik Air Force Base fly strike missions in support of the YPG in Syria just as the Turkish Air Force bombs PKK targets in northern Iraq and southeastern Turkey.

While the US-YPG partnership has put considerable pressure on ISIS, the PYD’s political ambitions inside Syria (matching closely with those of the PKK) pose a longer term threat to Turkish security. This threat has grown more immediate in recent months, following the collapse of a two-year-old ceasefire in July between the PKK and the Turkish government.

According to the International Crisis Group, between July and mid-December 2015, “Violence claimed the lives of 194 security officials, at least 221 PKK insurgents and as many as 151 civilians.” Much of the fighting has taken place in urban areas between the PKK’s youth group, the YDG-H, and Turkish security forces. In recent weeks, the YDG-H has rebranded itself as the YPS (Civil Defense Units), which now flies a flag identical in design to that of the YPG, albeit with different colors.

For now, the PYD remains focused on its political project inside Syria, which requires a YPG-Turkey ceasefire. Open hostility risks opening another front against the Turkish military while its forces are deployed against ISIS. PYD successes in Syria, however, have influenced the PKK’s overarching ambitions in Turkey and, in turn, the Turkish government’s assessment of the threat they pose.

The PKK’s involvement in two overlapping fronts shape this assessment. The first front remains inside Turkey against Turkish security forces for what the Democratic Society Congress (a PKK-linked Kurdish group inside Turkey) recently called the formation of autonomous regions based on cultural, economic, and geographic ties. The second hinges on support for the PYD’s project inside Syria via the YPG. This investment and possible PKK-YPG cooperation suggests similar political ambitions in Turkey and Syria, and is disturbing to the Turkish government.

How the relationship between the Turkish state and the PKK develops largely depends on how the PKK approaches—and defines—autonomous governance in Turkey. Before the collapse of the peace process, leaks about the state of the peace talks suggested that Öcalan appeared willing to support a proposal backed by Turkey’s ruling Justice and Development Party’s (AKP) to transition to a presidential system in exchange for some semblance of democratic autonomy. The move would have helped resolve the issue peacefully by addressing key Kurdish demands (beyond those espoused by the PKK) for greater political and cultural autonomy. The AKP supported the premise of this potential compromise, although many details needed to be worked out before implementation.

For now, the return to violence and growing Kurdish antipathy towards the AKP rules this out. The PKK’s military leadership and the leaders of Turkey’s Kurdish-majority Democratic Peoples’ Party (HDP) remain hostile to the further empowerment of Turkish President Recep Tayyip Erdoğan, who many Kurds blame for the rise of ISIS. Öcalan has not been allowed to speak with the outside world, either through his lawyers or the HDP, since April.

The PKK leadership in Kandil refuses to return to peace talks unless the Turkish government addresses the group’s demand for “democratic autonomy.” Today, the PYD continues to pursue this vision in Syria, pushing to unite the Kobani and Jazira cantons with Efrin (a disconnected piece of Kurdish-administered territory opposite Turkey’s Hatay region).

The Atlantic Council’s casualty data shows a clear shift in casualties in late 2015 towards the western front near the Tishreen Dam, compared to a few months earlier, when YPG fighters were dying near Ain Issa. The trend suggests that the YPG intends to expand its territory east of Efrin and west of the Euphrates—directly challenging Turkish interests in northern Syria, but in line with the group’s longer-term ambitions in northern Syria.

The synergies between the PKK and PYD’s overarching political goals pose a longer-term problem for Turkish interests in Syria. The violence in Turkey’s southeast contributes to these problems and hastens unilateral declarations of autonomy in Kurdish districts and towns inside Turkey. The United States is now involved in this unfolding conflict through its support for the YPG. Absent a return to Turkish-PKK peace talks that address the autonomy question, these dynamics point to continued violence and, more broadly, considerable friction between the United States and Turkey over the PYD and PKK’s longer term political endgame.

Image: Kurdish People's Protection Units (YPG) members walk at a checkpoint near the Syrian Kurdish town of Efrin, November 27, 2014. A picture of Abdullah Ocalan, jailed leader of the Kurdistan Workers' Party (PKK), is seen in the background. (Reuters)