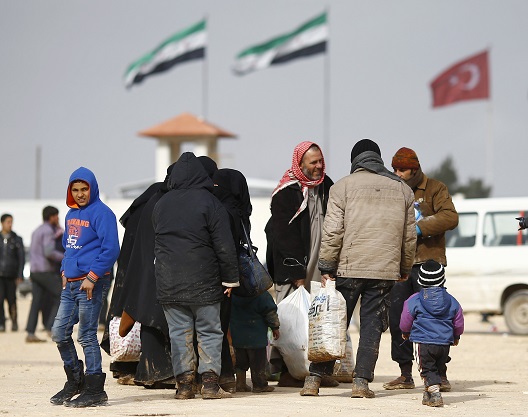 The Kurdish-majority Democratic Union Party (PYD), its militia the YPG, and an allied Arab-majority rebel group called Jaysh al-Thuwar have swiftly expanded the territory they control in the Azaz corridor in northern Aleppo. In recent days, the YPG led force have taken control of the Menagh Airbase, Tel Rifaat, and reportedly is in the final stages of negotiations for control over Marea. The YPG has relied heavily on Russian airstrikes in the area, which allows the group to place considerable pressure on anti-Assad opposition groups in Marea. At the time of writing, the YPG have not yet entered the city, but all indications suggest that they will force the Arab groups to leave or begin a military offensive to take the town by force. If a fight for the town does take place, the Russian Air Force may begin to strike positions inside the city.

One could expect the PYD to incorporate these towns into its political project and move to establish local councils inside these areas. The PYD also insists on providing security in areas under its control, which means the YPG and Jaysh al-Thuwar would act as local security forces. With the Arabs having little actual power, the PYD/YPG would dominate—a situation that Arab groups reject. However, absent any major changes, the YPG is poised to take control over much of the Azaz corridor and is now—with Russian support—dictating the war in northern Syria.

Once the YPG takes control of Marea, the group could choose to turn north and try to take Azaz, a town the Turkish government has pledged to defend. The YPG has already taken control over villages on the western outskirts of the town and could launch anoffensive to for the city. Turkey has pledged to defend these groups, which consist of the Northern Storm Brigade, a smattering of Faylaq al-Sham fighters that Turkey reportedly moved from Idlib to Azaz overnight, and embedded small number of Nusra Front elements.

The United States has an incentive to prevent a Kurdish offensive in the area, or risk more forceful Turkish intervention. Any such escalation could provoke a Russian response, which could have global implications, owing to Turkey’s NATO member status. Ankara has delineated Azaz a “red line” that they will defend, so long as the YPG puts pressure on the city. However, Russia’s presence in the area all but rules out a Turkish ground operation or airstrikes, leaving Turkey to rely on artillery to hold back the YPG offensive.

Ankara hopes to halt the fighting in the area, either through negotiating a sustainable ceasefire or through the enforcement of a safe zone, likely extending from Bab al-Salama/Öncüpınar to Azaz.

The YPG’s probable takeover of Marea raises a set of vexing political problems for the United States. With Turkish support, the United States has provided air support for a variety of rebel groups defending the so-called Marea line from the Islamic State (ISIS or ISIL). Many of the groups also receive military support from a joint Turkish-American operations room (MOM) in Reyhanlı. The United States also conducts airstrikes in the area against ISIS positions. This front line helps to defend the Azaz corridor—a critical Turkish supply line for the anti-Assad insurgency in Aleppo.

The Russian and regime offensive in the area has weakened the Marea line and indirectly empowered ISIS in the area. The YPG has also undercut the Arab defensive lines—a reality that Turkey points to as evidence of an indirect ISIS-YPG alliance to defeat the Arab majority anti-Assad opposition. However, should the YPG take firm control of Marea, the group will continue to put pressure in the so-called Manbij pocket, the ISIS-held area between Azaz and the Euphrates.

On the eastern side of the Euphrates, the United States has supported the YPG-led Syrian Democratic Forces’ (SDF) war against ISIS, including the capture of the Tishreen Dam. In doing so, the United States—working with Turkey—supported YPG-backed operations west of the Euphrates. Although Ankara supported this offensive, it made clear it was a tactical decision to reinforce the SDF front line with ISIS. Turkish support for this operation suggests support for a YPG-backed offensive for Raqqa, the de-facto capital of ISIS’ “caliphate.”

The YPG, however, has made clear that it will not march on Raqqa until it protects its eastern flank. Kurdish officials have indicated that they must first take Manbij before marching on Jarablus. This offensive, according to the YPG, will seal the Turkish border and prevent ISIS from reinforcing its ranks with foreign fighters. This argument is based on PYD’s ardent, if misguided, belief that the Turkish government supports ISIS

The United States has refused to give air support for such an offensive, largely out of deference to Turkey’s concerns about the PYD taking control over the southern border with Syria. The collapse of the Azaz corridor could allow for the United States to extend its air support for YPG units in Marea and those based at the Tishreen Dam. The YPG could then clear ISIS from the Manbij pocket, setting the stage for a battle for Raqqa. Elements of this plan already seem to be in place: the United Arab Emirates will reportedly place special operations forces near Raqqa to work with Arab tribes and militias to aid in the battle for the city. Such an operation requires YPG support.

Turkey could still move against any YPG-led offensive in Jarablus, where Russia does not have a heavy presence, surging its forces to the area to reinforce its red line. But in such a scenario, Ankara would be in the awkward positon of being on the side of ISIS, a group that Turkey has pledged to clear from its border. The Turkish government has few options at this moment, other than to continue to push the international community to enforce a safe zone as it increases military support to groups active in Idlib.

This chain of events would further undermine US-Turkish relations. The United States could use the YPG to clear the Manbij pocket, but in doing so, it would also help create a contiguous Kurdish-controlled Rojava. To assuage Turkish concerns, the United States could pressure the PYD to reach agreement with certain Arab groups in the area on local governing structures that act independently of the PYD’s central authorities in Qamishli. This would require the PYD to make concessions to Arab groups, beginning with the local revolutionary councils in Tal Rifaat and Marea. Such a move would require Turkish buy-in and a pledge from Ankara to continue to support these groups, even if they decide to cooperate with the PYD.

To date, there is no precedent for such cooperation. Indeed, the PYD’s political philosophy is diametrically opposed to the governing principles in anti-Assad opposition-controlled parts of northern Syrian. The current chain of events suggest continued tensions between Arabs and Kurds in the Azaz corridor and the risk of Turkish intervention against the YPG, despite being a US partner poised to besiege ISIS positions in the Manbij pocket and on the outskirts of Raqqa. This pattern suggests that the Syrian conflict has entered a new phase, unlikely to wind down any time soon. In the longer term, all signs point to the de-facto establishment of a contiguous Kurdish-controlled territory in northern Syria, which the United States will have had a hand in creating.

Image: nternally displaced Syrians wait near the Bab al-Salam crossing, across from Turkey's Kilis province, on the outskirts of the northern border town of Azaz, Syria February 6, 2016. (Reuters)