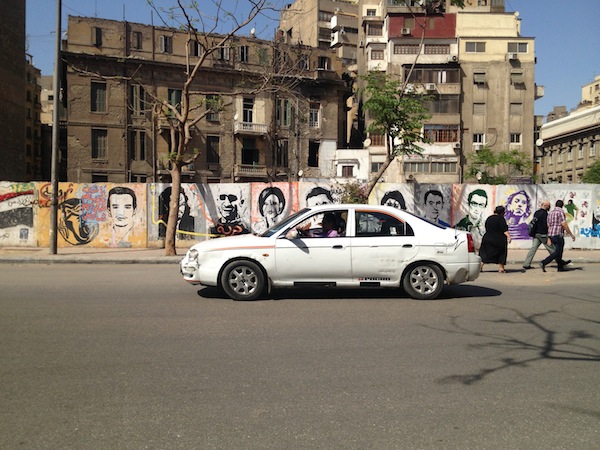 “We have a lot to cry about, but we choose to laugh instead. Everything just keeps getting worse. But we have to live anyway, so we joke.” – Fruit vendor Abd Al Moez Al Sawy

"This is an Islamic nation with an overwhelming Muslim majority … The minority doesn’t have absolute rights, it has relative rights." – Yasser Hamza, a Muslim Brotherhood official

Get Egypt off the Altar of Stability | Big Pharaoh, Fikra Forum

Highlighting Egyptian sentiment toward Washington’s perceived support for the Muslim Brotherhood government, characterized in particular by Gameela Ismail’s strongly worded statement during John Kerry’s visit to Egypt, Big Pharaoh makes one recommendation for the US:

“So what should the United States do? It must remove Egypt from the altar of stability. It is clear that the Brotherhood is adamant in doing only one thing: consolidate power to rule like Mubarak. However, this has not brought stability in the country ever since the Brotherhood reached power, and it will fail to do so in the future. Egypt has changed: Egyptians have broken the fear barrier and a new revolutionary generation has risen. They will not stand idle and watch the Brotherhood clone Mubarak’s regime to suit its own narrow political agenda. Political unrest will continue as long as the Brotherhood believes that democracy is solely based on winning an election.

Supporting regimes in exchange for temporary stability should be a concept removed from U.S. foreign policy. “

With more than 150 reported kidnappings in the past two years, in the midst of increased crime, Christians in Upper Egypt find themselves the targets of kidnappings for ransom:

“Crime has risen in general across Egypt, hitting Muslims as well. But the wave of kidnappings in Minya has specifically targeted Christians, and victims, church leaders and rights activists ultimately blame the atmosphere created by the rising power of hard-line Islamists.”

The kidnappings are another key example of a lack of trust in Egypt’s unreformed police force:

“Responding to the allegations that authorities do not aggressively investigate crimes against Christians, Minya’s security chief Ahmed Suleiman said it is because victims’ families negotiate with kidnappers rather than report the abductions.

"We cannot be held responsible for kidnappings that are not reported to us," he said, blaming hardened criminals for the kidnappings.

Christians say they don’t bother to report because they have no confidence in the police.”

Sally Roshdy warns that Egypt’s government and political elite have “forgotten the simplest principles of good governance: to deliver economic opportunities to their citizens.” She offers the following solution:

“New and well-planned initiatives must be created to improve Egypt’s economic and social conditions. These initiatives should involve all three sectors – the government,  private sector, and civil society.

Local civil society organizations can help create economic opportunities by building the necessary skills of those who are unemployed. For example, the Misr El Kheir Foundation aims to alleviate poverty and unemployment in various communities throughout Egypt by empowering youth and women with leadership and technical skills.

The private sector can also contribute to economic development in Egypt through providing inclusive business opportunities for more citizens, thus creating jobs,  attracting more investment to the country, and increasing production. Moreover, the government can engage with the private sector and civil society in setting  effective economic policies and ensuring inclusion of all actors to help grow Egypt’s economy.”

In the wake of over 33 arrests and charges relating to freedom of expression, Amnesty International has released the following statement:

“Some have been charged with what seem to be politically-motivated or trumped-up criminal charges. Others are charged with “insulting the President” or “defamation” of religion for actions that should not be criminalised as they merely amount to the peaceful exercise of freedom of expression.

Those targeted have included opposition activists, bloggers, and a high-profile opposition politician. Some have been targeted for supposed crimes that occurred months ago, or in one case more than a year ago. Most have been released on bail but will remain under investigation.

Amnesty International Middle East and North Africa Deputy Director Ann Harrison said: “We are seeing arrests and charges for literally nothing more than cracking a few jokes. This is a truly alarming sign of the government’s increasing intolerance of any criticism whatsoever. There is no sign of this campaign of judicial harassment coming to an end. The government is seriously redoubling its efforts to stamp out freedom of expression. The government is trying to destroy freedom of expression when it should be protecting the peaceful dissent and political participation that brought it into power.”

Comedian and satirist Bassem Youssef is currently facing several charges, among them insulting the president and religion. Released on bail, he revealed the details of his interrogation of CNN’s Christiane Amanpour.

On Saturday, one day after the latest episode of the show was aired, the Cairo Administrative Court dismissed a lawsuit calling for Youssef’s show to be suspended, and for satellite channel CBC’s license to be revoked.