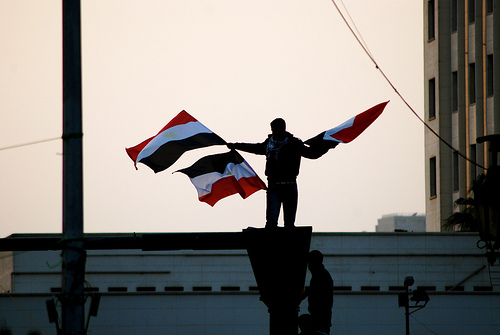 “My preferred option is for Morsi to come back and for a coalition government to be negotiated, 50-50, half from FJP and half from the opposition. And their mission is to organize the parliamentary election and if need be, after the results of the parliamentary election, a presidential election can take place. If that is not acceptable, then we’re really calling for a disaster in the country. Bring him back. The only way [to not] sabotage democracy is elections. This difficult time is teaching us all the need for compromise. I think we will be better compromisers than we used to.”

-Muslim Brotherhood and Freedom and Justice Party member and former member of parliament, Abdel Mawgoud Dardery, in an interview with Evan Hill.

Hanna clearly highlighted some key issues regarding the ongoing debate over whether Morsi’s ouster was a coup or revolutionary move.

“Despite inheriting intractable political, economic, and social problems, when Morsi ascended to power on June 30, 2012, he had choices—and he chose factional gain, zero-sum politics, and populist demagoguery.

While Morsi and the Muslim Brotherhood will undoubtedly now assume their more familiar role as victims, significantly aided by the brutality and stupidity of a repressive Egyptian security sector, the primary responsibility for Morsi’s ouster and Egypt’s perilous state resides with the deposed president and his Brothers. None of this was inevitable.”

Not everyone supports the view that Egypt’s recent events were not a coup. Khaled M. Abou El Fadl, a professor of law at the University of California, Los Angeles, argues that the intervention of the armed forces in the political scene is not good for the future of democracy in Egypt.

“The army is following in the footsteps of Gamal Abdel Nasser of Egypt, Hafez al-Assad of Syria, Saddam Hussein of Iraq, and Ayatollah Ruhollah Khomeini of Iran, who shared a common trait. They all pointed to their supporters in the streets as the source of their legitimacy and perpetuated autocratic rule in the name of the people’s will.

Secularists across the Middle East have traditionally failed at the ballot box because they lacked support among the pious masses and instead had to rely on the repressive might of the military. Islamists have generally fared well in elections, but because of emotional appeal rather than competence in governing. So secularists have ended up monopolizing power by excluding and repressing Islamists. The predictable result has been radicalization of the Islamists, after they lose trust in the hallowed principles of democracy and human rights.”

The conspiracy theories and rumors regarding the fuel and power shortages have peaked when following the ousting of Mohamed Morsi, there miraculously was relief from the hot nights with no power and the long lines waiting for fuel. Farah Halime highlights the many and conflicting perspectives of why this happened. Some believe it is indicative of Morsi and his government’s incompetence, while others believe it was part of a planned effort by the armed forces to undermine Morsi’s leadership and lead up to the coup. Halime mentions the commonly referenced explanation that energy demand went down when up to seventeen million protesters hit the streets. “It is rational to expect that with business pretty much at a standstill on the anniversary of Mohammed Morsi’s presidency, the demand on domestic energy was actually quite low, meaning we were in a comfortable position for the days leading up and after his ouster.”

Halime also highlights the subsidy crisis Egypt is suffering from, with Egypt buying energy products at international prices but selling it a decreased cost and a population consuming more energy than Egypt is actually producing. She concludes saying, “Instead of focusing our energy on these pointless theories that are fabricated by those who are greedy for power, the interim government should focus on how to relieve pressure building up as a result of  this system soon, before Egypt experiences another bout of shortages which will no doubt be blamed on one unsuspecting group.”

In October 2012, before ex-president Mohamed Morsi took sweeping powers for himself and before the latest wave of mass protests, in just under three minutes this twelve year-old boy “articulates the opposition movement’s gripes and complaints with surprising sophistication and a remarkably clear-headed passion. At some point, maybe when he explains the contradictions between a constitution meant to enshrine the rights of women and a parliament that had carved out broad exceptions for conservative interpretations of Islamic law, the young Egyptian takes a leap from precocious to downright impressive.” [Washington Post]

This Day in History

On July 8, 2011, Egypt’s protesters, both liberal and members of the Islamist fronts, staged a several week long sit-in in Tahrir Square, with thousands of citizens participating. A city of shade was created, and fans installed in makeshift tents. A makeshift school was created where street children would each claim a tent as their own.

In “Why Is the Revolution Stagnating?,” Armin Rosen describes the environment on the ground, only four days into the sit-in, on July 12, two years from today. After days of taking shifts at the entrances to keep out thugs, weapons, and drugs, many Egyptians began to fear that the revolution was stagnating. This came with the unexpected Friday departure of the Muslim Brotherhood as they left the square and the sit-in, viewed by the liberal protestors as a betrayal of commitment. Armin Rosen concluded that “Although the protests continue, it’s clear that the country is now in the clutches of something far more ambiguous.”

Translation: The apple represents “Legitimacy,” the arrow reads “Remnants of the old regime,” while the girl represents “Egypt.”
Drawn by Gaza-based cartooonist, Omaya Joha, the cartoon was published in the Brotherhood’s Freedom and Justice newspaper.
Cartoon: Oum Cartoon

Translation: “We are defending democracy, you infidels”
Cartoon: AMAY