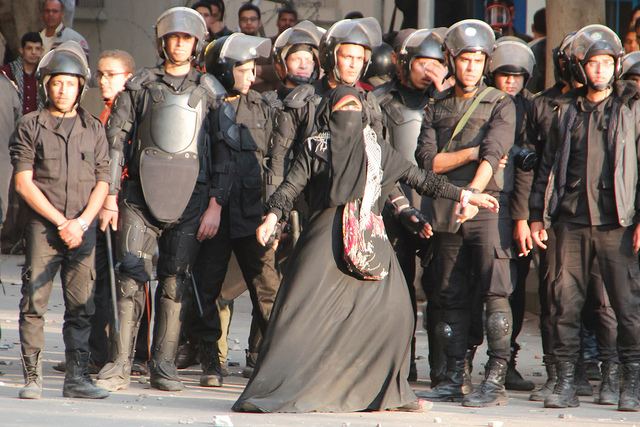 Mokhtar Awad writes about Port Said, placing today’s protest in the context of the city’s troubled history, and how what the government has done isn’t enough:

“The government’s latest announcement of legislation providing for a continued duty free zone and appropriating more Suez Canal revenue to develop the canal cities has been rejected as a cheap and opportunistic attempt to buy the city’s silence. If anything, the knee-jerk reaction by Morsi to offer these belated economic incentives proves to Port Saidis that Cairo only cares about its centralized interests. For the city to begin to heal its wounds and trust the government once more, the cabinet must take serious and immediate action to completely address the demands surrounding the ongoing cycle of violence as well as resolve the city’s precarious economic straits. This is the only path to reinvigorate a city that is still waiting to realize its full potential.”

Khalil al-Anani asks why “Why have President Mohammed Morsi and his patron, the Muslim Brotherhood, failed, so far, in running Egypt’s transition?”:

“There are two ways to answer this question. The first is short and easy, ascribing this failure to the Brotherhood’s ideology and its hunger for power. The second — which is the tougher one, providing an intricate answer — is pertinent in the ability and readiness of the Muslim Brotherhood, as a social and political agent, to adapt to the new environment and realities that emerged in Egypt after the revolution…

If ideology did not lead to the failure of the Muslim Brotherhood in ruling Egypt over the past few months, what did? Among many other factors, one could attribute this failure to the lack of governing skills and aptitude among the Brotherhood’s leaders, members and cadres — or, in short, their incompetence… Since its foundation in 1928, Brotherhood members were trained on how to protest, oppose and challenge political regimes, but not how to govern or rule…Furthermore, the Brotherhood’s cadres never ran a public institution, whether on a local or national level. They were barred from public office and excluded from having influential posts within state bureaucracy.”

Writing about talk of a military takeover in Egypt, Chibli Mallat warns:

“Any such coup would be a disaster, not only because Egypt risks a fate similar to that of the horrendous Algerian civil war between the army and the Islamists that lasted a full decade, but also because of the loss of all the extraordinary achievements of the Nile Revolution: the successful defeat of the dictator by chiefly nonviolent means, and the outbreak of freedom and dignity.”

His advice to Morsi to quieten talk of the army stepping back into a political role is the following:

“The first step is to appoint a prime minister from the opposition, and to establish a seriously comprehensive Cabinet that includes leading figures from the revolutionary coalition. This would actually be sufficient to bring some calm to a boiling Egypt and push back the spectre of military putsch and/or civil war.

Beyond that, Morsi should step back, and let the coalition Cabinet lead and take measures needed to further calm the street. Many are economic and Egyptians will agree that tourism needs to be back in full force, and that unrest cannot degenerate into violence.

A calmer, united Egypt will allow citizens to resume their normal activities and for foreign visitors – who dropped by 37 percent in 2012 – to return to Egypt.

Others are steeped in basic human rights: violence against women should be punished severely, the police must be urgently reformed away from both dereliction of duty and brutal arrests and prison exactions, former regime leaders should be banned from elected office and tried if there is blood on their hands, and the Nile Revolution in its original pristine nonviolent and free spirit should be honored as the beacon for change in the region.”

A Port Said father, Shaaban Mohamed Hassanein, speaks about his sons, one sentenced to life in prison, and the other one of 21 who received the death sentence

On the doctor’s strike: "These flowers are for the sick person in the room… Which one of you is it?" (Egypt Independent)

Photo: On March 5th in Tahrir, a woman tries to stop protesters from throwing stones at riot police after they promised to release her arrested brother. According to the photographer, he was never released. (Bora S. Kamel)