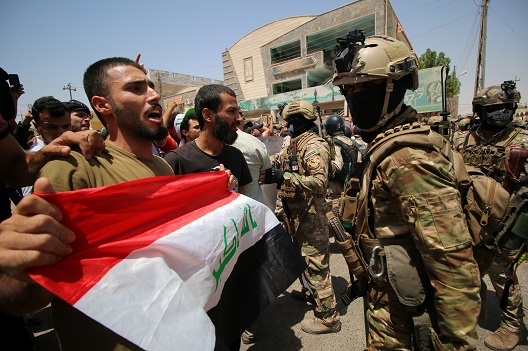 Protests raging in southern Iraq foretell the potentially dire consequences if political leaders in the country are unable to form a government in the coming months. Unrest has culminated, after subsequent summers with widespread power outages and frustration in a government widely perceived as corrupt, in at least fourteen demonstrator deaths since early July and protester clashes with Iraqi security forces.

The Iraqi Federal Supreme Court ratified the May parliamentary elections on August 19 after a recent recount. The clock starts now on a constitutional timeline to form a government. According to the Iraqi constitution, several steps must occur over a three month timeline as follows:

1.       Within fifteen days of the ratification of the election results, the president calls on the Council of Representatives (CoR) to convene.

2.       Within thirty days of this first convening, the CoR elects a new president.

3.       Within fifteen days of the president’s election, the president calls on the nominee, known as the Prime Minister-designate, of the largest political bloc in the CoR to form a government.

Shortly after the supreme court’s announcement, Prime Minister Haider al-Abadi called on the Iraqi president, Fuad Masoum, to convene the first parliamentary session. Within hours, the blocs of Abadi and the parliamentary elections victor, Muqtada al-Sadr, announced an alliance with the Hikma and Wataniyah parties, agreeing “to form the core of an alliance that will seek to form the parliamentary bloc that can form the government.”

The developments on August 19 mark progress, but the alliance’s statement highlights that the parties to the agreement cannot guarantee a successful process. Their alliance remains short of a majority in parliament. Certain blocs may also continue to seek power for its own merits instead of focusing on forming a stable government. Recent advances demonstrate that the next government in Iraq could be more inclusive and independent than those proceeding it—a change necessary amid popular unrest—but only if Iraqi political leaders are able to come together to form a government.

Muqtada al-Sadr’s Sairoon alliance won the greatest number of seats in the parliamentary elections on a cross-sectarian and anti-corruption platform. On July 31, amid protests and political negotiations, Sadr set out forty conditions for his support to the next prime minister.

These conditions simultaneously complicate and bolster the government formation process. First, the condition that the prime minister be independent and not from parliament essentially eliminates two bloc leaders—Abadi and Allawi, head of the Wataniyah party—as candidates for the position. While these leaders may have to some extent agreed to this condition in forming the August 19 alliance, they may renege on this agreement particularly if the alliance has difficulty finding a compromise candidate. Meanwhile, if Sadr were to compromise on this condition, he risks losing popular support—especially given recent protester criticisms of Abadi—and solidarity within the Sairoon bloc.

Further, the condition stipulating parties nominate five technocrats to ministerial positions may hinder the alliance’s ability to garner 165 votes to approve the proposed government. The 2010 and 2014 election processes resulted in diverse candidates in many ministerial positions in exchange for party support in approving the government. Absent this leverage, the Sadr-Abadi-Hakim-Allawi alliance may struggle to gain the twenty-nine additional votes necessary for government approval, even if the core of the alliance remains intact.

Nonetheless, if Iraqi politicians are able to form a government at least generally consistent with Sadr’s conditions, the resultant government may best position Iraq on a path toward an inclusive and independent country. In the past decade, trading ministerial positions for votes, along with broad participation precluding a unified vision, contributed to Iraq’s rampant corruption and legislative paralysis.

Protests have roiled the southern city of Basra and, to a lesser extent, cities across Iraq since early July. These protests are not particularly unique—crowds from hundreds to thousands of Iraqis gathered to demand improved services, jobs, and an end to corruption. In recent years and again in July, Ayatollah Ali al-Sistani amplified the voices of the protesters, calling for new leadership and speaking out against sectarian divides.

However, some recent protests are unique in their criticisms of Abadi. Shortly after Sistani blamed Abadi for the corruption and other shortcomings, protesters in Baghdad voiced largely unprecedented direct criticisms of the prime minister. This popular discontent focused on Abadi complicates alliance negotiations as Sadr and other leaders need to consider how supporting an Abadi premiership might impact their popular support and stability in the country.

Further, the intense nature of protests in Iraq suggest popular unrest may be a threat to the country’s stability. The official Iraqi government response to protests ranged from criticism to acknowledgment of their demands. Meanwhile, while many protests have taken place without violence, several protesters have died in the past several weeks. In particular, an August 15 protest was at least in part in response to an alleged Abadi-directed torture and killing of a protester in police custody. Protesters reportedly damaged property and Iraqi security forces injured over one hundred people and killed one person when firing live ammunition to disperse crowds.

Heightened unrest met with occasionally oppressive government actions could create a flashpoint for instability in the country. Abadi’s caretaker government should take great care to prevent violence and deescalate conflict rather than incite or initiate clashes. Further, the protests should generate a sense of urgency among political leaders throughout the coming weeks of negotiations toward forming a new government that can begin to work toward addressing the protesters’ concerns.

The United States reinstated sanctions against Iran on August 7 after withdrawing from the Iran nuclear deal. Initially Abadi voiced his intent to comply with the sanctions; albeit reluctantly. However, the following week Abadi indicated that Iraq will only abide the sanctions by not using US dollars in transactions with Iran. The sanctions place Abadi in the difficult position of navigating between demands and expectations of two allies: the United States and Iran.

Abadi’s actions may further impact whether Iran backs or impedes Abadi’s nomination for a second term as prime minister. The Iranian-backed Fatah and Rule of Law blocs, led by head of the Badr Organization Hadi al-Ameri and former Prime Minister Nouri al-Maliki, were the second and fourth place political blocs in the 2018 municipal elections. These blocs have formed a rival alliance to the Sadr-Abadi-Hakim-Allawi coalition. Iran could choose to back Abadi as a compromise candidate if Abadi does not align himself too closely to the United States. Iran, however if displeased with Abadi, could impede his appointment by encouraging militias allied with the rival bloc to engage in disruptive actions or by working to build a Shia coalition with minorities groups such as the Kurds.

Further, Iraqi compliance with US sanctions on Iran could greatly damage the already fragile Iraqi economy. Abiding by the sanctions would eliminate the source for several billions of dollars of imports, driving up prices in Iraq and fueling black market growth of Iranian-made goods.

Contrarily, a US backlash should Iraq not comply with sanctions could devastate the Iraqi economy reminiscent of the crisis Turkey is experiencing. While in one regard the Turkish crisis demonstrates the immediate effectiveness of US sanctions, the United States should consider its long-term interests, not to mention its ongoing military and diplomatic efforts, to foster an independent Iraqi state before it chooses to retaliate against Iraq.

The United States might best further its interests in Iraq through strategic messaging that focuses on the importance of following the constitutional deadlines toward government formation. In private, the United States may hold dialogue with Iraq regarding long-term ways in which the state can comply with sanctions while not destroying its own economy. However, the United States should not pursue its sanctions on Iran at the expense of stability in Iraq.

Many barriers remain on the path toward Iraqi government formation. Nonetheless, each of these barriers also present opportunities that may result in a more inclusive and independent Iraq. If Iraqi politicians are unable to navigate the complex process and form a government in the coming months, Iraq risks heightened instability in the face of popular unrest. But if Iraq is able to form a cross-sectarian government with a unified vision consistent with the Sairoon platform, Iraq may emerge a more stable democratic state than that in the past decades.