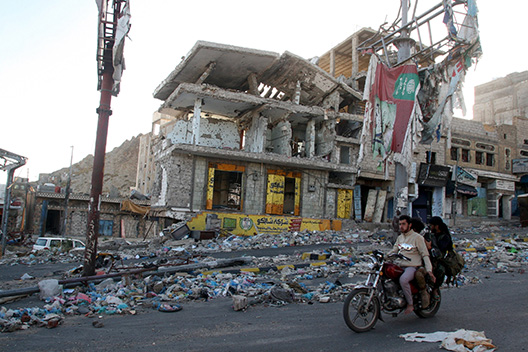 People ride on a motorbike past a building destroyed during recent fighting in Yemen's southwestern city of Taiz March 14, 2016. Reuters/Anees Mahyoub

The beginning of a UN-mediated ceasefire in Yemen on April 10 comes at a critical time for Yemeni, Gulf Arab, and UN diplomats. For the first time since December 2015, the warring parties are preparing for the resumption of comprehensive, face-to-face peace talks. As it stands, the talks have already been delayed due to ongoing fighting. Delegations representing the Houthis and supporters of ousted President Ali Abdullah Saleh did not arrive at the talks on Monday, accusing the Saudi-led coalition of not abiding by the April 10 ceasefire. UN Special Envoy Ismail Ould Cheik Ahmed, in the meantime, is trying to salvage the diplomatic process for an opening round of talks later this week.

Reports of sporadic clashes along key battlefronts, particularly in and around the hotly contested city of Taiz, persisted long after the temporary month-long truce was announced. Indeed, a cessation of hostilities is technically not a ceasefire agreement and is thus not legally binding on the warring sides. The litany of armed groups with competing agendas is almost a guarantee that any pause in fighting will not be foolproof and that some violations will occur.

The cessation of hostilities cemented by the UN is only a means to an end: tamping down the violence on the ground, halting air strikes from Saudi Arabia, and creating an environment could speed up the provision of food, water, and medical supplies to millions of Yemenis in desperate shape (according to the UN, approximately 82 percent of Yemenis require humanitarian assistance). The environment could also improve just enough for the parties to sit down and negotiate a full ceasefire and a working framework for how Yemen should be governed in the future.

In the event that the talks are successfully rescheduled later this week in Kuwait, the warring parties will be tackling a range of issues that has previously held up progress towards a resolution. Demobilization of the Houthis, the release of detainees, the rebuilding of state infrastructure, the transition of territory from armed groups to the legitimate Yemeni Government, and “interim security arrangements” will all be on the table.  As the initial postponement of the talks on April 18 demonstrate, the chances of failure are far higher than the slim chances of a breakthrough, but the dialogue in Kuwait could hinge on these three questions:

Can UNSCR 2216 be renegotiated?  In April 2015, the UN Security Council passed a resolution on the Yemeni crisis that has since come to define the international community’s preferences for how the civil war should end. The resolution requires the Houthis to take a number of steps in order to make a diplomatic settlement more palpable. The only problem however is that the Houthis have long viewed this resolution as a one-sided capitulation to the very government it is aiming to dislodge. The resolution calls on the Houthis to “immediately and unconditionally” refrain from further acts of violence; withdraw from the territory it has taken and hand over control of that territory to the Yemeni Government; cede authority over all of its heavy weapons; and release all detainees in its custody. In the past, the Hadi administration has categorized these demands as preconditions before any talks about a political transition can occur.

If Hadi’s delegation enters the talks next week on the assumption that the Houthis will need to meet all these conditions before discussions about governing occur, then is it exceedingly unlikely that diplomacy on April 18 will prove any more successful than last December’s efforts. The Security Council is responsible for defending and upholding international peace and security, but on Yemen, the council may be in the ironic position of making peace more difficult through an uncompromising resolution that one side in the conflict has long believed is unfair.

Will the Saudis and the Houthis continue to talk?  Over a span of two weeks in March 2016, Saudi Arabia and the Houthis engaged in a series of partial agreements outside of UN channels. With the help of tribal mediation, the Saudis and Houthis conducted two prisoner exchanges — one on March 14 and a larger swap on March 28 — and agreed to facilitate the provision of humanitarian aid across the Saudi-Yemeni border to towns in the north that have been struggling to sustain themselves during the Saudi air campaign.  Although relatively minor in the grand scheme of Yemeni peace talks, the Saudi-Houthi agreements produced deliverables that were in the interest of both sides. Regardless of the success of the peace talks in Kuwait, Riyadh and the Houthis may find it worthwhile to continue discreet discussions with one another with the objective of agreeing to further prisoner exchanges. This could place a cessation of hostilities in the border region on more solid footing, and perhaps, most importantly, establish a reliable channel where dialogue can continue if the UN-mediated peace talks collapse.

Will Hadi continue to be President? Abd Rabbu Mansour Hadi is apt to claim that he alone is the legitimately elected and internationally supported President of Yemen. While this is technically true (Hadi was the only name on the ballot in 2012), he has spent far more time in Riyadh than in Sana’a or Aden. The government he leads has spent more months in exile over the past year than it has spent inside of Yemen’s borders. Indeed, if it were not for the military backing of Saudi Arabia and the United Arab Emirates, Hadi’s tenure would have been dissolved as soon as the Houthis swept into Yemen’s capital city in September 2014.

Discussions revolving around the creation of a transitional governing authority will  become even more difficult in the event that the Houthi delegation insists on Hadi’s resignation. If reports are to be believed, Hadi’s resignation is being described by some members of the Houthi movement as a principle that cannot be shortchanged or ignored during the negotiations Hadi’s status has received even more scrutiny over the past several weeks after his sudden dismissal of Yemeni Prime Minister Khaled Bahah and his appointment of a Ali Mohsen al-Ahmar as Vice President — a move that Secretary of State John Kerry called unhelpful in the run-up to the talks.  The removal of Bahah from his prime ministerial portfolio caught many observers of the Yemen conflict by surprise; Bahah’s relatively prestige reputation, his willingness to take anti-corruption measures seriously, and his promotion of national reconciliation measures to end the war were the very same beliefs that would assist an ongoing peace process. Hadi’s decision in effect removes a believer in negotiation and an individual who in the past has received a certain amount of respect from the Houthis. The more the Yemeni government delegation is seen as intransigent or inflexible at the talks, the greater likelihood that Hadi will be seen as part of the problem rather than an incremental part of the solution.

As in all negotiations to end civil wars, the key word in the peace talks is “compromise.”  If the Houthis and Hadi are unable to defer to compromise, then the violence will continue, hundreds more Yemeni civilians will die, and the prospects for diplomacy in the future will be hostage to even more resentment among the parties.