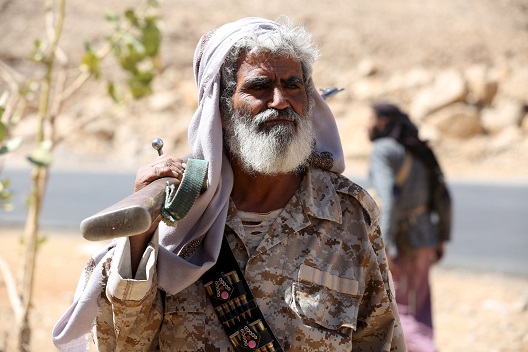 Tens of thousands of Yemenis gathered in the capital Sana’a to express their anger toward the government on February 3, 2011 in what was dubbed the “Day of Rage.” Five years later, a failed transitional process has led to open war between competing factions and their regional backers. As the war in Yemen enters its eleventh month, it behooves those hoping to see the conflict reach a peaceful end to reflect on those unknowns that would have a significant impact on the sustainability of a post-conflict Yemen. Three such issues include public perceptions of the conflict, the cohesiveness of the Zaydi population, and the stances of heavily armed and powerful tribes.

What Yemenis Are Thinking

Public opinion data in Yemen was available before the war through Sanaa-based Yemen Polling Center, the Arab Center for Research and Policy Studies, and the Arab Barometer, among others, but only one nationwide poll has been completed in the past year. Conducted by Gallup, the data demonstrate what we already know: most Yemenis (71 percent) find it difficult or very difficult to get by on their income; 45 percent have lost their main source of income due to the war; and 94 percent are either struggling to get by or else suffering (6 percent are “thriving”). But the report estimates that 30 percent of Yemenis were not represented in the sample due to the war. Were they to be polled, the results would likely be much worse.

Beyond knowing of Yemeni suffering, we know little about how they view the war—other than they want it to end. Social media and what limited reporting exists convey anecdotal stories of anger toward all sides. But do any groups enjoy popular support beyond their immediate numbers? Houthis seem to have little support in the south, but how strong is their support in the north? Hadi is described as having little support inside of Yemen, but how low is “little”? What political parties or groups retain any real basis of support? Even more than asking “how much” support, what does support or loyalty mean? That is, under what conditions might we expect it to erode or sustain?

What about Al-Qaeda in the Arabian Peninsula (AQAP) and the Islamic State (ISIS or ISIL)? How was AQAP able to take over much of the Hadramawt valley and the Mukullah port? Earlier this week it seized Azzan, a southern city of 70,000, without any opposition. We do not know if southerners are increasingly sympathetic to AQAP, or if they are just suffering from war fatigue.

What Being Zaydi Means, Even to Zaydis

The Houthis belong to Yemen’s Shia Zaydi Community, some 30-40 percent of the population. Zaydis take their name from Zayd bin Ali, the grandson of Hussein bin Ali. Their jurisprudence is far closer to the Hanafi school of Sunni jurisprudence than it is to the Twelver Shia Islam dominant in Iran. But since a major concern of the Gulf states has been the spread of Iranian influence, Yemen’s Houthis are an obvious target. With the overthrow of the Assad regime in Syria increasingly unlikely, Yemen has emerged as the one place where Saudi Arabia and its Gulf allies see the possibility of crushing Shia power.

But who are the Zaydis politically? In the 1960s, prominent Zaydis sheikhs helped overthrow the Zaydi Mutawakkilite monarchy that had ruled much of northern Yemen for a millennium. Ali Abdullah Salih (also Zaydi) seized control of the north in 1978 and ruled until forced out in 2012, but sectarian identity played no role in his claims to political authority. The wars between Saleh and the Houthis that began in 2004 entailed further intra-Zaydi fighting, with the (Zaydi) General Ali Muhsin al-Ahmar—a member of Salih’s own Sanhan tribe—leading regime troops against the Houthis. Sheikh Abdullah bin Hussein al-Ahmar, longtime Speaker of the House and head of the Islamist Islah party until his death in 2007, was also Zaydi. But he had become close to the Saudis and practiced a Wahabbi brand of Sunni Islam, all while continuing his role as head of the powerful Hashid (Zaydi) tribal confederation. During the 2011 uprising, General Ali Muhsin broke with Salih to support the protesters, taking half of the army with him.

History clearly tells us that conflicts in Yemen have included as much Zaydi-Zaydi fighting as they have Zaydis fighting Muslim of other sects. Few in Yemen viewed these contests as primarily sectarian because the disputes were based in other power struggles.

The war in Yemen did not begin as a Sunni-Shia sectarian contest. The Gulf states may see it as such, but recall that the transition period broke down because Hadi had begun to stack powerful committees exclusively with allies, not because of sectarian strife. By insisting that Yemen’s domestic conflicts are sectarian-based, the Gulf states are acting as identity entrepreneurs. AQAP and ISIS, while hardly Gulf allies, also advance narratives of Sunni-Shia hatred. With Iran now the only friend the Houthis have, it is unsurprising to see their relationship deepening. Most tragic is the impact of this new sectarianism on the Yemeni people. As the ongoing violence is framed as Sunni versus Shia, those identities seem to be becoming more solidified.

Sectarianism is becoming real, but it may not be too entrenched to take a different path. We simply do not know where the broader Zaydi community and other centers of power stand in the conflict and whether they are latching hold to sectarian understandings of the war.

If Yemeni tribal groups possess some 60 million arms outside of government control, who controls them now? Some tribes have clearly chosen sides, but we do not know where others stand. Even for those actively fighting, we do not know whether those alliances will endure over time.

Yemen’s many armed tribes have always functioned as competing centers of power to the central government and they have been proud of their autonomy. Following Yemen’s unification in 1990s, many tribes accepted Saudi citizenship in support for their loyalty to the kingdom, only to burn their new passports in bonfire parties after pocketing large sums of Saudi money.

During the 1994 civil war between the armies of former North and South Yemen, many of the armed tribes remained on the sidelines. Some were likely paid to do so by Saleh and his northern allies, but the bottom line is that they did not intervene when they might have aided one side or the other. Saleh soon defeated the southern army, but over the next decades he struggled to appease these many armed tribes.

During the uprisings, tribes adopted a wide range of positions. Some defected from the regime to support the protesters; others took advantage of the turmoil to reassert or expand their authority while the regime was in turmoil. With the war, the strength and loyalties of these various groups is even more in question. Some can be seen choosing sides, moving troops into certain areas to assist one side or another. We simply do not know where every tribe stands in the war, nor do we have reason to believe that wartime alliances will remain stable when the fighting subsides.

Even more, it is not clear what “tribe” means anymore. Some tribal elites have fled to urban areas like Sana’a, creating the phenomena of city sheikhs. Having left their constituencies behind, these tribal leaders may be losing the loyalty of their support base, particularly the younger members. Unable to provide employment and security, or to resolve local conflicts, they appear to be losing the moral authority that undergirded their power. While tribes in Yemen never functioned in a singular or unitary manner, the strength of tribal affiliations is no longer even clear.

But the arms remain and tribal groups will certain endure as powerful actors in postwar Yemen.

Image: A tribal militant loyal to Yemen's government holds his weapon as he secures a road taken over by the pro-government army and tribal fighters from Houthi militants in Furdhat Nihem area near the capital Sanaa February 3, 2016. (Reuters)