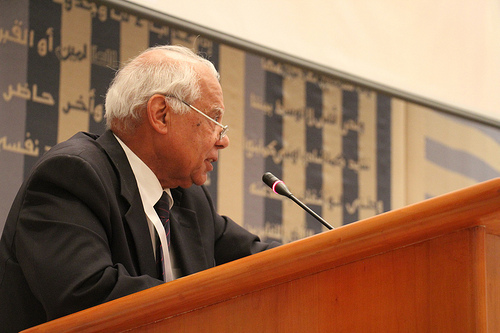 After talk of a swearing in on Wednesday morning, in the usual rushed fashion, thirty-four ministers were sworn into Egypt’s cabinet on Tuesday afternoon. While many of the names floated over the past few days have remained the same, a few changes have been seen, along with some last-minute withdrawals. Most notable in the interim cabinet is the complete absence of any Islamist members, and the appointment of Minister of Defense Abdel Fattah al-Sisi as a deputy prime minister.

While the name of the Social Democratic Party’s Ziad Bahaa-Eldin had come up previously as a possible candidate for deputy prime minister, in the final announcement, he was joined by Minister of Defense Abdel Fattah al-Sisi. Al-Sisi’s appointment flies in the face of a military that has repeatedly stated it does not want an overt political role in Egypt’s transition. As Egypt’s interim government battles the label of a ‘military coup’ when describing former president Mohamed Morsi’s removal, al-Sisi’s appointment is problematic, but also does not come as a surprise. In his most recent statement in which he defended the army’s move to remove Morsi, Sisi was quite forthcoming about conversations he had with Morsi, encouraging him to hold a referendum, which he says Morsi ignored. Explaining the military’s stance, he said, “Even though circumstances have forced the Supreme Council of the Armed Forces (SCAF) to get close to the political process, it only did so because the people called for it.” With his appointment as deputy prime minister, the armed forces is edging ever closer to that political process.

The cabinet also includes several holdovers from Qandil’s most recent cabinet – among them the ministers of interior, electricity and and tourism. There are others who were replaced in the May 2013 reshuffle including Ashraf al-Araby, serving as minister of international cooperation and planning, who now returns as the minister of planning. Mounir Fakhry Abdel Nour, who served as a minister of tourism in Ahmed Shafiq’s cabinet, and refused a post in the Morsi government, returns as the minister of industry. Only three out of thirty four ministries are headed by women – the ministries of health, environment and information, while the latter could be scrapped. The ministry of culture was also to be headed by a woman, namely Inas Abdel Dayem, the head of the Cairo Opera House who was sacked by Muslim Brotherhood minister, Alaa Abdel Aziz, but she withdrew her acceptance at the last minute.

With no Islamists swearing in on Tuesday, the interim cabinet is composed entirely of liberal, independent and technocrat members. In fact, several of the candidates accepting positions in the Beblawi government turned down similar offers to join the Qandil cabinet. At the time, Emad Gad of the Social Democratic Party, for example, said that his party refused positions in the cabinet because they wanted to leave the burden of responsibility entirely with the Muslim Brotherhood, and its Islamist allies.

One of the few Islamist parties that has been involved in talks with the interim president and his government, the Nour Party has repeatedly refused positions in the cabinet. Al Ahram reported that Nour members who were offered positions in the cabinet included Ashraf Thabet, as minister of agriculture, and Khaled Alam al-Din, as minister of environment. The rejections are by no means a new stance for the Nour Party. In 2012, they turned down positions in Hisham Qandil’s cabinet, after Morsi allegedly failed to fulfill his promise of offering them three ministries, as well as a vice president post. At the time, offered only the ministry of environment, the Nour Party withdrew from the government, saying that the ministry was not “worthy” of the party. The Nour Party appears consistent in its desire to have a role in the decision-making process – rejecting Mohamed ElBaradei’s appointment as prime minister for example – without having to shoulder any of the blame should things deteriorate. It also accused the current government of repeating the same mistakes made by Morsi’s government, by putting together a “biased” group of ministers.

Beblawi is facing the same difficulties Qandil faced – with one side of the political spectrum refusing to cooperate with him. While highly competent, no matter how qualified Beblawi’s government may be, if it is working in isolation of a significant segment of the political spectrum, can it succeed? And a complete lack of Islamists in the cabinet does not bode well for planned national reconciliation talks. The backdrop of economic collapse and political instability that faced Morsi’s government is now joined by increasingly worrying security concerns in Sinai, an increase in sectarian attacks against Egypt’s Christian minority, and thousands of protesters camped out in Raba’a al-Adaweya, whose main demand is no less than the reinstatement of Mohamed Morsi. As clashes continue to break out between Morsi supporters and Egypt’s security forces, the death toll now at about sixty, much needed dialogue, reconciliation and a consensus government seem all the more distant.