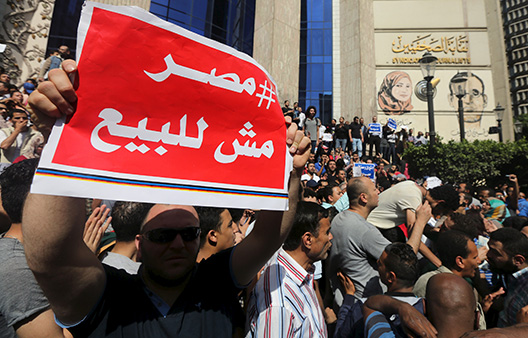 An Egyptian activist holds a sign that reads "Egypt is not for sale" during a demonstration protesting the government's decision to transfer two Red Sea islands to Saudi Arabia, in front of the Press Syndicate in Cairo, Egypt, April 15, 2016. (Mohamed Abd El Ghany/Reuters)

In mid-July, nine opposition parties, seven human rights organization, and over 100 political figures signed a statement denouncing what they described as a harsh three-year prison sentence, and a fine of 100,000 Egyptian pounds, issued by a Cairo court against ten demonstrators. They were sentenced on charges relating to a protest against the controversial maritime border agreement signed with Saudi Arabia in early April. Their lawyers have said they will appeal the sentences.

The sentences came as a setback for opponents to the deal after an Egyptian court in late June ruled to annul the agreement in which Egypt ceded sovereignty of the Red Sea Islands, Tiran and Sanafir, to Saudi Arabia. In the unexpected decision by the Egyptian State Council’s administrative court, the court ruled that the historical documents presented confirmed Egypt’s sovereignty over the islands. A few weeks earlier, the Giza Court of Appeals also overturned five-year jail sentences against 47 Read Sea island protesters, but did uphold fines of 100,00 Egyptian pounds for each. Another 102 defendants tried in two separate cases in the Qasr al-Nil Court have also been acquitted. In one case, 51 defendants were sentenced to two years, and acquitted upon appeal. In the second case, the other 51 defendants were acquitted by first a degree court. Nonetheless, these ten defendants join another seven sentenced to eight years on protest charges, as well as charges that they were planning a terrorist attack.

In the wake of the sudden announcement of the agreement, several thousand took to the streets in an impromptu, and largely peaceful, protest on April 15. When opponents to the agreement announced a second wave of protests on April 25, they were met with a harsh response from security forces. According to The Front in Defense of Egypt’s Demonstrators, which included lawyers who volunteer to defend peaceful protesters, at least 1,500 people were arrested nationwide in the period between April 15 and April 25 for taking part in demonstrations against the Tiran and Sanafir deal.

While the majority of those arrested were released days later, over 200 were referred to trial in several separate cases on charges of for violating the Protest Law. The majority received prison terms ranging between two and five years by first degree courts, and were later acquitted upon appeal.

The most recent case involving the ten defendants sentenced to three years was the last of the trials related to the April 25 protests, and lawyers were optimistic that their clients would be acquitted. They were arrested just after starting a small march in the densely populated, poor neighborhood of Boulaq al-Dakrour, and the court had already ordered their release pending trial, giving the impression the judges did not believe they faced serious charges.

Nine of the 10 defendants were released, and none were present when the sentences were issued on July 14. Hamdi Kamal, also known as Hamdi Eshta, was the only defendant in the case still in prison when the sentence was issued. He was detained on charges in a separate case involving several other prominent activists accused of leading the call to protest against the Tiran and Sanafir agreement. Together with six other defendants, Eshta, also a member of Dostour Party, was charged with threatening stability, spreading false rumors, and forming a secret, illegal organization aimed at toppling the regime.

This same charge has been leveled against one of the lawyers who was involved in the successful lawsuit against the Tiran and Sanafir agreements. Malek Adly, a prominent lawyer, along with eight other defendants including Amr Badr and Mahmoud Al-Saqa, the two journalists arrested by police while seeking refuge inside the Press Syndicate on May 1, are charged with seeking to topple the regime and forming an illegal organization. Adly has been in prison since May 6, and according to his wife, has been kept in solitary confinement. His detention has been renewed on a regular basis since his arrest every 15 days. The last renewal was on July 18, with no date in sight for his trial.

Tarek Awadi, one of Adly’s defense lawyers, accuses security agencies of “taking revenge” on Adly for his outspoken opposition to the deal with Saudi Arabia. “This is revenge for Adly and his colleagues, and not administrative detention,” Awadi said. “There have been no new investigations since his arrest in early May, and there is no reason to keep him in prison for more than 70 days,” Awadi told MENASource.

In the statement issued by the eight political parties, human rights organizations, and public figures on July 19, they demanded the release of all defendants who remain in prison for opposing the deal with Saudi Arabia. “We were hoping that the authorities would reconsider its crackdown on those who oppose giving up Egypt’s territory following the Administrative Court ruling, annulling the deal with Saudi Arabia,” the statement said. “Instead, the government appealed the ruling, and continues to suppress young Egyptians through such harsh sentences that were issued against Hamdi Eshta and his nine colleagues,” it added.

The signatories also noted the acquittals by other courts in similar cases which they say confirm that the majority of arrests carried out by security agencies on April 25 were arbitrary, and that no solid evidence was presented against the defendants.