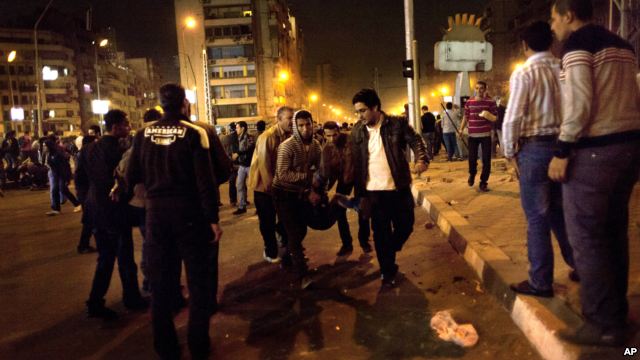 Clashes between supporters of President Mohamed Morsi and his opponents which started on Wednesday night have left six dead and 450 injured, according to the health ministry. Hospitals in the Heliopolis area continued to receive casualties of gunshots and rock throwing into the early hours of Thursday morning.

VP invites opposition powers to discuss draft constitution
Vice president Mahmoud Makki has invited opposition powers objecting to the draft of the new constitution to submit their proposals on controversial articles and to sign a national consensus initiative. Makki, in a press conference at the presidential office, suggested the formation of a panel of constitutional law professors to achieve consensus on controversial provisions, noting that the political disputes are mainly centered only on the wording of 15 articles. [Egypt Independent, SIS, 12/5/2012]

Following clashes, Morsi adviser retires from politics
Coptic thinker Rafiq Habib, a leader in the Muslim Brotherhood’s Freedom and Justice Party and adviser to President Mohamed Morsi, announced Thursday his retirement from all political posts, including any role in the presidential office or the party. Habib announced his resignation on Facebook, adding that he plans to return to his job as a researcher and political analyst. Other presidential advisers including Ayman al-Sayyad, Amr al-Leithy, Mohamed Esmat Seif al-Dawla and Saif Abdel Fattah also resigned in protest of the violent clashes outside the presidential palace on Wednesday night. [Egypt Independent, 12/5/2012]

Abdel Moneim Aboul Foutouh issues 6 demands to resolve the current crisis
At a press conference, Abdel Moniem Aboul Fotouh, head of the Strong Egypt party, and former Morsi adviser, Seif al-Din Abdel Fattah issued a political initiative consisting of 6 points: repeal the constitutional declaration and agree with the Supreme Judicial Council on a new prosecutor general, postpone the referendum for one month, restructure the constituent assembly, form a committee of law scholars to improve the current draft, pull protesters from the street, and restructure the Interior Ministry, and change its leadership. [Strong Egypt Facebook Page (Arabic), 12/6/2012]

Prosecutor general asks prosecutors to send notice of referendum intentions
Prosecutor General Talaat Ibrahim Abdallah sent a letter to all of the prosecutions in Egypt saying that the Supreme Judicial Council has agreed to assign judges and prosecutors to oversee the referendum on the new constitution on 15 December, asking that anyone declining to participate should inform him within 72 hours as of Wednesday. Abdel Rahman Bahloul, a member of the SJC, said no one can force a judge to participate in the supervision of the referendum, pointing out that the committee would not be in trouble if many judges declined.  [Egypt Independent, Al-Jazeera (Arabic), 12/5/2012]

Diplomats refuse to supervise referendum vote abroad
More than 200 diplomats have said they will not supervise expatriate referendum voting on the draft constitution, which is scheduled to begin Saturday. Egyptians abroad are supposed to be able to cast ballots for four days in 137 embassies and 11 consulates. The referendum vote in Egypt is scheduled for 15 December. Diplomatic officials are boycotting the referendum to remain politically neutral, one diplomat said, and made the joint decision after protesters died Wednesday night in Cairo. However, Foreign Minister for Consular Affairs Ali el-Ashiry said on Thursday that the ministry is committed to hold referendum for nationals abroad as scheduled. [Egypt Independent, SIS, 12/6/2012]

Despite political turmoil Qandil promises 750 thousand jobs in 2012/2013
Prime Minister Hesham Qandil described the times we are passing through as “challenging” as he opened the Joint-African Development Bank (AfDB) and Social Fund for Development (SFD) youth employment forum in Cairo on Wednesday. “Challenging, but also very exciting, because we are witnessing history,” Qandil said. “Every time we come to a milestone the challenge becomes very high, but we overcome this challenge and move forward,” he added. The prime minister said the constitution was a major milestone “we will go to the people and see whether they want this constitution or not, then there will be parliamentary elections, provided that people say yes to the constitution.” [DNE, 12/6/2012]

Trade with Europe under threat
Several heads of Egyptian chambers of commerce expressed concern as to the potentially negative impact President Mohammed Morsi’s constitutional decree could have on local and regional trade, particularly with European nations. The European Union recently called on President Morsi to adhere to a democratic transition of power after his 22 November constitutional declaration. “The negative effects of the declaration have already been felt, with the European Union calling on Morsi to respect the democratic process and the independence of Egypt’s judicial, executive and legislative branches,” commented the President of the Chamber of Commerce of Al-Beheira governorate, Fathi Morsi. [DNE, 12/5/2012]

Egypt negotiates delaying foreign debt repayment
The Planning and International Cooperation Ministry is holding negotiations with creditor countries to delay an external debt payment of US$1 billion that was due at the end of November, an anonymous government official said. The step aims to maintain the foreign reserves so they would not be reduced to $15.5 billion before Egypt obtains an International Monetary Fund loan expected to be finalized on 19 December. A senior bank official denied that Egypt failed to repay any part of its external debts over the past two years, despite its financial troubles. [Egypt Independent, 12/6/2012]

6 dead, 450 injured in clashes at Egypt’s presidential palace
Clashes between supporters of President Mohamed Morsi and his opponents which started on Wednesday night have left six dead and 450 injured, according to the health ministry.
Hospitals in the Heliopolis area continued to receive casualties of gunshots and rock throwing into the early hours of Thursday morning. A tentative calm had settled on the Heliopolis streets surrounding the presidential palace by early Thursday after a night of rock throwing and fighting between the president’s supporters and opponents. Several armored personnel carriers and tanks were deployed in the area Thursday morning as about 2,000 Muslim Brotherhood members continued to chant pro-Mohamed Morsi slogans according to eyewitnesses. [Ahram Online, Egypt Independent, EGYNews (Arabic) 12/6/2012]

Al-Azhar body calls on Morsi to freeze constitutional declaration
Al-Azhar’s Islamic Research Academy, the body in charge of handing down fatwas, called on the president to freeze his recent controversial decree and start a national dialogue. President Mohamed Morsi angered activists and alienated proponents of democracy on 22 November when he issued a constitutional declaration expanding his powers and putting himself above judicial review. “The situation should be handled according to what preserves the unity of the nation and the safety of its sons,” the academy said in a statement. “The president of the republic must freeze the recent constitutional declaration and engage immediately in a dialogue that includes all political forces, without exception and without preconditions.” [Egypt Independent, EGYNews (Arabic) 12/6/2012]

State TV head resigns in objection to ‘the way the country is run’
State television head Essam al-Amir submitted his resignation to Information Minister Salah Abdel Maqsoud on Thursday to protest “the way the country has been run since [the president] issued the recent constitutional declaration.” Amir said in a press statement that the 22 November constitutional declaration, in which President Mohamed Morsi granted himself immunity from judicial review among other powers, divided the country. Privately-owned Al-Shorouk newspaper quoted Amir as saying that he could no longer work under the current circumstances or take part in the events in any way, so he decided to resign. [Egypt Independent, Ahram Online, 12/6/2012]

Interior minister: Police act with impartiality and integrity
Interior Minister Ahmed Gamal Eddin said Thursday that the police are exerting the maximum effort to secure citizens and facilities, stressing that policemen carry out their duties impartially and with integrity. Gamal Eddin added in a statement that he hopes people recognize the police force’s rational performance during this critical moment in the country’s history. Violent clashes between pro- and anti-Morsi supporters in the area surrounding the presidential palace Wednesday night left at least five shot dead and hundreds injured. [Egypt Independent, 12/6/2012]

Tanks deployed in Cairo after deadly clashes
Egypt’s worst violence since President Mohamed Morsi was elected forced the army to deploy tanks in Cairo Thursday, as hundreds of people were hurt in clashes between Islamists and the secular opposition. Morsi was expected to deliver a televised address to the nation after five people were killed overnight in the worst violence since his June election. [AFP/DNE, 12/6/2012]

UK in close contact with Egypt’s government and opposition
UK Foreign Secretary William Hague has said the only way of solving the current political crisis in Egypt is through dialogue.“We are in close contact with both the Egyptian authorities and leaders of the opposition,” Hague confirmed in statement. He added: "We urge all parties to resolve their differences through a process of dialogue which allows all voices to be heard.” [Ahram Online, 12/6/2012]

Also of Interest:
Washington, Paris and Berlin, the European Union condemns the violence at the Palace | AMAY (Arabic)