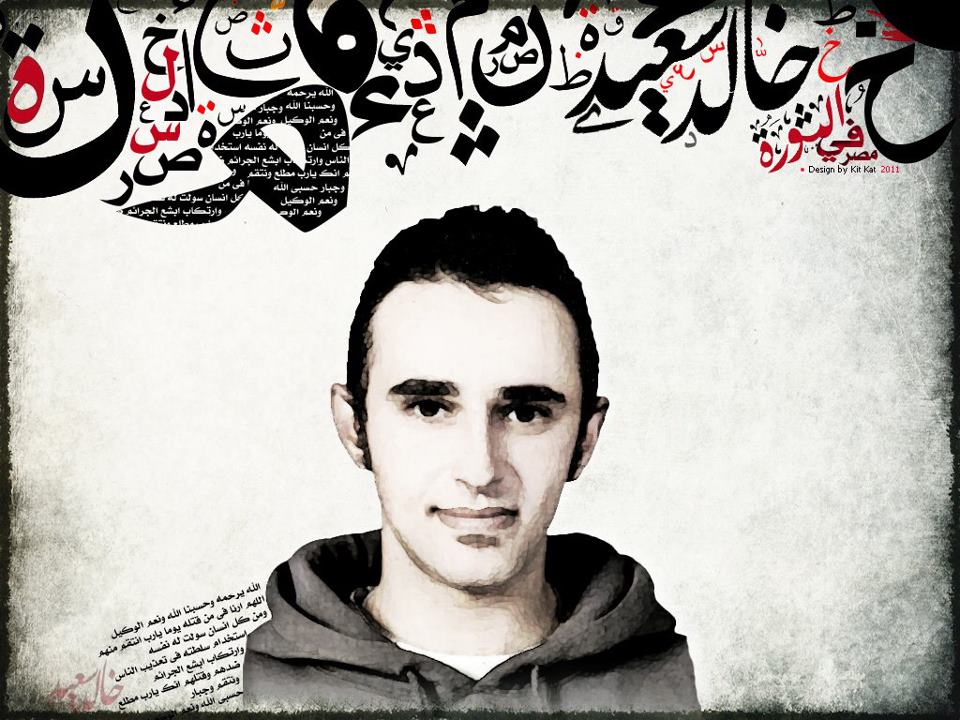 Dozens of April 6 Youth Movement activists protested outside the Giza Security Directorate at dawn on Thursday to mark the third anniversary of Khaled Said’s killing by police. The protesters chanted, "The police are thugs" and "My name is Khaled Said," and held banners condemning police repression of political activists.

Islamists call for dialogue on state institution reform
A number of Islamist parties called for holding a national dialogue to discuss the reform of Egypt’s state institutions. The aim of the dialogue is to resolve any difference of opinion on how to reform these institutions, including the judiciary. Following a meeting at the Freedom and Justice Party (FJP) headquarters, a joint statement was released by the FJP, the Nour Party, the Wasat Party, the Construction and Development Party and the Watan Party. The statement also called for holding House of Representatives elections as soon as possible. [Shorouk (Arabic), 6/6/2013]

NCHR calls for recommendations on draft NGO law
The National Council for Human Rights (NCHR) in a statement called on all organizations and civil society associations to submit proposals on the draft NGO law submitted by the office of the presidency to the Shura Council due to its important role within Egyptian society. The NCHR asked the organizations to submit their proposals by Sunday to include in any further discussion of the draft NGO law in the Shura Council. [Shorouk (Arabic), 6/6/2013]

Egypt court defends NGO verdict, decries US ‘soft imperialism’
Cairo Criminal Court on Wednesday released the details of its verdict that sentenced 43 non-governmental organization (NGO) workers to between one and five years in prison. Listing the main points behind the verdict, the court ruling started off with criticizing foreign funding as a new form of "control, predominance and soft imperialism practiced by donors to destabilize, weaken and dismantle beneficiary countries." The verdict said the US or any pro-Zionist country works against democracy in Egypt. [Ahram Online, 6/5/2013]

TV host interrogated, columnist sentenced to prison for libel
An Egyptian initiative for female lawyers has condemned the referral of television host Intisar Gharib to investigation for hosting a poet who recited an anti-regime poem.  The initiative expressed its utmost concern over, what it described as, attempts to target television hosts and opposition figures, to "silence the people". Meanwhile, writer Osama Gharib did not know he had already been sentenced to one year in prison by a Cairo court until being summoned to Moqattam Police Station on Wednesday. He was also fined EGP 10,000 ($1,400) for charges of libel and defamation. Ibrahim Mansour, acting chief editor of al-Tahrir, said that former minister of interior Mansour al-Essawi filed a report against Gharib accusing the columnist of insulting him in a column he wrote for the newspaper. The column criticized al-Essawi, Mansour said. He added that Gharib would be acquitted if he paid the fine. [Aswat Masriya, DNE, 6/6/2013]

Egypt’s FX Reserves Hit US$16.03 Bln, Highest Since Uprising
Egypt’s Foreign Reserves have recorded a remarkable rise of US$ 1.613 billion to reach US$ 16.03 billion by the end of June against US$ 14.4 billion last April, reporting its highest levels since the outbreak of January 25th revolution. A number of banking experts said the increase was backed by the Egyptian authorities’ settlement with a number of prominent businessmen, notably with Orascom Construction Industries and the US$ 3 billion aid from Qatar. [Amwal al-Ghad, 6/6/2013]

CAPMAS says 9.3% of children work
About 9.3% of Egypt’s children as young as five work, according to a report by the Central Agency for Public Mobilization and Statistics (CAPMAS), suggesting shortcomings in legislation to prevent child labour. According to the report, issued ahead of the World Day Against Child Labor on 12 June, the number of working children between the ages of five and 17 is 1.59m, or 9.3% of all children. [DNE, 6/5/2013]

Presidency holds meeting to discuss Sinai
President Mohamed Morsi met with governmental and security officials on Tuesday at the Presidential Palace to discuss the security and development situation in Sinai. According to state-run al-Ahram, the meeting discussed plans of various development channels, ways to eliminate criminal groups, and the latest updates of plans to spread security across the region. President Morsi emphasized on the importance of translating these plans into actions in order to benefit residents throughout Sinai. [DNE, 6/5/2013]

Rights groups address torture, freedom of speech, religion
The Egyptian Initiative for Personal Rights (EIPR) warned of escalating judicial hostility towards those who speak freely regarding religion and are then accused of contempt of religion, according to a statement released by the rights group. The statement comes amid growing charges of contempt of religion throughout the country. So far in June these charges have been brought against Mostafa Hassan Ahmed, a teacher in Sohag; Damiana Abeed Abdel Nour, a teacher in Luxor; and Romany Murad Sa’ad, who was sentenced to a year in prison and hard labour in Assiut. [DNE, Watan (Arabic), 6/6/2013]

Reactions vary to Tamarod’s 30 June plans
Tamarod’s call for mass mobilization and million man protest on 30 June was met with varying reactions from different political and popular factions. Liberal opposition such as the 6 April and Kefaya movements have announced their support and participation on 30 June. The National Salvation Front and al-Dostour Party also announced their “full support for Tamarod and will be present at the demonstrations on 30 June,” said Khaled Dawoud, spokesperson for the opposition front. The Building and Development Party and the Salafi Nour Party rejected the protests and Tamarod campaign, calling them “undemocratic.” “Freedom and Justice Party spokesperson Murad Ali said, “As long as the Tamarod demonstrations on 30 June are peaceful, then that’s good,” but added that the call for early presidential elections is unconstitutional. The Muslim Brotherhood announced it will not participate in the protests, except to “protect its assets.” [DNE, AMAY (Arabic), 6/6/2013]

Activists protest police brutality on Khaled Said’s death anniversary
Dozens of April 6 Youth Movement activists protested outside the Giza Security Directorate at dawn on Thursday to mark the third anniversary of Khaled Said’s killing by police. The protesters chanted, "The police are thugs" and "My name is Khaled Said," and held banners condemning police repression of political activists, al-Ahram Arabic news website reported. According to a report issued by El-Nadeem Centre for the Psychological Rehabilitation of Victims of Violence of Torture, twelve Egyptians were killed by police, 47 were tortured in police stations and prisons, and three were tortured at the hands of civilians during the month of May. [Ahram Online, Egypt Independent, 6/6/2013]

Lawmakers demand ‘immediate dismissal’ of charges against NGO workers
House lawmakers are gathering signatures on a letter to Egyptian President Mohamed Morsi calling for an “immediate dismissal” of prison sentences against 43 democracy activists, including 16 or 17 Americans. The letter, spearheaded by Reps. Gerry Connolly (D-Va.) and Frank Wolf (R-Va.), stated: “In order for the US government and the American people to have any confidence that the Egyptian government is undertaking a genuine transition to a democratic state, under civilian control, where the freedoms of assembly, association, religion and expression are guaranteed and rule of law is upheld, we must see a swift and satisfactory resolution to this case that takes into full account the concerns expressed in this letter, including revisions to the proposed NGO law.” A number of lawmakers, including Wolf and Sens. John McCain (R-Ariz.), Lindsey Graham (R-S.C.), Kelly Ayotte (R-N.H.) and Rand Paul (R-Ky.), have threatened to cut off the $1.5 billion in annual U.S. aid to Egypt if it’s not overturned. [Hill’s Global Affairs, 6/5/2013]

Egypt demands Ethiopia halt Nile dam, upping stakes
Egypt will demand Ethiopia stop building a dam on one of the main tributaries of the Nile, a senior government aide said on Wednesday, ramping up a confrontation over the project that Egypt fears will affect its main source of water. The high stakes involved were underlined on Monday when senior Egyptian politicians were caught on camera advising President Mohamed Morsi to take hostile action to stop the project, and one went as far as suggesting Cairo destroy the dam. The head of the Muslim Brotherhood’s Freedom and Justice Party (FJP) Mohamed al-Katatni, however, that a military response to Ethiopia’s Nile dam project "cannot be taken without the consent and support of the Egyptian people." Eleven Islamist parties announced a national, popular dialogue on the dam on Saturday. The meeting was followed with a press conference when they announced a set of points of agreement. Ethiopia’s Ministry of Foreign Affairs summoned the Egyptian ambassador in Addis Ababa to inquire about the threats proposed by politicians who had attended President Mohamed Morsi’s meetings with political powers.US State Department Spokesperson Jen Psaki said on Wednesday that the White House wishes that Egypt and Ethiopia would work together to make the effects of a dam that Ethiopia plans to erect on the Nile River beneficial for the whole region. Cabinet Spokesman Dr. Alaa al-Hadidi said resorting to international arbitration is one of the available options but requires both Egyptian and Ethiopian sides to agree on it. [Reuters, Ahram Online, DNE, Aswat Masriya, SIS, 6/6/2013]

Also of Interest:
Haddad: Trip to UK to prepare for president’s visit in July | EGYNews (Arabic)
EU rep: Arab countries should listen to their citizens | DNE