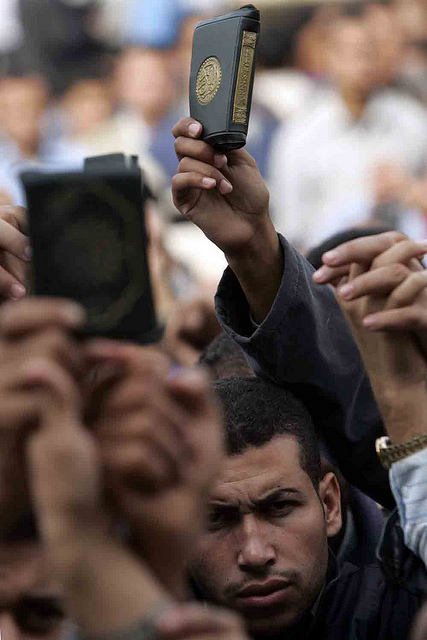 The Supreme Council of Al-Azhar on Wednesday dismissed the head of Al-Azhar University Osama al-Abd over the mass food poisoning of 561 students after eating meals at the university.

We still can ban religious slogans, says Elections Committee
The High Elections Commission can ban the use of religious slogans in campaigning although the Shura Council has allowed it, said commission spokesperson Hesham Mokhtar. “The final say is in the hands of the Constitutional Court,” he said. Mokhtar also said only minor amendments were introduced to the elections law. “For regulatory reasons, the general polling stations can now hand over the tallies to the provincial stations and not the Commission,” he explained. The Shura Council, headed by Ahmed Fahmy, approved the final draft law on political rights in its Wednesday morning session. That law allowed the use of religious slogans. [AFP/Egypt Independent, 4/3/2013]

Presidency denies filing complaint against Bassem Youssef
The presidency said in a statement just before midnight on Tuesday that it has not filed any complaints against satirist Bassem Youssef. The presidency said that Egypt’s legal system allows any citizen to file complaints at the prosecutor general’s office. The statement said Egypt is a state of law with an “independent Judiciary”, adding that the summoning of anyone by Prosecutor General Tala’at Abdullah is a decision independent from the executive branch. The summoning of Youssef has brought significant international attention to Egypt. American satirist Jon Stewart directed a whole segment to President Mohamed Morsi. [DNE, AP, 4/3/2013]

Gamila Ismail appointed organisational chief, Dostour Party to join protests
Political activist and former parliamentary candidate Gamila Ismail has been appointed organisational secretary of the Constitution Party, the liberal party announced on its official Facebook page Wednesday. The organisation secretariat that Ismail will take charge of, the party added, will be tasked with drawing up a special committee to oversee internal party elections this summer. According to a party statement released earlier, neither party founder Mohamed ElBaradei nor any other member of the party’s old guard, will contest the upcoming polls so as to "give an opportunity to the party’s young cadres." The Dostour Party on Wednesday called on its members and all Egyptians to join the protests ‘April 6’ movement has called for on its fifth anniversary next Saturday. [Ahram Online, Aswat Masriya, 4/42013]

Public Prosecutor to stay, says presidency spokesperson
Public Prosecutor Talaat Abdallah will remain in his position, said a spokesperson for the presidency, adding that a challenge to the court ruling ordering his dismissal and the return of former Public Prosecutor Abdel Maguid Mahmoud is still being looked into. At a press conference held at Ettehadiya Presidential Palace on Wednesday, Amr added that Prime Minister Hesham Qandil’s government is also remaining in office. Last week, the Cairo Court of Appeals reinstated former Public Prosecutor Abdel Meguid Mahmoud to his post, annulling a decree by President Mohamed Morsy replacing him with Talaat Abdallah. [Egypt Independent, SIS, 4/4/2013]

Egypt expects IMF loan agreement in two weeks, Decline in foreign reserves continues
Egypt’s planning minister said on Thursday the government expects to reach a final agreement with the International Monetary Fund (IMF) on a $4.8 billion (3.1 billion pounds) loan within two weeks, the state news agency MENA reported. Ashraf al-Araby also said that Cairo had not requested an increase in the amount of the loan. An IMF delegation resumed long-delayed negotiations with Egypt on Wednesday and government officials have said the team is expected to stay until April 15. The IMF has set no timeline for a deal and some private economists are sceptical that an agreement can be reached before parliamentary elections later this year because of the need to implement unpopular tax rises and subsidy cuts. The Central Bank confirmed recently it did not receive financial assistance from friendly countries during February and March. The bank did manage however to secure $1.3 billion last March to import the country’s needs of petroleum products and supplies, and cover part of the imported goods essential to various sectors of the state. [Reuters, Egypt Independent, 4/4/2013]

Poll: Egypt’s pound set to sag further against the dollar
Egypt’s pound will depreciate steadily against the dollar over the next 12 months, undermined by political and economic problems for the foreseeable future, a Reuters poll indicated on Wednesday. A poll on African currencies suggested the pound will weaken to around 7.08 per dollar by this time next year, from current levels at 6.8177. The pound has lost almost 13 percent of its value in the past 12 months. "It is a reflection of the weakness in the balance of payments, in light of the difficult political situation and economic situation," said Reinhard Cluse, chief economist for Europe and CEEMEA at UBS. [Egypt Independent, 4/4/2013]

Egypt denies Hamas man wanted for Sinai border attack
An Egyptian intelligence officer on Wednesday denied media reports that a top Hamas military commander was wanted by Cairo in connection with the killing last August of 16 border guards. The Egyptian presidency, meanwhile, said authorities were still investigating the attack. The government owned Al-Ahram Al-Arabi magazine last month reported that Ayman Nofal, a top commander in Hamas military wing the Ezzedine al-Qassam Brigades, was allegedly wanted in Egypt in connection with last year’s attack. But an intelligence official dismissed the report as "completely false." "We categorically deny this," the official said. The presidency said investigations into the attack "have not yet finished," state television reported. Hamas spokesman Taher al-Nunu told AFP that Al-Qassam Brigades had nothing to do with the August 5 Sinai attack. [AFP/Ahram Online, 4/3/2013]

Egypt activists besiege home of top Alex security official
Tens of political activists Wednesday surrounded the home in Alexandria’s Semouha district of the head of Criminal Investigations Nasser El-Abd, demanding release of detainees arrested last week during a protest at the home of the interior minister. The protesters chanted against the Ministry of Interior while besieging the house, complaining of the "Brotherhoodiasation" of the ministry. [Ahram Online, 4/3/2013]

Syndicate demands church apology over assault on journalists, Church apologises
The Journalists Syndicate on Wednesday condemned the staff of the Virgin Mary Church in Zeitoun for assaulting journalists responsible for covering Coptic issues, on Tuesday, saying this has occurred several times before. The syndicate said it would help the journalists file legal proceedings against the church. Cairo’s Virgin Mary Church has offered an apology to journalists who were allegedly assaulted Tuesday while covering the visit of Pope Tawadros II to commemorate the apparition of the Virgin Mary. Reverend Angelos, Pope Tawadros II’s secretary, told Al-Ahram the assault was a result of a “massive crowd and stampede” due to the large number of attendants. [Egypt Independent, Ahram Online, DNE, 4/4/2013]

Al-Azhar students end protest, university head removed
The Supreme Council of Al-Azhar on Wednesday dismissed the head of Al-Azhar University Osama al-Abd over the mass food poisoning of 561 students after eating meals at the university. The decision prompted students to end their protests, as the council formed a committee to conduct elections for a new president. Mohamed al-Badrawy, media coordinator for the Al-Azhar Student Union, said the announcement satisfies students’ demands. The Azhar University Supreme Council’s speedy dismissal of the university president following a recent outbreak of food poisoning on campus represented "an indication that Egypt’s revolution is on the right path," Mourad Ali, spokesman for the Muslim Brotherhood’s Freedom and Justice Party, stated on Wednesday. Making the statement on Facebook, the FJP spokesman added, "There is no room for corruption." Several leading officials of Al-Azhar University – including sacked president – were called in for questioning following the food poisoning scandal. [Egypt Independent, Ahram Online, SIS, 4/4/2013]

Presidency spokesperson: We did not respond to video posted by US Embassy on Twitter
The US Embassy’s Twitter page was put back online on Wednesday evening, after the US Ambassador made a temporary decision to shut it down for a few hours. A controversial tweet, posting a clip of a political satire program, The Daily Show, mocking Egyptian President Mohamed Morsy was deleted. The president’s office tweeted in response to the US Embassy, "It’s inappropriate for a diplomatic mission to engage in such negative political propaganda." Official spokesperson for the presidency Ehab Fahmy said on Thursday, however, that the president did not respond on Twitter concerning the video. "The presidency only issues statements to the press," he added. "The official spokesperson for the presidency issued a press statement on Tuesday in which we where we affirmed our respect to media professionals and freedom of opinion.” [Egypt Independent, Ahram Online, AP, 4/4/2013]

Foreign Ministry urges speedy investigations of UAE ‘Brotherhood cell’
The Egyptian Foreign Ministry summoned Ahmed al-Menhali, the Acting Charge d’Affaires of the UAE Embassy in Cairo, to request that investigations into Egyptians detained in connection with a case known as the Muslim Brotherhood cell be sped up, a statement said Wednesday. The statement released by the ministry said that Ali al-Ashry, Egyptian Assistant Foreign Minister for Consular Affairs, asked Menhali to convey to the authorities in UAE Egypt’s demand that investigations are sped up. Ashry also demanded that families of the detainees were made able to visit them, and to facilitate consular care for them by the Egyptian Embassy in Abu Dhabi.
[Egypt Independent, Reuters/Aswat Masriya, 4/3/2013]

Court halts Qadhaf al-Dam extradition
The Administrative Court in Cairo on Wednesday halted the extradition of Ahmed Qadhaf al-Dam, the former coordinator of Egyptian-Libyan relations, to the Libyan authorities. The court said the extradition could be halted, as he is currently detained in Egypt. A case was brought by al-Dam after the Libyan administration demanded he be extradited to Libya for alleged crimes under Gaddafi’s rule. In his suit, al-Dam requested political asylum in Egypt, including being issued an official document recognising what he says is his Egyptian nationality. The Libyan prosecutor’s spokesman, Taha Baara, had told AFP that Tripoli had issued an international arrest warrant for Qaddaf al-Dam for “forging documents.” [Egypt Independent, Ahram Online, DNE, Aswat Masriya, AP, 4/4/2013]