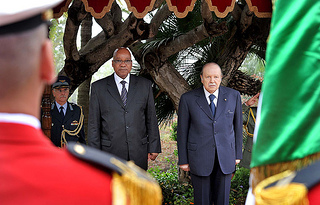 Forty days after Algeria’s president was hospitalized overseas, the country is stuck in limbo with its normally predictable politics thrown into disarray. President Abdelaziz Bouteflika’s absence during a key visit by the Turkish premier has reignited questions over his health and the future of Africa’s largest nation.

Egypt president says calls for early election ‘absurd’
President Mohamed Morsi rejected as "absurd" opposition calls for an early election less than a year into his term of office, in comments published Friday that such calls violated the constitution. [Ahram Online]

Ethiopia to press ahead with Nile dam: Official
Ethiopia will press ahead with the construction of its Grand Renaissance Dam on the Blue Nile River, officials said Thursday, the day after Egypt warned "all options are open" if its water supply is affected. Meanwhile, President Morsi said that Egypt was keen not to risk losing a "single drop of Nile water." [Daily News Egypt, Ahram Online]

Wintershall’s Libya oil output still below pre-war levels
The German oil company Wintershall has been unable to raise its Libyan oil production to pre-civil war levels because of lingering infrastructure problems, and protests could continue to disrupt the country’s exports. Production at the North African country’s major El Feel oilfield was shut down on May 29 as a precaution due to a protest at the site. [Reuters]

Libya must hand former spy chief to Hague court: lawyer
The lawyer for Libya’s former spy chief Abdullah al-Senussi has demanded his surrender to the International Criminal Court (ICC) in The Hague, where he would not face the threat of the death penalty. Senussi, the right-hand man to slain Libyan leader Muammar Qaddafi, is wanted by the ICC on charges of ordering brutal reprisals during the uprising that toppled the Libyan strongman in 2011. [Reuters]

President of Chad warns of Islamist threat in Libya
A volatile Libya poses a growing threat to stability in the Sahara region as Islamist militants who once controlled northern Mali have succeeded in resettling in remote parts of the Libyan desert, Chad President Idriss Déby said Thursday. [Wall Street Journal]

After initial recovery in output, oil prospects dipping
By mid-2012 Libya’s oil production, almost entirely switched off during six months of ferocious fighting, had regained its pre-war level of about 1.5m barrels a day—years earlier than expected. But Libya’s political chaos is spreading to the oil industry as workers and militias now often disrupt production at energy installations, forcing the government to give them money before they will switch valves back on. [Economist]

Union headed by al-Qaradawi urges ‘Day of Rage’ for Syria rebels
A Sunni Muslim union headed by influential cleric Sheikh Yusuf al-Qaradawi on Friday called for a "Day of Rage and Support" for rebels fighting Syrian regime troops backed by a Shia axis. The Association of Muslim Scholars urged its millions of supporters to demonstrate, stage peaceful sit-ins, make speeches, and pray for the Syrian rebels on Friday, June 14. [Naharnet, NOW]

Larayedh leaves for Germany, attends Tunisian-German Economic Forum
Interim Prime Minister Ali Larayedh left on Thursday evening for Germany at the invitation of Chancellor Angela Merkel. The prime minister, accompanied by a delegation of ministers and businessmen, will participate in the Tunisian-German Economic Forum to be held at the seat of the German-Arab Chamber of Industry and Commerce. [All Africa, Tagesshau]

Hardline Islamists control seventy-six mosques, says government
An official with the Ministry of Religious Affairs claims seventy-six mosques are under the control of hardline Islamists in Tunisia. Although appointed by the ministry, a number of hardline religious conservatives have forcibly expelled the government-appointed imams from mosques and replaced them with individuals sharing their religious and political views. [Tunisia Live]

UN special envoy to Yemen deplores lack of consensus on transitional justice law
UN Special Envoy to Yemen Jamal Benomar told reporters on Thursday he deplored National Dialogue Conference (NDC) representatives’ lack of vision when it came to reaching a consensus on Yemen transitional law, one of the key issues of the country’s transition of power. In a visit to Hodeida, Benomar warned that Yemen must find a solution to its transitional justice law dilemma if it had any hope to move forward in creating strong democratic and legitimate institutions. [Yemen Post]

Search still on for South African pair in Yemen
The Department of International Relations and Cooperation says it is not abandoning efforts to find and secure the release of two South Africans held captive in Yemen. Amid fresh media reports that the two are held by al-Qaeda, the department said on Friday that South Africa’s ambassador to Saudi Arabia met daily with Yemeni authorities to locate the couple and facilitate their release. [South African Government News Agency]

Algeria stalled in light of president’s absence
Forty days after Algeria’s president was hospitalized overseas, the country is stuck in limbo with its normally predictable politics thrown into disarray. President Abdelaziz Bouteflika’s absence during a key visit by the Turkish premier has reignited questions over his health and the future of Africa’s largest nation. [AP]