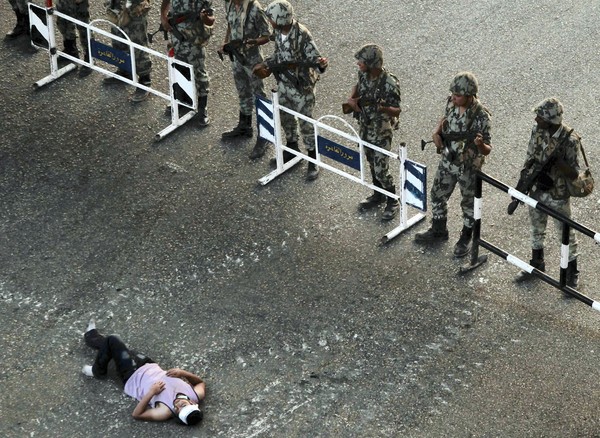 El Badil news website has published the accounts of two reporters who were allegedly abducted and tortured by the army following last week’s clashes in Abbassiya, in which a soldier died and almost 400 people were wounded.

1) El Badil news website has published the accounts of two reporters who it says were abducted and tortured by the army following Abbassiya clashes, in which a soldier died and almost 400 people were wounded. Ahmed Ramadan and Islam Abul Ezz were arrested Friday in Abbasseya while covering the march by anti-military rulers to the Defense Ministry. They said that they were referred to the military prosecution, which ordered their detention 15 days pending investigations, according to Khaled al-Balshy, the website’s chief editor, who wrote their testimony. They said the torture and ill treatment of detainees was supervised by Brigadier General Mamdouh Abul Kheir, a military police leader. [Egypt Independent, English, 5/7/2012]

2) Representatives of several Egyptian political movements met with a parliamentary committee on Sunday to discuss recent violence in Cairo’s Abbasyia district and the fate of scores of political activists subsequently detained by authorities. The meeting follows the arrest of more than 300 activists during clashes with military personnel outside defence ministry headquarters on Friday. parliament will dispatch a delegation to meet with detained activists and press for their referral to a civil – rather than military – court. On Sunday, the People’s Assembly (the lower house of Egypt’s parliament) approved the amendment of Egypt’s military judiciary law. The change will effectively disallow the head of state – whose authorities were assumed by the Supreme Council of the Armed Forces (SCAF) following last year’s revolution – to refer civilians to military tribunals. The amendment, however, has not yet been approved by the SCAF. [Ahram Online, English, 5/7/2012]

3) The Salafi Nour Party demanded of the military junta to “make quick changes in several ministries in order to preserve the security of the country economically and politically in the coming period.” They also rejected the Muslim Brotherhood’s FJP demand that the Ganzouri Government be dismissed. Said Imad Abdul Ghafoor, Chairman of the Nour Party, told Al Masry Al Youm that there are ministries, such as «interior», «foreign», «oil» and «health» “that have proved their failure to end the crisis.” [Al Masry Al Youm, Arabic, 5/7/2012]

4) Another poll on Egyptians’ favorite nominees for the presidential election slated for 23 and 24 May has again put former Arab League chief Amr Moussa on top, with 39 percent of participants’ votes. According to Al-Ahram Center for Political and Strategic Studies’ sixth consecutive poll, former Muslim Brotherhood member Abdel Moneim Abouel Fotouh came second with 24.5 percent of participants’ votes, followed by former Prime Minister Ahmed Shafiq with 17.2 percent. As for Mohamed Morsy, the Brotherhood candidate gained support, climbing to fourth place in this poll with 7 percent of votes. For the first time, he edges past leftist Hamdeen Sabbahi, who acquired 6.7 percent of votes. [Egypt Independent, English, 5/7/2012]

5) Only 60 local NGOs have applied to monitor the presidential election scheduled for 23 and 24 May, according to Egypt’s flagship newspaper, Al-Ahram. This is the smallest number of NGOs requesting to observe elections in recent years. Al-Ahram attributed the decline to the procedures adopted by the government to stop the flow of foreign funds to NGOs. [Egypt Independent, English, 5/7/2012]

6) Egypt’s Supreme Constitutional Court (SCC) on Sunday announced that it would not present its anticipated report on the alleged unconstitutionality of Egypt’s current Parliament for another month. On Sunday, the SCC committee devoted to handling the case listened to arguments in favor of the unconstitutionality of Egypt’s parliamentary elections law, which lawyers say gave candidates running on party-lists an unfair advantage over their independent counterparts in recent parliamentary elections. [Ahram Online, English, 5/7/2012]

7) The slight increase in Egypt’s foreign reserves in April was driven by temporary inflows and is probably not enough to sustain growth, a prominent economist has told Ahram Online. Egypt’s net foreign reserves inched up to $15.21 billion at the end of April, their first climb since December 2010, the country’s central bank announced on its website on Sunday. [Ahram Online, English, 5/6/2012]

8) Iraq has expressed its anger at statements given by the Egyptian ambassador to Qatar in which he described the Foreign Ministry’s decision to move him to serve in Iraq as punishment, BBC Arabic reported. Last week, Mahmoud Fawzy Abu Donia told Qatar-based news network Al Jazeera that the decision to move him was "punishment for him for revealing corruption in the embassy." [Egypt Independent, English, 5/7/2012]

9) Saudi Arabia will implement its financial package to Egypt, said Minister of Planning and International Cooperation Fayza Abul-Naga. Abul-Naga, in statements carried by Saudi Al-Watan newspaper, and Arabic language daily, denied media reports claiming that Saudi Arabia intends to suspend financial aid to Egypt. This month, the Kingdom of Saudi Arabia will pump approximately $1bn in the form of a deposit at the Central Bank of Egypt (CBE), said Abul-Naga stressing that the kingdom has provided a $500 million loan to boost Egypt’s budget during the past period. [Bikya Masr, English, 5/7/2012]