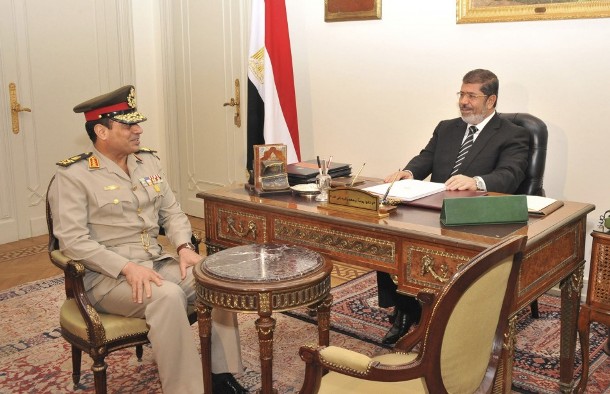 [Ahram Online, 9/4/2012] The Shura Council announced the 27 new members for Egypt’s Human Rights Council on Tuesday. Hossam Ghariani and Abdel-Ghaffar Shukr were appointed as the presiden and vice-presiden to the council respectively. (For list of names see article text.)

[Daily News Egypt, 9/3/2012] General Abd Al-Fatah Al-Sisi, newly-appointed Minister of Defence and Commander-in-Chief of the Armed Forces, confirmed on Monday the composition of the revised Supreme Council of the Armed Forces. The future role of the council still remains unclear. Monday’s announcement solidifies the status of members of a body which, until the arrival of President Mohamed Morsy in June, held the highest level of power in Egyptian politics. (For list of names see article text.)

Governors to be reshuffled, replaced with FJP, Brotherhood figures

[Egypt Independent, Reuters (Arabic), 9/4/2012] A gubernatorial reshuffle is expected over the coming two days, official presidential spokesperson Yasser Ali announced on his Facebook page Monday, with sources from the Freedom and Justice party indicating that senior Brotherhood and party leadership would constitute as many as 11 of the appointees. Last week, a Brotherhood and FJP source said the party put together a report on current governors’ willingness to implement Morsy’s Renaissance Project. A list has been compiled of those governors who have not been sufficiently cooperative in implementing the plan, and those governors will be replaced in the reshuffle, the sources claimed.

[Egypt Independent, 9/1/2012] The administrative court ordered the Interior Ministry Saturday to return former 6th of October City security head Major General Omar al-Faramawy to service. Faramawy had filed a lawsuit against the Interior Ministry in June, demanding his reinstatement and past wages. According to Youm7 newspaper, Faramawy had been sent to retirement after he was accused of being implicated in the killing of peaceful protesters during the early days of the revolution, along with former President Hosni Mubarak, former Interior Minister Habib al-Adly and six senior security aids.

US nearing deal for $1 billion in Egypt debt relief

[Egypt Independent, Ahram Online, Al Masry Al Youm, 9/4/2012] The Obama administration is close to a deal with Egypt’s new government for US$1 billion in debt relief, a senior US official said on Monday, as Washington seeks to help Cairo shore up its ailing economy in the aftermath of its pro-democracy uprising. Progress on the aid package, which had languished during Egypt’s 18 months of political turmoil, appears to reflect a cautious easing of US suspicions about Morsy and a desire to show economic goodwill to help keep the longstanding US-Egyptian partnership from deteriorating further. Egypt’s Prime Minister, however, said on Tuesday that his government had not been officially consulted about a $1 billion debt relief agreement with the US, the state-run Al-Ahram newspaper reported.

[Ahram Online, Al Rassd (Arabic), 9/4/2012] The Egyptian pound inched lower on Monday to its weakest in more than seven and a half years after the central bank released data on the country’s foreign reserves which some economists said showed an underlying weakness. The pound ended at a weighted average of 6.1015 to the U.S. dollar on Monday, its lowest since 30 December, 2004. On Sunday it was last bid at 6.097. Dr. Hisham Qandil – the Prime Minister – said that the IMF did not condition its aid package to Egypt valued at $ 4.8 billion on the devaluation of the pound.

[Egypt Independent, 9/2/2012] The Interior Ministry is coordinating with the Justice Ministry to prepare a draft law with harsher penalties for crimes against houses of worship, “thuggery,” smuggling subsidized goods, blocking roads, stealing electricity, assaults on the freedom to work, and sabotaging installations, according to a security source.The source told state-run news agency MENA that the bill aims to stop criminals and help police restore security.

[Egypt Independent, Al Masry Al Youm (Arabic), 9/2/2012] El Sawy Culture Wheel, a cultural center in Zamalek, is hosting Satanists, according to a complaint filed by a Freedom and Justice Party lawyer with the Interior Ministry. The interior minister has assigned security authorities to investigate the matter. Ismail al-Weshahy, the FJP lawyer, said some of his clients went to the center on Saturday to cover an event and saw people wearing T-shirts printed with Satanic images, as well as necklaces and other accessories which made them suspicious.

[Egypt Independent, 9/2/2012] Bassam al-Zarqa, one of the advisors to President Mohamed Morsy, said the Egyptian people have "an overwhelming desire to implement Islamic Sharia, and not only its principles." Zarqa, who is the secretary of the Salafi Nour Party in Alexandria and a member of the constitution-writing assembly, told London-based Asharq Al-Awsat that while the majority of Egyptians want Islamic Sharia implemented, Article 2 of the Constitution states that only the principles of Sharia represent the main source of legislation. Zarqa said that he was picked as an advisor to follow up on the political issues related to investment.

[Egypt Independent, Al Arab Online (Arabic), 9/3/2012] Syrian Information Minister Imran Zoubi attacked Egyptian President Mohamed Morsy for his recent speech at the Non-Aligned Movement summit in Tehran, the German news agency DPA reported. In Tehran, Morsy’s speech dealt with the Syrian and Palestinian people’s struggle for freedom. In a press conference held in Damascus Monday, Zoubi described Morsy’s speech as “political hypocrisy” and “an additional attempt to belittle Egypt.” Zoubi expressed his regret that “after Mubarak left, another president came and his only difference from Mubarak is the beard.”