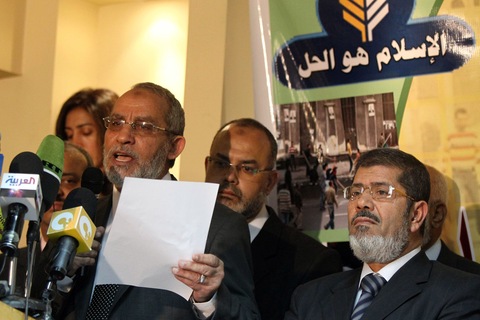 Sources close to the Brotherhood report that the group is likely to back either former Information Minister Mansour Hassan or Islamist candidate Mohamed Selim al-Awa for the presidency.

1) Egypt’s government will finish writing a new draft law regulating NGOs within a month, according to a legal adviser to the Insurance and Social Affairs Ministry. The ministry plans to discuss the draft legislation terms with all civil society organizations, before submitting a bill to the cabinet and then Parliament. [al-Masry al-Youm, English, 3/7/2012]

2) Shura Council MPs harshly blamed the cabinet and SCAF for allowing indicted NGO employees to leave the country. Shura members described the lifting of the travel ban as “an infringement on Egypt’s sovereignty and the independence of its judiciary, in addition to a violation of Egyptians’ dignity” and summoned Ministers of International Cooperation Fayza Aboul Naga, of Civil Aviation Hussein Massoud and of Insurance and Social Affairs Nagwa Hussein Ahmed Khalil for questioning. [The Daily News Egypt, 3/6/2012]

3) Sources close to the Brotherhood report that the group is likely to back either former Information Minister Mansour Hassan or Islamist candidate Mohamed Selim al-Awa for the presidency. [al-Shorouk, Arabic, 3/7/2012]

4) Sources within the Wafd Party’s Executive Bureau reported that the party is close to endorsing the presidential candidacy of Amr Moussa. [al-Dostor, Arabic, 3/7/2012]

6) Former Brotherhood member Abdel Moneim Aboul Fotouh pledged that if he wins office, half his cabinet officials will be under age 45. Fotouh emphasized that he has no political affiliation and will run as an independent. [al-Masry al-Youm, English, 3/7/2012]

7) A deal to merge the Egyptian Social Democratic Party and the Adl Party is “nearing completion,” according to Tamer al-Meehy, a member of the Social Democratic Party’s supreme committee. Ahmed Shoukry, president of the Adl Party, said he hopes the deal will build a bridge between center-left and center-right political groups that split the vote in parliamentary elections and left both parties with fewer seats than expected. [al-Masry al-Youm, English, 3/6/2012]

8) March 8 is the deadline for parties, individuals, and trade unions to submit proposals for procedures governing the selection of the 100-member constituent assembly that will draft Egypt’s new constitution. The parliament’s General Secretariat has received 55 different proposals for determining the allocation of seats on the committee. [al-Shorouk, Arabic, 3/7/2012]

9) Parliamentary Speaker Saad al-Katatny has proposed a timeline for the formation of a constituent assembly, saying that the 678 elected members of both houses of parliament will vote and decide on the members of the committee in a joint session on March 24.  Prior to that session, the FJP will propose forming a 30-member committee to devise a mechanism for selection the 100 members of the assembly, and the procedures will be subject to a vote of both houses on March 17. The FJP is expected to nominate al-Katatny himself for chairmanship of the committee. [Washington Post, English, 3/4/2012] [al-Masry al-Youm, English, 3/5/2012]

10) Liberals and Islamists are far from reaching a consensus on criteria for membership in the 100-member constituent assembly, or even the mechanisms that will govern the drafting process. Islamists would like to see a significant proportion – between 40 percent (the FJP proposal) and 60 percent (the Salafi proposal) – of the committee’s seats reserved for MPs, which would grant Islamists significant influence over the constitutional process. However, liberal and secular political forces argue that such a high threshold for MPs would marginalize women and religious minorities, who are underrepresented in parliament. On March 6, forty political movements condemned the “monopolization of certain political powers” in parliament over choosing members of the assembly. Meanwhile, the National Association for Change is arguing that the interim constitution issued by the SCAF in 2011 bars MPs from membership in the committee. Liberal MP Amr Hamzawy has put forward a proposal lowering the threshold for MPs on the committee to 35 percent.  Coptic Christian figures, who have already voiced concern about the marginalization of religious minorities by an Islamist-majority parliament, are meeting this week to discuss Coptic representation on the committee. [al-Masry al-Youm, English, 3/5/2012] [al-Masry al-Youm, Arabic, 3/5/2012] [al-Shorouk, Arabic, 3/7/2012]