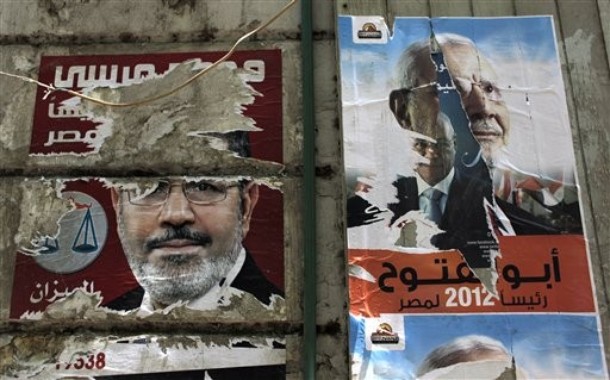 Official Brotherhood spokesperson Mahmoud Ghozlan published a 6 May op-ed entitled ‘A Message to our Brothers in the Salafist Call’ on the Muslim Brotherhood official website, blaming Salafists for endorsing Abul-Fotouh. Ghozlan’s attack targets the wider base of conservative Salafist voters who do not agree with Abul-Fotouh’s views.

The Presidential Elections Commission closed the door Tuesday for presidential hopefuls to pull out of the race, as none of them submitted a request to withdraw. That makes the list of 13 candidates announced by the commission on 26 April final.

The High Administrative Court declared late Tuesday that the Supreme Presidential Electoral Commission (SPEC) has no legal right to refer the Disenfranchisement Law, which puts a 10-year ban on those who were recently part of Mubarak’s government from holding political office, to the Constitutional Court. According to the Administrative Court’s statement, the mandate of SPEC, the body tasked with managing the elections process, does not include the power to question the constitutionality of legislation. If the Administrative Court’s decision is accepted, this could mean that the legislation, which would see Mubarak top officials such as former prime minister Ahmed Shafiq forbidden from running for president, is enforced.

The rivalry between the Muslim Brotherhood and its candidate for presidency Mohamed Mursi, and the organisation’s former leading member and popular presidential candidate Abdel-Moneim Abul-Fotouh has reached new heights, as the two sides start to attack each other directly in the media. Official Brotherhood spokesperson Mahmoud Ghozlan published a 6 May op-ed entitled ‘A Message to our Brothers in the Salafist Call’ on the Muslim Brotherhood official website (www.ikhwanonline.com), blaming Salafists for endorsing Abul-Fotouh. Ghozlan’s attack targets the wider base of conservative Salafist voters who do not agree with Abul-Fotouh’s views. On Al-Nahar channel, Abul-Fotouh promised the citizens of Egypt that he would order the Brotherhood to declare its financial sources and to register itself as a religious group not as a political group.

The Union of Revolution Youth has called for an immediate investigation into rumors that security authorities threatened to conduct virginity tests on women arrested during the Abbasseya clashes. A volunteer paramedic who was treating injured protesters in Abbasseya on Friday alleged that soldiers threatened to conduct virginity tests on two nurses who were working with him at the field hospital. In an interview on ONTV satellite channel, Islamist presidential candidate Mohamed Selim al-Awa called virginity tests a crime.

Dozens of Al-Ahly football club fans known as ultras gathered in front of the Police Academy Wednesday for the trial of 75 suspects accused of attacking and killing dozens following a February match in Port Said. During the most recent session, the court also ruled that the interior minister, head of the National Sports Council, head of Masry club and head of the National Football Association would be included as defendants in the civil lawsuits filed by relatives of those killed and injured in the violence.

The proposed budget for 2012/13 – already over a month late – will be presented for parliamentary approval within days; some experts are predicting wide-ranging reforms. The law stipulates that the executive power must hand the draft budget to parliament 90 days before the beginning of the financial year on 1 July – meaning it was due by 1 April. A source inside the Ministry of Finance, speaking on condition of anonymity, said the political situation and the complex relationship between parliament and the ruling military was behind the delay. The Egyptian Centre for Economic Studies (ECES), speculated that the delay might be due to negotiations with the International Monetary Fund (IMF) over specific items in the budget.

The Hamas-led government in Gaza has accused Egyptian authorities of hampering the delivery of fuel carried by a Qatari tanker bound for Gaza. A government source in Gaza said Tuesday that intensive communications are currently being held with Egyptian officials to allow for swifter delivery of the fuel, which has been held up for 10 days.