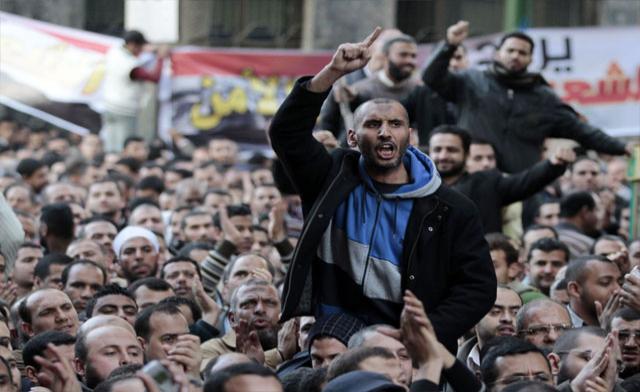 Members of the FJP-led Democratic Alliance won in votes for all but two of the committees in the People’s Assembly, led by speaker Saad al-Katatny. Senior Brotherhood leader Essam Al Erian became chairman of the Foreign Relations Committee, and chairmanship of the Defence and National Security Committee went to Abbas Mokheimar, a Brotherhood member with a military background.

1) Several thousand protesters marched to the People’s Assembly building on January 31 where they accused the Muslim Brotherhood of forming an alliance with the SCAF and chanted, “The people want the fall of the Brotherhood.”  Hundreds of Brotherhood members forming “human shields” prevented the protesters from advancing and claimed that anti-revolution gangs were threatening to destroy the parliamentary headquarters. Brotherhood MP Mohamed al-Beltagy met with coalition representatives and youth activists on February 1 in an attempt to diffuse the confrontation. [al-Ahram, English, 2/1/2012] [The Daily News Egypt, English, 1/31/2012] [al-Shorouk, Arabic, 2/1/2012]

2) Parliamentary Speaker Saad al-Katatny announced the formation of a parliamentary committee to receive complaints and assess the demands of protesters outside of the People’s Assembly building. [al-Youm al-Saba’a, Arabic, 2/1/2012]

3) 39 political parties and movements have called for a sit-in outside of the parliament on February 9 to demand justice for the victims of the revolution and call for the presidential nominations period to open on February 11. Participants include April 6, the Revolutionary Youth Union, the Revolutionary Youth Coalition, Kazeboon, the Popular Movement for the Independence of Al-Azhar, the liberal Egypt Freedom Party (founded by MP Amr Hamzawy), the moderate-Islamist Wasat Party, and the Islamist Egyptian Current Party. [al-Ahram, English, 2/1/2012]

4) After the SCAF-appointed Advisory Council recommended that the military move up the date of the presidential election to May, members of the Advisory Council reported that the SCAF has rejected the proposal and will stick to the current timeline with elections promised by the end of June. [al-Masry al-Youm, Arabic, 2/1/2012] [al-Ahram, English, 1/31/2012]

5) The National Association for Change (NAC) announced a new initiative calling for the election of an interim president – who would only serve for a one-year term –within two months of February 11. The NAC initiative also calls for the dismantling of the Shura Council and the cancellation of ongoing Shura polls with the aim of speeding up the transitional phase. [al-Ahram, English, 2/1/2012]

6) Members of the FJP-led Democratic Alliance won in votes for all but two of the committees in the People’s Assembly, led by speaker Saad al-Katatny. Senior Brotherhood leader Essam Al Erian became chairman of the Foreign Relations Committee, and chairmanship of the Defence and National Security Committee went to Abbas Mokheimar, a Brotherhood member with a military background. Committees of planning, industry, economy, manpower, Arab affairs, housing, culture, transport, human rights, health, legislation, education, complaints and religious affairs are now headed by MPs either directly affiliated to the Muslim Brotherhood or belonging to parties in the Democratic Alliance. [Gulf News, English, 2/1/2012]

7) MPs representing the Egyptian Social Democratic Party and the "Revolution Continues" coalition, along with several independent MPs, walked out of the parliamentary session on January 31 to protest a perceived bias on the part of Speaker Saad al-Katatni regarding the latter’s choice of speakers during the assembly’s eighth and ninth sessions. [al-Ahram, English, 2/1/2012]

8) Presidential candidate Amr Moussa met with Parliamentary Speaker Saad al-Katatny to congratulate him on his new position and called for consensus-building. Moussa said that Egypt’s next president will bear responsibility for forging an understanding between Egypt’s political forces to rebuild the country. [al-Masry al-Youm, Arabic, 2/1/2012]

9) Justice Minister Adel Abdelhamid Abdallah announced that he has sent back a letter from U.S. Ambassador Anne Patterson that asked for an end to a travel ban on Americans being investigated for alleged illegal funding of pro-democracy groups. [Reuters, English, 2/1/2012]

10) Saad al-Katatni, speaker of the People’s Assembly, met with Ambassador Anne Patterson on February 1. On Tuesday, several parliamentarians – including independent MP Mostafa Bakry – slammed the US ambassador for allegedly sending a letter directly to the residence of Justice Minister Adel Abdel Hamid regarding recent raids by judicial authorities on certain local NGOs and the subsequent detention of a handful of American employees of those NGOs.

11) Egypt plans to offer 13 billion Egyptian pounds ($2.2 billion) in treasury bills and bonds over the next week after receiving aid commitments from the European Union and World Bank. Egypt raised 4.55 billion pounds at debt auctions in the past week, or 30 percent of its goal. [Bloomberg, English, 2/1/2012]