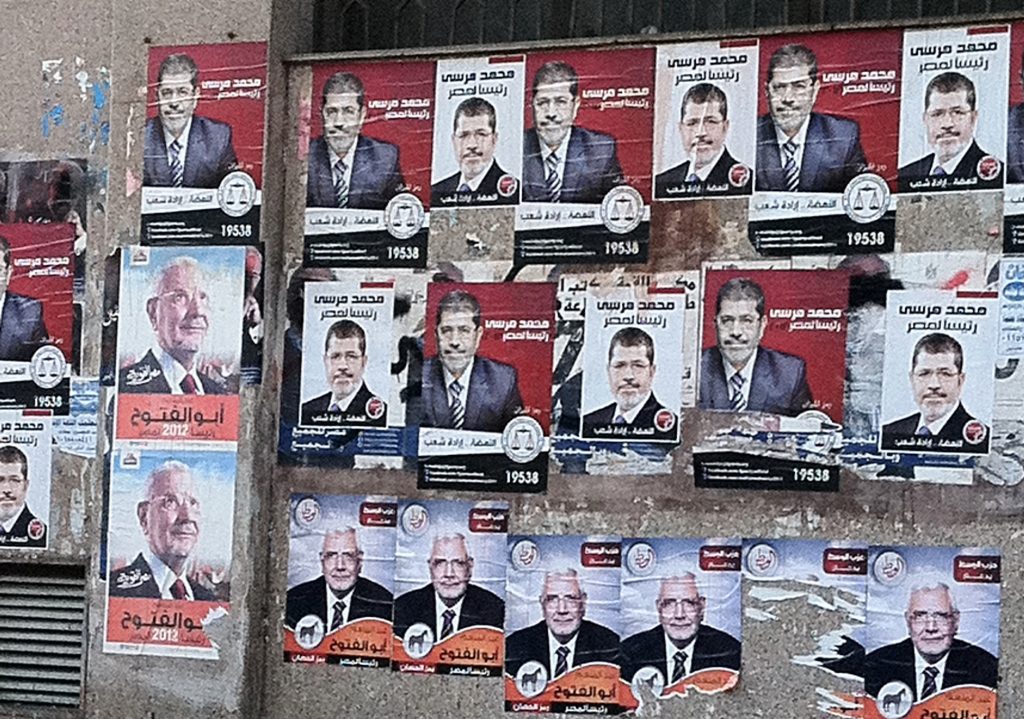 Brotherhood supporters seem unfazed by surveys that show their unfancied contender trailing rivals who entered the race earlier and are spending heavily in the dash for votes. To prove its electoral clout, the Brotherhood organized what it said was a 760 km (470 mile) human chain of supporters across Egypt on Thursday.

Jimmy Carter, former US president and head of the Carter Center and US Congressman David Dreier arrived on Sunday along with a Congress delegation, as well as observers from African Union to observe Egypt’s upcoming presidential elections. Carter is scheduled to hold several meetings with government officials and political figures prior to the election. The Carter Center has distributed 14,000 judges across 352 main polling stations and 13,000 sub-polling stations. It has reportedly received requests from 923 foreign reporters to cover the historic event. Earlier on Monday, SPEC approved 53 NGO licenses to observe Egypt’s first post-Mubarak presidential elections. Ismail Khairat, head of Egypt State Information Service, stated that there will be an international press conference at Cairo International Media Centre in cooperation with the communications ministry to facilitate the coverage of 329 foreign reporters in the electoral process.

Egypt’s Brotherhood goes all out for presidency [Reuters, English, 5/20/2012]

On the last day of official campaigning, the Brotherhood told Egyptians to "book your place anywhere in Egypt" for evening rallies in support of its candidate Mohamed Mursi. Brotherhood supporters seem unfazed by surveys that show their unfancied contender trailing rivals who entered the race earlier and are spending heavily in the dash for votes. To prove its electoral clout, the Brotherhood organized what it said was a 760 km (470 mile) human chain of supporters across Egypt on Thursday. Sunday’s planned rallies, including one outside a presidential palace in the heart of downtown Cairo, were intended as a spectacular climax to its campaign. But the headwinds for the Brotherhood seem stronger than before the parliamentary election, when its long struggle against a monolithic Mubarak establishment finally paid off.

With only two days to go before Egypt’s first post-Mubarak presidential election on Wednesday and Thursday, the ruling Supreme Council of the Armed Forces (SCAF) appears set to issue an interim constitution. The move comes after parliament failed to form a constituent assembly mandated with writing Egypt’s first post-revolution national charter. The proposed interim constitution will reportedly grant Egypt’s newly elected president the right to dissolve parliament and appoint the prosecutor-general, along with Al-Azhar’s grand imam and grand Mufti. The proposed interim constitution also reportedly stipulates that the state shall represent the only body authorized to form and maintain the armed forces, stressing that the role of Egypt’s military is to safeguard national security, maintain national unity and protect the constitution and the revolution’s legitimacy. In addition, the interim constitution will reportedly grant the SCAF absolute powers to discuss and review the military’s internal affairs, including its budget, armaments and military law. The budget can be discussed by parliament’s defense and national security committee, according to the provisional constitution, but only in secret closed-door meetings.

MP Yasser al-Qady has submitted a parliamentary motion calling on the prime minister and the ministers of interior and endowments to halt what he called a "Shia tide" in Egypt and an abuse of the freedom acquired after the 25 January uprising. He said the security service has failed to to do this, and that Al-Azhar also failed to combat attempts to spread Shia beliefs in Egypt at both theoretical and practical levels after Shia scholar Ali al-Kurani’s recent visit to Egypt. Qady called for the implementation of Article 10 of Law 20/1936, which allows the Cabinet to confiscate publications that discuss religion in a way that could undermine public security.

Egypt’s economy grew by 5.2 per cent in the first quarter of the 2012 calendar year, the country’s minister of planning said on Monday. Egypt’s gross domestic product (GDP), hit by turmoil since a popular uprising toppled President Mubarak in 2011, shrunk by 4.3 per cent compared to the same period a year earlier. Abul-Naga also announced in a news conference on Monday that Egypt has agreed to sell $500 million treasury bonds to Saudi Arabia.

Egypt’s official jobless rate is contining to rise, hitting 12.6 per cent in the first quarter of 2012, state data showed on Monday. Figures from the Central Agency for Public Mobilization and Statistics (CAPMAS) show 3.4 million unemployed people in Egypt at the end of March 2012, 62,000 more than in the fourth quarter of the previous year. Egypt’s official employment statistics have long been criticised as an inaccurate reflection of the country’s economic reality. Experts cited in 2011 by the Global Policy Network, an independent research group, said Egyptian employment could be 17 per cent if not much higher.