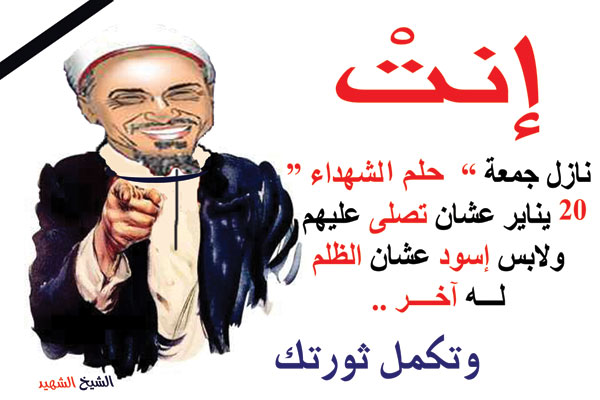 The Brotherhood’s Freedom and Justice Party has decided to support keeping the caretaker prime minister and cabinet appointed by the ruling military council in office for the next six months.

1) The SCAF has declared January 25 a national holiday and the military plans to organize a major 3-part celebration of the revolution. SCAF member Major General Ismail Etman claimed that one third of Egypt’s military are revolutionary youth and said that youth are working with the Culture Ministry to organize a “popular artistic” celebration in Tahrir Square. The second celebration will be an official military celebration and the third will be a concert aimed at easing sectarian tensions. The April 6 Youth Movement announced that its members will rally in Tahrir Square on January 25 to “complete” rather than celebrate the Revolution’s goals. [al-Youm al-Saba’a, Arabic, 1/11/2012] [al-Masry al-Youm, English, 1/11/2012]

2) Two revolutionary youth groups, the Free Front for Peaceful Change and the Youth Movement for Justice and Freedom are distributing posters calling for a national day of mourning on Friday, January 20 to honor “the dream of the martyrs” followed by a major march on Tahrir Square on January 21. [al-Dostor, Arabic, 1/11/2012]

3) Egypt’s Central Statistics agency reported an average voter turnout of 60 percent over the course of the three rounds of voting for the People’s Assembly. [al-Shorouk, Arabic, 1/12/2012]

4) With the presidential election expected in June 2012, a new presidential candidate with a military background has declared his candidacy. Hossam Khairallah, former assistant chairman of Egypt’s General Intelligence Services, publicly announced his campaign bid last week, prompting speculation that the SCAF is backing his candidacy. Khairallah neither denied nor affirmed these accusations in a press conference but stated that Egypt needs a president with a military background. [al-Masry al-Youm, English, 1/10/2012]

5) The Muslim Brotherhood issued a statement on January 10 denying claims that it made a deal with the SCAF. Egyptian media recently reported that the Brotherhood’s Freedom and Justice Party (FJP) had made a deal with the SCAF after a leading Brotherhood figure issued a statement saying it may consider the possibility of granting the SCAF immunity from prosecution. “The Brotherhood declares its total rejection of any such deals and stresses … that no deals were made except between God and the people,” according to the latest statement by Supreme Guide Mohamed Badie. [al-Masry al-Youm, English, 1/10/2012]

6) The Brotherhood’s Freedom and Justice Party has decided to support keeping the caretaker prime minister and cabinet appointed by the ruling military council in office for the next six months, according to a January 8 interview with Essam el-Erian. Party leaders had previously suggested that they might insist on the right of parliament to form a new cabinet, possibly as early as the first session of the People’s Assembly on January 23. The shift to a more conciliatory stance suggests that the Brotherhood is distancing itself from more hardline Salafi Islamists and seeking to avoid a confrontation with the military. [New York Times, English, 1/11/2012]

7) The SCAF continues to call for drafting a new constitution before presidential elections expected in June 2012, now actively lobbying political parties to support the “constitution first” initiative. “Consensus has to be reached between political forces on the issue of drafting the new constitution before holding presidential elections. It is not a sound resolution to elect a president without a constitution to define his powers,” said SCAF spokesman Mohamed El-Kholy, adding that the SCAF has contacted the FJP, the Salafi Nour Part, the Wafd Party and the Free Egyptians Party to ask for their support on the “constitution first” sequence. [al-Ahram, English, 1/11/2012]

8) The Muslim Brotherhood appears to have reversed its stance on the timing of Egypt’s next constitution.  After previously advocating a “constitution first” position on the transitional sequence, the Brotherhood is now urging the SCAF to hold presidential elections at the same time as the formation of the constitutional assembly that will draft Egypt’s new charter. This would mean that a new president will be elected before the constitution is ratified. [al-Masry al-Youm, English, 1/11/2012]

9) Al-Azhar Grand Sheikh Ahmed al-Tayyeb announced a new draft declaration of rights and freedoms, interpreted as an attempt to curb Islamic fundamentalism in the new Egypt. The declaration calls for criminalizing discrimination, marginalization, and denunciations of apostasy; as well as the support of freedom of artistic expression, with consideration for religious values; and the prevention of Islamic "morality police" or "religious vigilantes." The April 6 Youth Movement welcomed the Azhar declaration as a “positive step” toward achieving national unity and said its members will return to Tahrir Square on January 25 to “complete” rather than celebrate the Revolution’s goals.  [al-Masry al-Youm, English, 1/11/2012] [al-Youm al-Saba’a, Arabic, 1/11/2012]

11) US Deputy Secretary of State William Burns “will meet leaders of the (Brotherhood’s) Freedom and Justice Party at their headquarters in Cairo,” on January 11, according to FJP spokesman Ahmed Sobea, in the party’s highest-level meeting with a U.S. government official since its formation. Burns, who arrived in Cairo on January 10, has already met with Field Marshal Tantawi. [AFP, English, 12/11/2012]

12) Egypt will resume negotiations with the IMF next week for a $3 billion loan it rejected last June, according to Trade Minister Gouda Abdel Khaleq. Foreign-currency reserves have decreased by half to about $18.1 billion in December, leaving Egypt only enough to cover two to three months of imports. Egypt may have already missed its opportunity to secure the IMF’s original offer, which came with few conditions for reform and a favorable rate of about 1.5 percent. The IMF might insist on more conditions when talks resume next week. [WSJ, English, 1/11/2012]