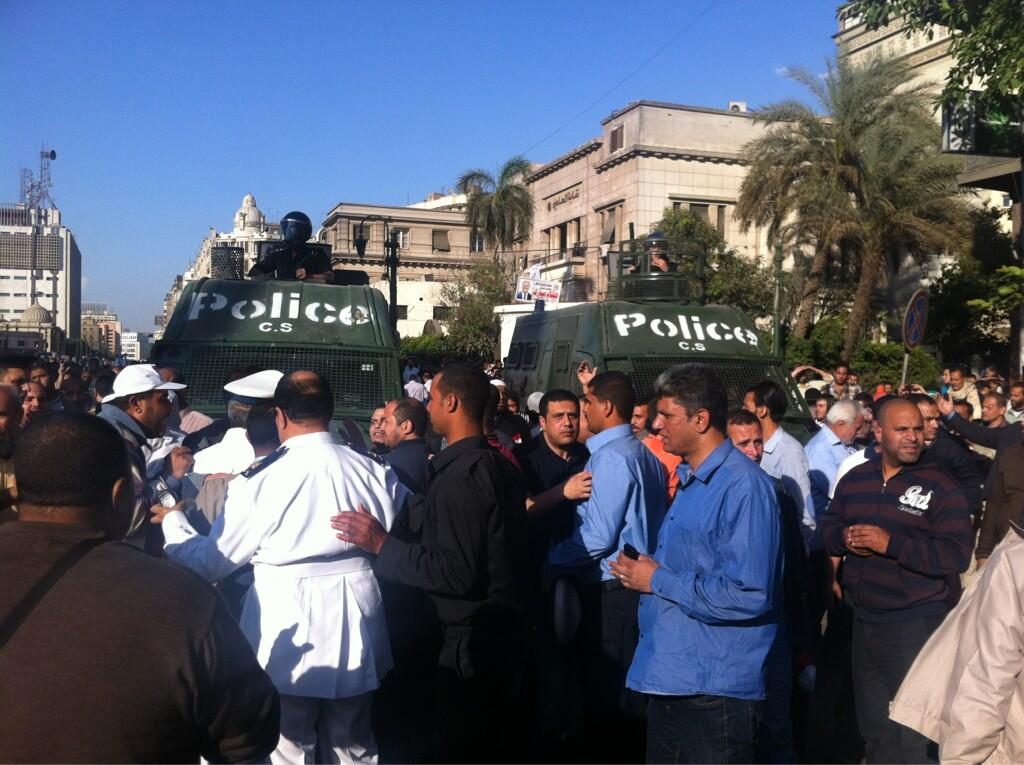 Thousands of Muslim Brotherhood members gathered outside the High Court on Friday to demand the purging of the judiciary and the dismissal of Justice Minister Ahmed Mekky. The protest was organized in response to a court’s ruling this week to release former President Hosni Mubarak from prison pending his retrial on charges of complicity in killing protesters during the January 2011 uprising.

Opposition figure says will support independence of judiciary
Hamdeen Sabahi, founder of the Popular Current, has condemned calls for protests on Friday to demand what they called "the cleansing of the judiciary". Sabahi emphasised the necessity of supporting the judiciary’s independence. "We will support the independence of the judiciary against encroachment by executive power," the former presidential candidate wrote on Twitter. Some Islamist and liberal parties including the Nour Party, the ‘Strong Egypt’ Party, and the Dostour Party had opposed the calls for today’s demonstrations. [Aswat Masriya, 4/19/2013]

Justice ministry blasts planned Friday rally for ‘purge’ of Egypt judiciary
Justice Ministry spokesman Ahmed Rushdy on Thursday slammed recent calls by political parties and groups – including the Muslim Brotherhood – to hold a Friday rally outside the High Court in downtown Cairo to demand the purge of Egypt’s judiciary. In a press release, Rushdy stressed the ministry’s rejection of the planned protest, calling it "a form of aggression against judicial authority… Judicial independence doesn’t only mean stopping the executive authority from pressuring the judiciary; it also includes defending the judiciary from public pressure and the influence of political groups," read the ministry statement. [Ahram Online, 4/18/2013]

Former prosecutor general appeals court ruling reinstating him
Former Prosecutor General Abdel Meguid Mahmoud has appealed a 27 March ruling by the Court of Appeals that ordered his reinstatement, and invalidated the appointment of current top prosecutor Talaat Abdallah. Mahmoud said that although the ruling is in his favor, he is appealing it because it did not explicitly annul the president’s 22 November Constitutional Declaration and the amendments made to that decree on 8 December 2012. [Egypt Independent, Ahram Online, 4/18/2013]

Court upholds sentence for Salafi preacher on defamation charges
The year-long prison sentence handed down to Salafi preacher Abdallah Badr, who was found guilty of defaming actress Elham Shahin, was upheld by the Al-Zawya al-Hamra Misdemeanor Court on Thursday. The court also fined the preacher LE5,000 and set an LE2,000 bail. Badr had called Shahin a “whore” in a television program, and said he “wondered how many men she slept with.” Shahin’s lawyer, Yousry Abdel Razk, requested that Sharia be applied in this case, which punishes the unfounded defamation of women with 80 lashings. [Egypt Independent, DNE, 4/18/2013]

IMF chief says back to drawing board, Minister denies need for approval of IMF loan
The International Monetary Fund said on Thursday it has not reached a deal with Egypt regarding a loan program, adding that much more work needs to be done on the matter. Egypt’s decision last year to change course regarding planned changes to economic policy had set back progress with the IMF on loan deal talks, IMF chief Christine Lagarde said in a news conference. Lagarde said that she hoped a deal would be sealed to help cash-strapped Egypt with its ongoing balance-of-payments crisis. Planning Minister Ashraf El-Arabi government does not need the approval of the Shura Council (the upper house of Egypt’s parliament, currently endowed with legislative powers) to accept the loan but critics noted that a condition for the loan is that the Egyptian government achieve "political consensus." [Reuters/Egypt Independent, Ahram Online, 4/18/2013]

Egypt’s foreign debt reaches $38.8 billion at end of 2012
Egypt’s foreign debt reached $38.8 billion by the end of 2012, a Central Bank of Egypt report said on Thursday. Foreign exchanges rates account for the rise in the amount of the country’s foreign debt, the Middle East News Agency stated. Domestic debt rose to $1.38 trillion by the end of December 2012, the report said. Foreign direct investments (FDI), meanwhile, rose by a whopping 78.8 percent quarter-on-quarter to record $193.3 million in the October-December period of 2012/13. [Aswat Masriya, Ahram Online, 4/18/2013]

Curfew declared in Assiut after police station clashes
Security forces in Assiut imposed curfew late Thursday night for the area encompassing the four main roads leading to the Abanoub Police Station following attacks on the building by relatives of a suspect arrested on charges of arms possession. One of the suspect’s relatives, Mohamed Salah Attiya, was reportedly shot dead by police during Thursday’s confrontations. The state-run Al-Gomhurriya newspaper reported that the victim was killed when police shot into the crowd to disperse the protesters. Attiya’s death sparked more anger among the family, leading the police to fire tear gas. [Egypt Independent, Ahram Online, 4/19/2013]

Brothers gather at High Court, demand ‘purging of the judiciary’
Thousands of Muslim Brotherhood members gathered outside the High Court on Friday to demand the purging of the judiciary and the dismissal of Justice Minister Ahmed Mekky. The protest was organized in response to a court’s ruling this week to release former President Hosni Mubarak from prison pending his retrial on charges of complicity in killing protesters during the January 2011 uprising. Mubarak was released on the grounds that his period of provisional detention has expired. A big banner has been hung on one of the court’s gates, which reads "the people demand," listing the goals of the protest underneath it. Vendors are also selling the flags of Egypt and Muslim Brotherhood. Chants against “thieves” and “seculars” were also heard. [Egypt Independent, Ahram Online, AP, Aswat Masriya, DNE, 4/19/2013]

Egypt’s monks join new Christian assertiveness in face of Islamist power
At the foot of the mountain, the monks at the St. Anthony’s Monastery bearing his name continue the ascetic tradition. But even this remote spot is touched by the turbulent times facing Egypt’s Christians, who fear for their future under the rising power of Islamists. Monks normally immersed in spirituality are joining the increasingly assertive tone of many in the minority community, vowing Christian voices won’t be silenced. Their tone reflects the growing activist political role of the Coptic Orthodox Church, which for decades had adopted a quietist policy, avoided rocking the boat and relied on backroom dealings with the country’s leadership to try to preserve the community’s rights. [AP, 4/19/2013]

Egypt army plays ‘significant role’ in ensuring domestic stability: Kerry
US Secretary of State John Kerry said the Egyptian military "played a significant role in ensuring stability in Egypt" and without it, the country would have "subsided into a civil war." Kerry made his comments during a congressional hearing on Thursday, where the 2014 budget of the US Department of State was discussed, Egyptian state news agency MENA reported. Responding to a question directed at him concerning US aid to Egypt, he stated: "The Egyptian armed forces does not only ensure the security of Egypt but has also achieved what it promised – relinquishing power and handing it over to those who succeeded in the [June 2012] presidential elections." [Ahram Online, 4/18/2013]

Morsi: We look forward to Russia’s support during transitional stage
In a press statement to Etartas Russian News Agency, President Mohamed Morsi said that Egypt look forward to Russia’s support during the transitional period that followed the 25th January revolution. The president said that Egypt seeks constructive relations with all countries, including Russia, which he termed as "old honest friend". Morsi said that Egypt and Russia have immense capabilities to expand the scope of bilateral cooperation, including the development of the infrastructure of the Suez Canal and Red Sea coast. Morsi noted that the Egyptian side seeks increasing the volume of trade exchange, tourism, and transfer of technology, but also wanted to create a real political alliance. [SIS, 4/19/2013]