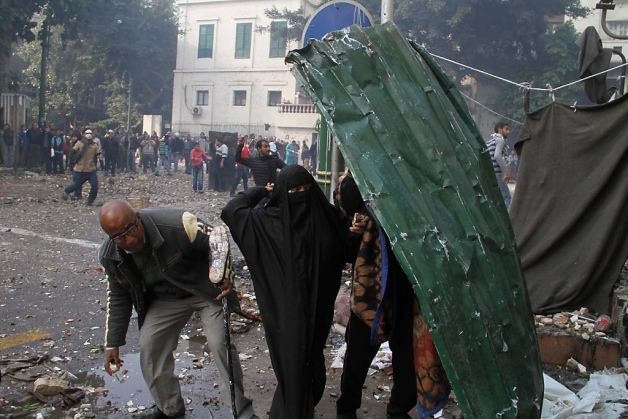 Egyptian Prosecutor-General Abdel-Maguid Mahmoud on Monday finalised the list of political detainees to be given amnesties on orders of Egyptian President Mohamed Morsi, according to a spokesman for the prosecutor-general’s office.

Cabinet protesters excluded from president’s prisoner amnesty
Egyptian Prosecutor-General Abdel-Maguid Mahmoud on Monday finalised the list of political detainees to be given amnesties on orders of Egyptian President Mohamed Morsi, according to a spokesman for the prosecutor-general’s office. The list includes those arrested in protests since the outset of last year’s Tahrir Square uprising until June of this year. The list, however, does not include 269 protesters who still face charges of vandalising Cairo’s Scientific Institute (located next to Cabinet headquarters in downtown Cairo) and assaulting military and police personnel during clashes that took place in the capital last December. [Ahram Online, Egypt Independent, 11/5/2012]

Members of parliament to demonstrate on 14 November
Members of parliament will hold a demonstration against the decision by the Supreme Constitutional Court to dissolve the People’s Assembly. The demonstration will take place on 14 November in front of the State Council. It is planned in conjunction with the council’s consideration of a lawsuit raised against the Supreme Constitutional Court on this issue. The demonstration was called for by Mohamed El-Omda, ex-member of People’s Assembly, who said the Freedom and Justice party, Al-Nour party and the Arabic Egyptian Socialist Party will participate. [DNE, al-Watan (Arabic) 11/5/2012]

Revised shop curfew law revealed
The Prime Minister Hisham Qandil has unveiled the latest schedule for closing times for shops, set to take effect in December. According to Sunday’s statement, Qandil managed to reach a compromise with the chairman of the Federation of the Chambers of Commerce (FECC), as well as several members and heads of the Chambers of Commerce. The new law will be applied gradually from December and is expected to be fully implemented by the end of April 2013. The government has said this law is meant as an energy saving measure and placing a curfew on shops will help reduce the cost and burden on the strained power. [DNE, 11/5/2012]

Brotherhood scrambles for consensus with opposition on draft constitution
In an attempt to contain the widening cracks between Egypt’s political forces and save the Constituent Assembly tasked with drafting a new constitution, both the presidency and the Constituent Assembly are meeting with a variety of political figures, parties and movements into parallel meetings. The initiative To Unite with Opposition was first declared by the newly-elected head of the Muslim Brotherhood political arm, the Freedom and Justice Party, Saad El-Katatni. [Ahram Online, 11/6/2012]

Judges Club meeting to focus on Public Prosecution, judiciary
The Judges Club will hold a special general assembly session Thursday to discuss the judiciary’s status in the first draft of the new constitution, as well as the role of the Public Prosecution. Judges Club head Ahmed al-Zend had called for the meeting, and thousands of judges and members of the prosecution are expected to participate. [Egypt Independent, EGYNews (Arabic), 11/6/2012]

Constituent Assembly member: Public prosecutor threatened me
Constituent Assembly member Mohamed Abdel Moneim al-Sawy said he received threats from Public Prosecutor Abdel Meguid Mahmoud after he had filed a complaint against him on Sunday, accusing him of covering up corruption cases. “The public prosecutor phoned me and threatened that he possesses old documents that he would file against me soon if I do not withdraw the complaints I submitted against him to the Justice Minister,” Sawy told Muslim Brotherhood-affiliated satellite channel Misr 25 late Monday over the phone. [Egypt Independent, AMAY (Arabic), 11/6/2012]

EBRD to approve financing for Egypt before end of month
The European Bank for Reconstruction and Development (EBRD) will decide on a proposal to provide Egypt with financing before the end of November, the bank stated on Monday. The bank’s board of directors has issued a proposal to its board of governors to inject funds into Egypt, a final decision on which is expected to be taken before 26 November. In the event approval is secured, Egypt will become eligible to receive financing from the EBRD. [Ahram Online, 11/6/2012]

Foreign tourism up by 19.5%, ministry official says
The number of tourists visiting Egypt between January and September this year increased 19.5 percent, compared with the same period last year, said Mahmoud Abdel Wahab, acting director of the Tourism Ministry foreign tourism sector. Abdel Wahab said the current rate is “good,” and can be maintained if the security situation stabilizes. But he noted that the number of tourists from specific countries have been affected by the recent attacks on police in Arish. [Egypt Independent, 11/5/2012]

Egypt expects IMF decision within 10 days from talks
The International Monetary Fund will make its final decision on Egypt’s request for a US$4.2 million loan within 10 days after the organization’s delegation concludes talks with the government, Finance Minister Momtaz al-Saeed said on Monday. Saeed described the current negotiations between the government and the IMF delegation as “going well.” He expected that the IMF’s executive board won’t make a decision during the delegation’s visit to Cairo. [Egypt Independent, 11/5/2012]

Egyptian security inspector shot in Al-Arish
Egyptian Inspector of General Security, Lieutenant General Selim El-Gammal was shot Tuesday by unknown assailants in Al-Arish in the North Sinai. El-Gammal was seriously injured and taken to Al-Arish Hospital. A security source suggested that the assault was in response to the killing of three men by police in Sinai last week. [Ahram Online, 11/6/2012]

Play proceeds despite censors’ concerns
The play Aasheqeen Torabek, or In Love with Your Soil, has ran for the past two days without the changes proposed by the censorship committee. “The play opened without any changes and it will continue to go on without any changes,” said director Mohamed El Sharkawy. “The solidarity stand seems to have delivered the message that freedom of expression is untouchable.” The director of the play had organised a solidarity protest with several celebrities, actors and revolutionaries like Saber Fawzy, Ahmed Doma and Ultras football fans. [DNE, 11/6/2012]

Mosireen receives full support
The funding campaign to ensure that Mosireen, the media collective in Cairo that supports citizen media, could stay independent reached fever pitch in its last day. With over $15,000 still needed to reach the desired $40,000 a mere 36 hours before the deadline, an outpouring of social media messages urged people to pledge their support by donating to the fundraising effort running on a crowd-funding website. As the minutes ticked down the donations reached $40,415 which will allow Mosireen to continue their work for another year. [DNE, 11/6/2012]

Tawadros: State needs to reassure Copts
The displacement of Egypt’s Coptic population is unacceptable, hateful, and tarnishes the nation’s international reputation, the newly-elected patriarch of the Coptic Orthodox Church, Bishop Tawadros II, said Monday. In an interview with the privately-owned ONTV Live TV station, Tawadros said it is the role of the state to protect its citizens, and Copts are in need of reassurance from the government on many issues. [Egypt Independent, Reuters, 11/5/2012]

Egypt’s envoy in Greece condemns racist attacks on Egyptians
Egyptian ambassador in Greece Tarek Adel urged both Greek’s ministry of foreign affairs and general security to take needed measures to provide security to Egyptian expats following a rise of racist attacks targeting immigrants, including Egyptians. On Monday, Egyptian 29-year-old Waleed Taleb, an undocumented immigrant, was found chained to a tree on the Island of Salamina west of Athens with evidence of a brutal beating all over his body, reported Egyptian daily Al-Masry Al-Youm. [Ahram Online, 11/6/2012]

Egypt Attends Nile Basin Countries Ministerial Meeting
Minister of Water Resources and Irrigation, Mohamed Bahaa Eddin arrived in Addis Ababa on Monday to participate in a meeting for Eastern Nile Basin countries which includes Egypt, Sudan and Ethiopia. Bahaa Eldin said in a statement upon his arrival that his visit to Ethiopia aims at creating a mechanism for cooperation between the Eastern countries of the Nile Basin, reported The Middle East News Agency. [Aswat Masriya, 11/5/2012]