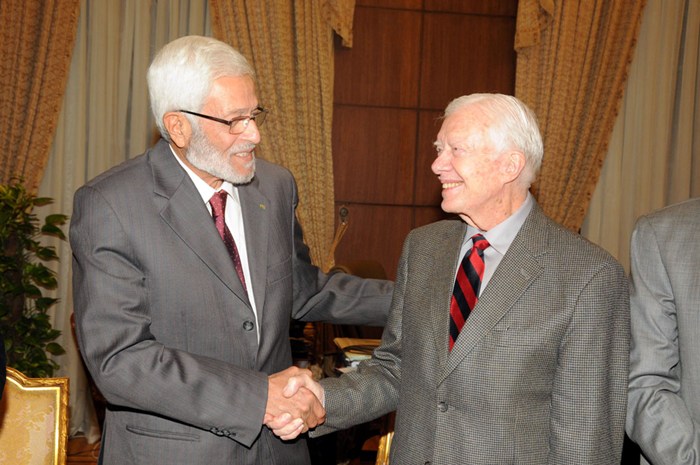 Former US president Jimmy Carter made a special visit to the Constituent Assembly’s headquarters in the Shura Council on Tuesday, where he met with the assembly head Hossam El-Gheriany.

Governorate change may be imminent
The public gaze is being cast on possible changes in the leadership of Egypt’s 27 governorates. “Most people expect that [President Mohamed] Morsy will replace the governors before the election because then they could have enough power to manipulate the process,” said Hoda Zakaria, a professor of political sociology at Zagazig University. She spoke a day after a Wednesday report in Al-Masry Al-Youm newspaper stating that the Freedom and Justice Party had sent a letter to President Morsy recommending changes in the governorates of Aswan, Sohag, Qena, Suez, Port Said, Sharqiya, and Alexandria. [DNE, 11/1/2012]

Controversial early closing hours for Egypt’s shops postponed: Minister
Egypt’s government will delay the enforcement of a ministerial decision to shut shops and restaurants early across the country, Local Development Minister Ahmed Zaki Abdeen told private Egyptian TV channel Al-Hayat, late Wednesday. The new government initiative, which was set to start Saturday, has been postponed "until further notice" as the internal regulations for implementing the decision have yet to be formulated, Abdeen affirmed. [Ahram Online, Egypt Independent, 11/1/2012]

Draft constitution meeting fails after five hours
Parties with members in the Constituent Assembly held a meeting on Tuesday in an attempt to reach a consensus on the constitution’s most controversial articles. Islamist and civil groups failed to reach agreement after five hours and postponed negotiations to next week. The meeting ignored calls by Salafi and civil forces for demonstrations against the first draft constitution. Most of these demonstrations addressed the rights of women in the draft, with less attention on the rights of children and the problem of human trafficking. The drafting committee will meet on Saturday to review the role of the judiciary, the military, and local and national security. [DNE, 10/31/2012]

Carter meets with constituent assembly head
Former US president Jimmy Carter made a special visit to the Constituent Assembly’s headquarters in the Shura Council on Tuesday, where he met with the assembly head Hossam El-Gheriany. Secretary General of the Constituent Assembly Amr Derag and head of the system of governance committee Gamal Gebril also attended the 40-minute-long meeting. Carter shared his concerns at the meeting about articles within the draft constitution that are intended to guarantee citizens rights and freedoms, enquiring about whether there is discrimination against women and Copts. [DNE, 10/31/2012]

Egypt negotiates 1.25-billion-euro loan from EBRD
The European Bank for Reconstruction and Development is granting Egypt a loan worth 1.25 billion euros next year, said an official source at the Council of Ministers. He added that the bank seeks to provide Egypt with a billion euro loan annually after three years. Prime Minister Hesham Qandil met on Tuesday with Suma Chakrabarti, head of the bank, to discuss the future cooperation between the Bank and Egypt. [Egypt Independent, 11/1/2012]

Egypt pound weakens to near 8-year low as IMF talks resume
The Egyptian pound inched to its weakest in almost eight years on Wednesday as the government resumed negotiations for a $4.8 billion loan from the International Monetary Fund. Traders said that by letting the pound slip, the government seemed to be signalling to the IMF it is prepared to be flexible over the value of the currency, which many analysts say is substantially overvalued against the dollar. [Ahram Online, 11/1/2012]

Egypt to auction land for tourist developments: Minister
Egypt will auction sites covering 28 million square metres of land for tourist developments in the next 14 months to expand the vital industry, its tourism minister said. Hisham Zaazou is tasked with reviving a sector that accounted for 10 per cent of economic activity before the revolt that ousted President Hosni Mubarak last year drove away investors and tourists. [Reuters/Ahram Online, 11/1/2012]

Egypt’s Port Said to set wheat prices at global levels
Egypt’s coastal governorate Port Said will be a pilot case for separating wheat production and distribution, whereby the price of wheat will be determined according to international prices, to be revised every three months, the state-run daily newspaper Al-Ahram reported Wednesday. Ahmed Eissa, a member of the Freedom and Justice Party’s economic committee, stated that the new system will save about LE8 billion and provide 50,000 new job opportunities. He added that four other governorates will follow suit, should the pilot programme in Port Said prove successful. [Ahram Online, Egypt Independent,11/1/2012]

Constituent Assembly opponents target Islamic identity, says Brotherhood
The Muslim Brotherhood on Wednesday criticized the opponents of the Constituent Assembly as being against Egypt’s Islamic identity. In a statement posted online, the group said opponents are trying to disrupt the constitution and attempting to impede the process of democratization. The statement also said that Sharia is the most important component of the Egyptian personality, and that it is a religion for Muslims and a culture for non-Muslims, calling for constructive criticism rather than objection. [Egypt Independent, 10/31/2012]

US-Egypt relations strong but "no friendship without bumps": Patterson
The US ambassador to Egypt Anne Paterson affirmed that the relationship between Egypt and America remains strong but that "no friendship persists without bumps along the road," in an interview with pan-Arab daily Asharq Al-Awsat, Thursday. Patterson commented that the ongoing NGO trial, in which a number of American civil society workers have been accused, came as a "shock" to Washington. [Ahram Online, 11/1/2012]

UN envoy arrives in Egypt to discuss Syria
UN and Arab League envoy to Syria Lakhdar Brahimi arrived in Cairo Thursday for a two-day visit for talks with local officials. Brahimi is expected to meet with Arab League Chief Nabil al-Araby and a number of Egyptian officials to discuss the results of his visits to Russia and China, as well as developments in Syria after the failure of the truce he called for over Eid. [Egypt Independent, 11/1/2012]