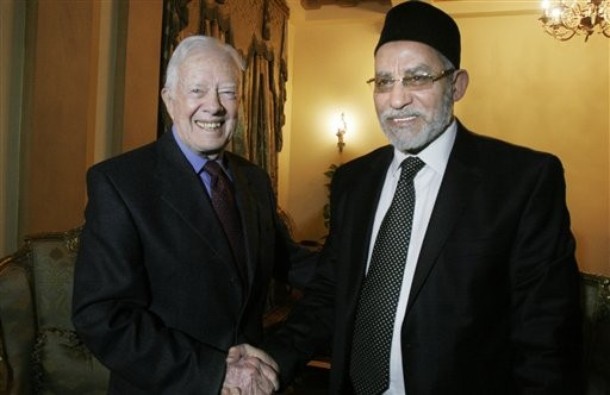 Former US President Jimmy Carter told reporters during his visit to Cairo that “all of the parties involved (in the election) have expressed eagerness to continue with the peace treaty between Israel and Egypt.”

1) A broad group of labor and political forces have agreed to coordinate ahead of celebrations planned for the anniversary of the January 25 uprising. The decision came during a meeting of representatives from the Egyptian Farmers Union, Egyptian Communist Party, Tagammu Party, the Egyptian Socialist Party, 25 the Revolutionary Youth Coalition, who agreed to form a committee in partnership with the National Association for Change. On January 8, 54 political parties and movements called for nationwide protests on 25 January to demand the following: the handover of power to an elected civilian president by April, the release of all activists currently in detention, an end to military trials for civilians, and the imposition of a minimum and maximum wage. [al-Masry al-Youm, English, 1/13/2012]

2) Preliminary results indicate that the Muslim Brotherhood’s Freedom and Justice Party won 25 seats of 50 allocated to individual candidates in the third round after runoff voting. The FJP won 35.2 percent of the party list votes in round three of the elections, followed by Al-Nour with 27.5 percent, Al-Wafd with 9.8 percent and the liberal Egyptian Bloc at 5.6 percent. The Revolution Continues coalition won only 2 percent of the seats. [The Daily News Egypt, English, 1/13/2012]

3) Court rulings have invalidated the results of elections in several governorates for the third round of polling, delaying final election results for the People’s Assembly. Some races will need to be re-run in Sohag, Assiyut, Qalubiya, Daqahlia, South Senai and Qena between January 14-18. The HEC was expected to announce partial results on Jan. 13. [al-Masry al-Youm, English, 1/13/2012]

4) Founder of the Free Egyptians Party, Naguib Sawiris, said he will not apologize to the Brotherhood for accusing the group of receiving foreign funding, but said that his party is willing to form a coalition with the Freedom and Justice Party and the Salafi Nour Party in the new parliament. [al-Shorouk, Arabic, 1/13/2012]

5) Presidential candidate Amr Moussa denied receiving funds from Saudi Arabia for his campaign, after reports surfaced accusing him of accepting somewhere between LE50 million and US$50 million from the Gulf kingdom. [al-Masry al-Youm, English, 1/13/2012]

6) The Cairo Criminal Court ordered the release of 60 people arrested during clashes outside the cabinet building in December, pending investigations into charges against them.  Judges are also questioning prominent political figures on charges of instigating clashes with the armed forces, including presidential candidate Ayman Nour, political activist Mamdouh Hamza and journalist Nawara Negm. [al-Masry al-Youm, English, 1/13/2012]

7) During a meeting with former US President Jimmy Carter, Islamist presidential candidate, Abdel Moneim Abul Fotouh, stressed that the next constitution should ensure public and personal rights for citizens and provide equality between men and women, Muslims and Christians within a framework partnership and unity. [Awsat Masriya, English, 1/12/2012]

8) State Department Spokesperson Victoria Nuland said that Deputy Secretary Burns “did not have time to meet with every political party, but our Embassy is in contact regularly with a wide range of political leaders in Egypt, including members of the Al Nour party” on his visit to Cairo. [State Department, English, 1/12/2012]

9) Former US President Jimmy Carter told reporters during his visit to Cairo that “all of the parties involved (in the election) have expressed eagerness to continue with the peace treaty between Israel and Egypt.” [al-Ahram, English, 1/13/2012]

10) The Muslim Brotherhood announced that it would consider a condition-free emergency loan from the IMF but other alternatives should be considered first, including repricing gas exports and higher taxes. "There is no objection to borrowing. But it must be without conditions. And it should be in accordance with national priorities," said Ashraf Badr El-Din, the head of the Brotherhood’s economic policy committee. [al-Ahram, English, 1/13/2012]

11) Ahead of a planned visit to Washington next week, Minister of Trade Mahmoud Essa said he aimed to develop a new economic strategy between Egypt and the US based on “common interests.” [The Daily News Egypt, English, 1/13/2012]