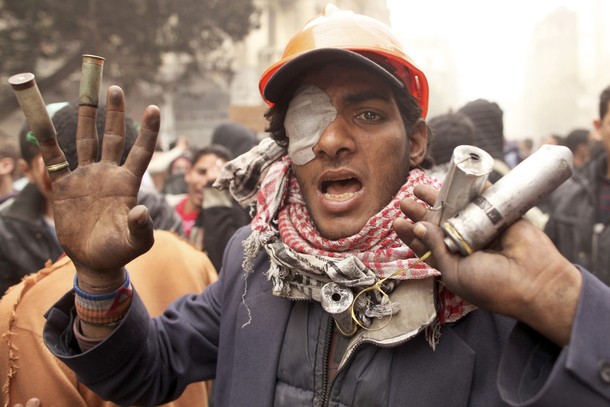 Violent clashes between protesters and security forces resumed near the Interior Ministry building late on February 5 in the fourth day of clashes since a deadly soccer riot in Port Said last week that killed at least 73 people.

1) Violent clashes between protesters and security forces resumed near the Interior Ministry building late on February 5 and ended with the latter in complete control of the surrounding area in the fourth day of clashes following the deaths of at least 73 during a soccer riot in Port Said on February 1. Eight people have been killed in downtown Cairo in the aftermath of the soccer riots. [al-Ahram, English, 2/6/2012] [al-Masry al-Youm, English, 2/6/2012] [al-Masry al-Youm, Arabic, 2/6/2012]

2) At a press conference on February 5, Interior Minister Ibrahim Youssef accused anti-government protesters of provoking security forces and plotting to storm and burn down the ministry building. [al-Ahram, English, 2/6/2012]

3) The Egypt Revolutionaries’ Alliance – an umbrella movement including 50 political groups including the six most active revolutionary coalitions – called for a campaign of civil disobedience until 7 demands are met: 1) immediate transfer of power from the SCAF to a civilian administration in the People’s Assembly 2) the immediate dissolution of Prime Minister Kamal Ganzouri’s government and the formation of a government of national salvation selected by the People’s Assembly;  the immediate holding of presidential elections; 4) the formation of an investigative committee with the judicial and executive authority to investigate all crimes committed by government since January 25, 2011; 5) the establishment of "revolutionary tribunals" to try all former regime figures accused of crimes since the January uprising; 6) the immediate dismissal of the general prosecutor; 7) the purging and overhaul of the Interior Minister and National Security apparatus. [al-Ahram, English, 2/6/2012]

4) Parliamentary Speaker Saad al-Katatny commissioned a special committee for constitutional and legislative affairs to implement the selection of a 100-member constituent assembly to draft the new constitution. Al-Katatny also commissioned a new “Committee for Defense and National Security” to prepare a draft law on “restructuring the police apparatus.” [al-Masry al-Youm, Arabic, 2/6/2012]

5) Egyptian prosecutors plan to bring criminal charges against 43 NGO employees, including at least six Americans and IRI’s Sam LaHood, accused of “accepting funds and benefits from an international organization” to pursue an activity “prohibited by law.” State Department spokesperson Victoria Nuland said on February 4 that Washington is deeply concerned over the developments and is seeking clarification from the Egyptian government.  [Bloomberg, English, 2/6/2012]

7) The SCAF-appointed civilian Advisory Council issued a statement on February 4 recommending that preparations for a presidential election begin on February 23, nearly two months earlier than the April 15 date previously announced by the military. The Council has threatened to disband on February 7 if the SCAF refuses to implement their recommendations. [The Daily News Egypt, English, 2/5/2012] [al-Masry al-Youm, English, 2/6/2012]

8) Field Marshal Tantawi met with head of the Supreme Constitutional Court Farouk Sultan and the members of the presidential elections commission on February 6 to discuss procedures for opening the nomination period. [al-Shorouk, Arabic, 2/6/2012]

9) The People’s Assembly legislative committee has asserted the authority of parliament to refer ministers to trial under a law issued in 1958, which the committee said can be implemented according to a 1977 Supreme Constitution Court ruling. The People’s Assembly decided last week to start procedures to refer Interior Minister Mohamed Ibrahim to trial for failing to protect spectators during violence at the soccer stadium in Port Said. [al-Masry al-Youm, English, 2/6/2012]

10) U.S. Secretary of State Hillary Clinton warned that the ongoing NGO investigations may lead to the loss of more than $1.3 billion in annual military aid to Cairo. Egyptian Foreign Minister Mohamed Amr responded on February 5 by saying that Egypt’s government cannot interfere in the work of the judiciary. [WSJ, English, 2/6/2012] [Bloomberg, English, 2/6/2012] [VOA, English, 2/5/2012]

11) In a New York Times op-ed on February 4, Michele Dunne and Shuja Nawaz urged the U.S. government to suspend military aid to Egypt until its government allows “a peaceful transfer of power to elected, accountable civilians” and establishes “the clear supremacy of the civilian government over the military and allow[s] an unfettered civil society to flourish.” [NYT, English, 2/4/2012]

12) An ongoing fuel and butane gas shortage is threatening the production of subsidized bread in Cairo and in several Egyptian governorates, according to Abdallah Ghorab, head of the bakeries division at the Federation of Egypt Chambers of Commerce. [al-Masry al-Youm, English, 2/6/2012]

13) Unidentified attackers set off explosives along a gas pipeline in the Sinai Peninsula on February 5, temporarily halting exports to Israel and Jordan, in the 12th such attack since the overthrow of Hosni Mubarak last year. [AFP, English, 2/5/2012]