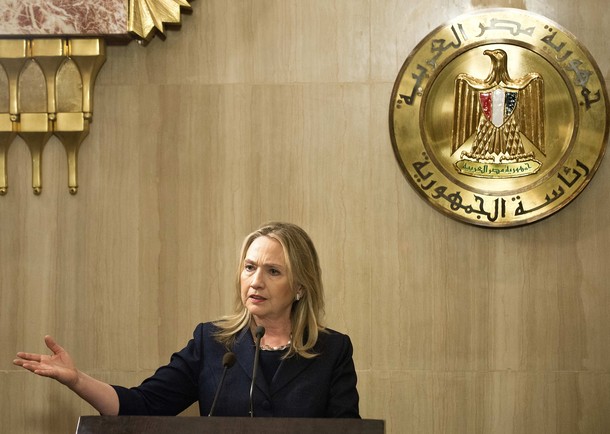 Following a close to 90-minute meeting with President Mohamed Morsi in Cairo this afternoon, US Secretary of State Hillary Clinton said that the time has come for the military to return to its national security duties and to allow Morsi to assume his full presidential authorities. Clinton spoke at a joint press conference with Egyptian counterpart Mohamed Kamel Amr at the Presidential Palace in Heliopolis, the venue of her first engagements in a two-day visit to Egypt.

[Egypt Independent, 7/14/2012] Prominent figures form Freedom and Justice Party, the political arm of the Muslim Brotherhood, have called on President Mohamed Morsy to issue a new constitutional declaration to withdraw legislative powers from the Supreme Council of the Armed Forces. The president should reinstate the 1971 Constitution and cancel all the constitutional declarations issued since the January 25 revolution started, said Ahmed Abo Baraka, a legal advisor to the FJP.

[Ahram Online, 7/15/2012] The Presidential office said on Sunday that President Mohamed Morsi on 12 July ratified a Law 79 passed on 11 June by the now-dissolved People’s Assembly to regulate the process of electing members of the Constituent Assembly – a law which had been ignored by the Supreme Council of the Armed Forces (SCAF), the country’s de facto executive power at the time. Observers argue the ratified law could prevent the Administrative Court from ruling on Tuesday on an appeal challenging the legality of the procedures by which members of parliament members selected the current Constituent Assembly.

A new deadline for forming cabinet is set

[Daily News Egypt, 7/16/2012] The quest to name the next prime minister has passed its third deadline, and perhaps set to past a fourth, after promises from both President Mohamed Morsy and his spokesperson that the country would have a prime minister and a cabinet to replace the current transitional caretaker government have rung untrue. The names of the appointees will now come after Morsy returns from his Addis Ababa trip, where he will attend the 19th African Union Summit. Mahmoud Shorkry, a political analyst and former ambassador, said the delay might have been caused by the internal state of affairs of the country “which do not give him (Morsy) the freedom to act. There are legal and political pressures as well as crisis which make him (Morsy) hesitate.” Shokry believes Morsy is focused on forging foreign ties.

[Reuters, 7/15/2012] More than 23,000 workers angered by low wages at Egypt’s biggest textile company staged a strike on Sunday, bringing production to a halt and adding to the challenges facing the new president. The factory of state-owned Misr Spinning and Weaving, in the Nile Delta city of Mahalla, was the site of protests in 2008 that sparked a wave of strikes across the country, widely regarded as a catalyst for the revolt that ended the rule of Hosni Mubarak last year. About 7,000 of the strikers at Misr Spinning and Weaving staged a sit-in at the factory to call for a rise in their basic wages, a purge of corrupt officials and improvement of conditions at the firm’s hospital.

[Ahram Online, 7/15/2012] In a surprise move, Egypt’s interior ministry has refused to allow the resumption of Egyptian Premier League activities, despite the Egyptian Football Association (EFA)’s preparations in this regard. Football activities in Egypt were suspended across-the-board in the wake of February’s Port Said disaster, which left scores dead and hundreds injured following a league game. "The ministry’s refusal to allow competitions without providing any convincing reason for doing so could lead to the collapse of Egyptian sports," the EFA spokesman warned.

[Ahram Online, 7/16/2012] The US embassy has revealed more details of the Egypt Enterprise Fund, a new $60 million initiative to invest in the shares of promising small and medium-sized Egyptian firms. The fund was announced in Cairo on Saturday by US Secretary of State Hillary Clinton at a news conference following her meeting with Egypt’s new president Mohamed Morsi. Clinton also pledged Egypt $250 million in trade credit guarantees and the fulfilment of debt swap deals announced by President Obama in late spring 2011. A Sunday statement from the US Embassy in Cairo said the Egyptian Enterprise Fund will be formally created "in the next month" with $60 million ready for investment by September.

[Ahram Online, 7/14/2012] Following a close to 90-minute meeting with President Mohamed Morsi in Cairo this afternoon, US Secretary of State Hillary Clinton said that the time has come for the military to return to its national security duties and to allow Morsi to assume his full presidential authorities. Clinton spoke at a joint press conference with Egyptian counterpart Mohamed Kamel Amr at the Presidential Palace in Heliopolis, the venue of her first engagements in a two-day visit to Egypt that will include a meeting tomorrow morning (Sunday) with Field Marshal Hussein Tantawi, head of the Supreme Council of the Armed Forces (SCAF) commended by Clinton this afternoon for having protected the Egyptian revolution, "unlike the Syrian army." In his remarks, Foreign Minister Amr said that Egypt is committed to all its international agreements and would continue to honor the Egypt-Israel Peace Treaty as long as the other side does the same.

[Reuters, 7/15/2012] Egyptian officials are preparing for negotiations to secure the release of two Americans abducted in the mountainous Sinai region and enlisting Bedouin tribal leaders as mediators, a security source said on Sunday. U.S. officials have also said they are working with Egyptian authorities to broker a release of the Americans. Several other tourists have been held briefly by tribesmen in Egypt in recent months and have been released unharmed, often after less than a few hours of negotiations with authorities. Bedouin have attacked police stations, blocked access to towns and taken hostages to show their discontent with what they see as their poor treatment by Cairo and to press for the release of jailed kinsmen.

[Egypt Independent, 7/15/2012] Catherine Ashton, the EU’s high representative for foreign affairs, will arrive in Cairo on Wednesday for a two-day visit to meet with President Mohamed Morsy, the UN Commission announced on Sunday in Brussels. Commission spokesperson Michael Mann said programs geared towards cooperation with and assistance for Egypt had been put on hold as the EU awaited the election of the Egyptian president and the formation of a new government.

[Ahram Online, 7/16/2012] President Mohamed Morsi will return home from the African Union summit in Addis Ababa, Ethiopia, Monday evening, in a new atmosphere of cooperation between Egypt and its African neighbours. It was the first time in over a decade that an Egyptian head of state has attended the summit in person. Morsi’s predecessor, Hosni Mubarak, rarely visited Africa after an assassination attempt against him in Addis Ababa in 1995. Egypt’s ambassador to Ethiopia, Mohamed Edrees, said the visit could signal the start of a new era in Egypt-Africa relations.