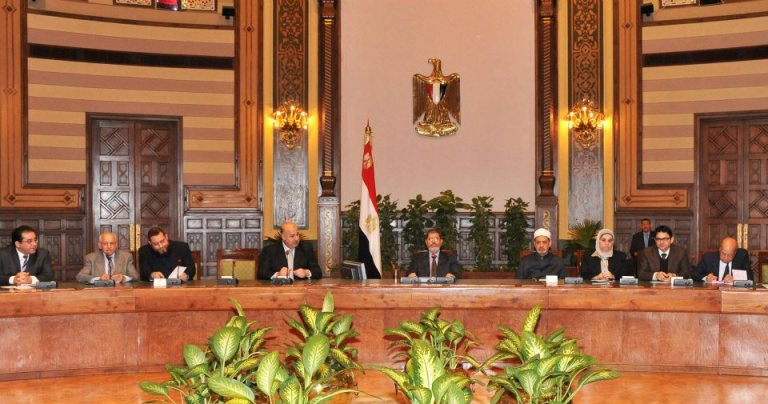 Conflicting statements emerge on Egypt opposition forces attending Morsi’s National Dialogue talks
Continuing his work in the Presidency on a voluntary and temporarily basis, former Egyptian vice president Mahmoud Mekki announced that opposition coalition National Salvation Front (NSF) will participate in the next round of National Dialogue talks on 9 January, in a news conference Tuesday. Mekki confirmed that eight NSF members will take part in the seventh National Dialogue conference, however the names of those participating have yet to be officially announced. National Salvation Front Spokesperson Hussein Abdel Ghany, however, has denied Mekki’s remarks. [Ahram Online, Egypt Independent, SIS, 1/2/2013]

Secular parties spurn new elections draft law
A number of secular parties have rejected the newly proposed draft elections law, arguing that most of the proposals submitted were neglected. The Conference Party, one of Egypt’s civil parties led by ex-presidential candidate Amr Moussa, issued a statement condemning the draft law. It argues that the proposed draft law does not grant complete judicial supervision on elections, and thus does not ensure transparency in the voting process. Mohamed Moussa, a member of the National Salvation Front (NSF), said that the draft law neglected all proposals submitted by the Front. The law ignored requests to ban the usage of religious slogans in electoral campaigns. It does not even set a financial ceiling for campaigns, he said. The Freedom and Justice Party spokesperson Ahmed Sobie said the draft law is “good in general,” but some issues needed to be discussed in the Shura Council. [DNE, Egypt Independent                , 1/2/2013]

Nour’s Salafist splinter group forms new party, joins ‘homeland’ electoral alliance
Emad Abdel-Ghafour, who resigned as head of Salafist Nour party last week, has announced the launch of new Al-Watan (Homeland) party Tuesday. Under the slogan of "A free homeland and dignified people", Abdel-Ghafour announced the launch of the party during a news conference. "We want Al-Watan party to be an effective contributor in building a realm of dignity and social justice. We want the Islamic Sharia to be a reality we can live in, not anymore a rhetoric," Abdel-Ghafour said. The new party has joined a coalition of Islamist parties dubbed "The Homeland’s Free Alliance," formed to contest upcoming parliamentary elections and will be officially announced next week. Salafi sheikh Hazem Salah Abu Ismail told Turkish news agency Anadolou, "Lists of competent candidates have been prepared to run for 100 percent of the seats in the upcoming parliamentary elections." The Salafist Calling confirmed it only backs the Nour Party distancing itself from new Al-Watan Party.[Ahram Online, Egypt Independent, DNE, 1/1/2013]

Qorsaya verdict set for 14 January
A military court on Tuesday set a verdict session for 14 January in the case against the Qorsaya island residents. The court heard the defense argument on the Tuesday. Residents of Qorsaya have been embroiled in a battle with the military over ownership rights of the island’s land. Currently, 26 residents are facing trial on charges of resisting authority and committing violence against the military. [DNE, 1/2/2013]

Former NDP whip Ezz on trial for monopolizing Egyptian steel
Egyptian steel tycoon Ahmed Ezz was referred to the economic felonies court on Tuesday on charges of engaging in monopolistic practices in the Egyptian steel market. Ezz – the secretary-general off Hosni Mubarak’s National Democratic Party (NDP) – is the former chairman of Ezz Steel, the largest steel maker in the region. The managing director of Ezz Steel, Alaa Abul-Kheir, and the group’s sales manager, Samir Noaman, were also referred to court on the same charges. Ezz Steel controls some 50 per cent of Egypt’s steel market. In 2009 the company was cleared of any violations of the monopoly law by the Egyptian Competition Authority. [Ahram Online, 1/1/2013]

Finance minister hopes to grow foreign reserves by mid-year, CBE offers $75 million to Egyptian banks on Wednesday
As the value of the pound falls and the country struggles to deal with a foreign currency shortfall, Planning and International Cooperation Minister Ashraf al-Araby said Wednesday that the government hopes to increase foreign reserves from US$15 billion to $19 billion by the end of June. The minister, who announced the goal during a community dialogue session at the Economic Research Forum, did not specify how the government would increase foreign reserves by $4 billion as part of efforts to restore the economy. The Central Bank of Egypt (CBE) announced Saturday that foreign reserves were critically low and introduced a new regime including regular currency auctions that allowed the pound to slip to an all-time low of 6.3 to the US dollar Sunday.  On Wednesday, the CBE said it offered to sell $75 million to banks. [Egypt Independent, Ahram Online, 1/2/2013]

Dollar selling price stabilizes in Egypt after reaching record-high, FJP blames central bank for rise
The US dollar stabilized against the Egyptian pound Wednesday during currency trading operations in banks and exchange bureaus, after the pound weakened to an eight-year low against the dollar earlier this week. Banking sources said that the dollar selling price stabilized today after it had reached an average of LE 6.42 on Tuesday, a record-high rate, while the average purchase rate was almost LE 6.38. President Mohamed Morsi announced on Monday that the Egyptian pound would "balance out within days" against the dollar, as the government took all necessary measures to end the dollar shortage. The Freedom and Justice Party’s economic committee head Abdallah Shehata blamed the Central Bank for the dollar’s rise against the Egyptian pound, saying the bank ran out of cash reserves after the revolution despite warnings from economic experts. [Ahram Online, Egypt Independent, 1/2/2013]

Satirical show host Youssef under investigation over alleged Morsi insult
Egypt’s prosecutor general ordered on Tuesday an investigation into a claim that popular satirical show host Bassem Youssef insulted President Mohamed Morsi, a judicial source said. On his show Al-Barnameg (The Programme), Youssef, dubbed the Egyptian Jon Stewart, had poked fun at the ruling Islamists and Morsi’s temporary adoption of extensive powers in November and December. He may be summoned for questioning after the case was transferred to a Cairo prosecutor for investigation, the source said. [Ahram Online/AFP, DNE, Reuters, 1/1/2013]

Tahrir shooting was self-defense, investigator says
A suspect detained for allegedly shooting an activist in Tahrir Square Monday was acting in self-defense, investigators said Wednesday. The suspect, Islam Ashraf Fathy, detained for four days pending investigation, was driving to his father’s hotel in downtown Cairo when he was assaulted by protesters attempting to steal his car and there was an exchange of gunfire, said the head of Qasr al-Nil police investigation services, Lieutenant Colonel Mohamed al-Sayyed. April 6 Youth Movement activist Mohannad Samir is on life support in a hospital after being shot in the head during the incident. [Egypt Independent, DNE, Ahram Online, EGYNews (Arabic) 1/2/2013]

Egypt questions suspected Israeli spy
Egyptian prosecutors were interrogating on Tuesday an Israeli man, who is suspected of espionage, in the Red Sea port of Nuweiba, a judicial source said. "An Israeli man was arrested on Monday in Taba on suspicion of espionage. He was remanded today in police custody for four days pending investigation," the source said. The suspect "infiltrated into Egypt through a mountainous area near Taba," the source added, without elaborating. Israeli media identified the suspect arrested in Taba as 24-year-old Andrey Pshenichnikov, a Russian-born immigrant to Israel who had been arrested by the Israeli Shin Bet security service last year over his pro-Palestinian activism. [Ahram Online/AFP, 1/2/2013]

Morsi aides meet with UAE officials over arrest of alleged Brotherhood cell
President Mohamed Morsi’s foreign affairs assistant Essam al-Haddad and the president’s secretary Khaled al-Qazzaz traveled Wednesday to Abu Dhabi for a two-day visit with local officials. The pair will discuss the circumstances surrounding the recent arrest of 10 Egyptians in the United Arab Emirates, as well as strengthening bilateral relations, informed sources at Cairo airport told German DPA news agency. Authorities arrested an Egyptian cell affiliated with the Muslim Brotherhood that allegedly sought to draft Egyptians for a plot against the ruling Emirati regime, according to UAE news reports Tuesday. The Brotherhood has denied the allegations. Over a hundred protesters gathered outside the embassy of the United Arab Emirates (UAE) in Giza Tuesday, demanding for the release of the detained Egyptians. [Egypt Independent, DNE, Ahram Online, 1/2/2013]

Cyprus apologizes to Egypt over envoy’s footwear row
Egyptian ambassador Menha Mahrous Bakhoum was involved in an argument with police when she was asked to undergo security checks to enter a departure terminal on 29 December, where she was seeing off members of her family. Cypriot media reported the ambassador agreed to undergo security screening but objected to removing her boots. In a heated debate that followed, media reported, a police officer was slapped and the ambassador was manhandled by police. An apology released by Cyprus on Wednesday lauded its "brotherly relations" with Egypt. Cyprus shares a common sea border with Egypt in an area thought to be rich in oil and gas. [Ahram Online/Reuters, 1/2/2013]