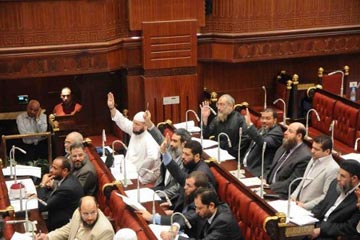 For the text of the constitutional draft in Arabic upon which the Constituent Assembly is voting, please click here.

The Constituent Assembly began voting on the new constitution on Thursday afternoon, with 85 members present. The assembly will vote on each of the 234 articles one by one, and a majority of 67 members must approve of an article in order for it to pass.

PM: Constitutional declaration issued to save Egypt
Prime Minister Hesham Qandil on Wednesday said Mohamed Morsi’s 22 November constitutional declaration was made to save Egypt and preserve state institutions, such as the Shura Council and the Constituent Assembly, in addition to the presidential elections. He told Al Jazeera Mubasher Misr that the declaration does not marginalize the judiciary, adding that, “Calling President Morsy a dictator is inappropriate. Voting on the constitution will end the crisis, and the president’s legislative powers will move to the Shura Council.” [Egypt Independent, 11/28/2012]

Civil groups’ pounce into political space seen as pro-democracy triumph
For almost two years, civil and secular groups were constantly blamed for being disunited and unorganized, paving the way for Islamists to rise to power after Hosni Mubarak’s ouster. That changed this week as opposition leaders, former presidential candidates, secular liberal and leftist parties, and even some figures previously labeled as feloul — or remnants of the former regime — united against President Mohamed Morsi’s constitutional declaration, through which he claimed sweeping powers for himself, and formed the National Salvation Front. [Egypt Independent, 11/29/2012]

Morsi to address Egyptians amid ongoing decree crisis
President Mohamed Morsi is set to give a televised speech Thursday in which he will address a number of important issues including the controversial constitutional declaration he issued last Thursday, a presidential source told Reuters. Morsi is also set to comment on protests that have erupted in opposition to the declaration. Since the declaration, tens of thousands have taken to the streets to oppose the declaration. [Ahram Online, 11/29/2012]

Youth of anti-Morsi parties reject coalition with ‘Mubarak remnants’
The student membership of the Constitution Party, Socialist Popular Alliance and the Egyptian Popular Current issued a statement Wednesday denouncing the National Front for Salvation of the Revolution coalition between their parties and figures from the Mubarak regime. "We students of parties and movements reject that our party leaders and figures stand side by side with remnants of the former regime in the ‘Front for Salvation of the Revolution,’" read the statement, adding that they are pressuring their parties to withdraw from the coalition. [Ahram Online, 11/28/2012]

After Morsy decree, diplomats lash out at Foreign Ministry
In a joint statement, 180 diplomats decried what they claimed were orders from the Foreign Ministry to defend President Mohamed Morsy’s controversial constitutional declaration.
The diplomats were allegedly sent a document justifying Morsy’s declaration and urging them to support the decree in their respective missions, saying it does not give the president new powers since he already held legislative authority. The mostly mid-career diplomats said in their statement that they were sent “an information telegram” ordering them to support the declaration. [Egypt Independent, 11/29/2012]

Constituent Assembly begins voting on new constitution
The Constituent Assembly began voting on the new constitution on Thursday afternoon, with 85 members present. The assembly will vote on each of the 234 articles one by one, and a majority of 67 members must approve of an article in order for it to pass. The assembly approved Article 2, which was the subject of much debate over past months, which states that the principles of Sharia are the source of legislation. Article 3, which stipulates that Christians and Jews may resort to their own religions on issues of personal status, has also been approved. To see discussion on other articles, see linked articles. Articles 1 through 35have been approved, many of them with a unanimous vote. Article 5, which states that the sovereignty is with the people, received the most votes against it, with object to it.  [Egypt Independent, Ahram Online, Reuters, AP, EGYNews (Arabic), 11/29/2012]

Gad Allah withdraws from constituent assembly session
President Mohamed Morsy’s legal adviser withdrew from the Constituent Assembly’s Wednesday session, describing its drafting process as “tailoring” the articles to fit specific circumstances. Mohamed Fouad Gad Allah objected mainly over articles number 182, 183, 184, 198, 199 and 200, reported state-owned news agency MENA. Gad Allah reportedly disapproved of the way they were drafted and abstained from voting on them, adding that their drafting is “unfit” since they were “tailored” to fit specific criteria. [DNE, 11/29/2012]

As vote nears, Constituent Assembly may have quorum problem
As members of the Constituent Assembly pull out in protest, the body may struggle to come up with the quorum needed to take a valid vote on the draft constitution Thursday. According to the assembly’s bylaws, the quorum requirement for discussion sessions is 51 members, a threshold which increases to 67 members in voting sessions. Since several of the members who have withdrawn have not filed written resignations, and some have only announced their withdrawals through the press, the specific number of resigned members has yet to be determined. Media reports estimate 22 of the 100 assembly members have stepped down in protest so far. The assembly has another 50 reserve members, of whom 33 remain after a series of withdrawals. [Egypt Independent, 11/29/2012]

Journalists Syndicate head returns to Constituent Assembly, church withdraws definitively
Al-Ahram state-run newspaper said on its website Thursday that Journalists Syndicate head Mamdouh al-Waly is attending the Constituent Assembly session Thursday to vote on the final constitution draft, whereas the Orthodox Church reiterated that it had definitively withdrawn. Waly’s presence and voting on the draft is expected to cause a storm of controversy, especially after the Journalists Syndicate board decided to pull him from the assembly in protest of its unbalanced formation. Bishop Paula, the Orthodox Church representative who resigned from the assembly, said the church did not authorize any member to vote on its behalf on the new constitution. [Egypt Independent, 11/29/2012]

Stock exchange continues to fall
The stock market tumbled further on Wednesday following demonstrations across the country. The stock market’s benchmark index the EGX30 took a beating in light of the ongoing political instability. Almost all indices turned red in Wednesday’s session with losses spread across almost all the trading sectors.  Only seven stocks rose, 156 fell and nine remained unchanged. [DNE, 11/28/2012]

Brotherhood to defiantly hold pro-Morsi demos in Tahrir Saturday
The Muslim Brotherhood said that it would hold demonstrations in the iconic Tahrir square on Saturday to support president Mohamed Morsi’s controversial decree. The controversial announcement ignites worries over possible confrontations in the square which is occupied by anti-Morsi protesters, who have camped out in the square since Friday. El-Nour Party official spokesperson and member of the Constituent Assembly Nader Bakkar has also announced on his official Twitter account that pro-Morsi demonstrations planned for Saturday will be held in Tahrir Square. [Ahram Online, DNE, Aswat Masriya, Shorouk (Arabic), 11/28/2012]

Hundreds continue Tahrir sit-in as new wall is constructed
Hundreds of protesters continue to hold a sit-in in Tahrir Square against President Mohamed Morsi’s controversial constitutional declaration. Protesters have been holding their sit-in for six days to demand the president cancels the declaration, which they claim is an unprecedented power grab. They also want him to dissolve the Constituent Assembly, initiate a national dialogue to come up with standards agreed upon by all political currents, in addition to other demands, including the purging of the interior ministry. [Ahram Online, DNE, EGYNews (Arabic) 11/29/2012]

Also of Interest:
Anti-Brotherhood protest in founder’s hometown | DNE
Smiling in the face of adversity | DNE

US Embassy in Cairo shuts due to ongoing clashes
The US Embassy in Cairo and its consular service has announced it is to close its doors Thursday as result of ongoing clashes in its vicinity.It further called on US citizens to avoid sites of clashes in downtown Cairo and the neighbouring Garden City area throughout the weekend as a result of expected protests. [Ahram Online, 11/29/2012]