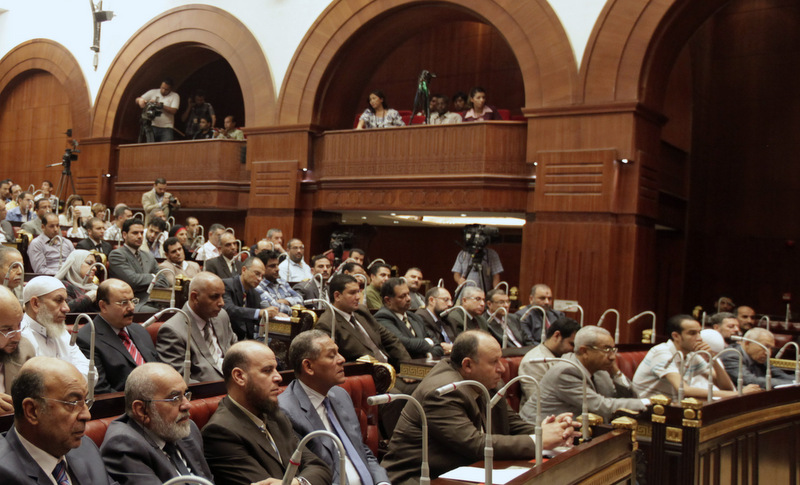 Constituent Assembly head Hossam al-Gheriany said Tuesday that the assembly would vote on the final draft of the constitution in the second week of November, after which it would be put to a public referendum.

Progressive coalition: Muslim Brotherhood trying to replace former regime
A coalition of progressive parties including Al-Dostour Party and members of the Popular Current reiterated its intention on Tuesday to continue protesting on Friday 19 October and criticised the Freedom and Justice Party (FJP) and the Muslim Brotherhood for tactics used last Friday in clashes in Tahrir Square. Representatives from a wide range of parties accused the Muslim Brotherhood of practicing the same tactics used by the dissolved National Democratic Party (NDP) under ousted President Hosni Mubarak. [Daily News Egypt, 10/16/2012]

Draft constitution seeks to safeguard Morsy’s presidency
Draft articles proposed by the Constituent Assembly, the body drafting Egypt’s constitution, seek to guarantee that President Mohamed Morsy completes his four-year presidential term, some argue based on the latest version of the document. In the chapter that deals with “Closing and Transitional Principles,” Article 227 states that, “the current president’s term will end after the passing of four years from the moment he was elected,” and that he cannot occupy this position for a longer period, except by election for a second term. [Egypt Independent, 10/16/2012]

Egypt’s non-Islamist forces take aim at draft constitutional articles
Egypt’s secular forces have criticized two different drafts of Egypt’s long-awaited constitution, both of which were unveiled within the last week. At a Tuesday meeting of the Constituent Assembly – the body tasked with drawing up a new national charter – Ayman Nour, chairman of the liberal Ghad Al-Thawra Party, said: "It was by no means a good time to unveil the drafts because political forces are still negotiating their differences over a number of key articles." Nour added that the move would "make it quite difficult for Islamist and secular forces to reach a consensus." [Ahram Online, 10/16/2012]

Egypt to receive first installment of Turkey’s pledged $2bn loan
An official of the Central Bank of Egypt (CBE) stated Monday that the first instalment of a Turkish loan is due before the end of October, as stipulated in the agreement signed during the visit of the President Morsy to Ankara last September. The agreement instructs that Egypt would receive the first half of the loan, which amounts to $1 billion, by the end of the month, while the other half will be received by the beginning of the new year, the official told Al-Watan Newspaper. The loan is to be utilised in shore up the budget deficit. [Daily News Egypt, 10/16/2012]

The Interior Ministry warned all police stations and security forces in South Sinai of the need to be on alert for jihadi attacks after the group Ansar Bayt al-Maqdes announced that it would avenge the killing of two senior members in the Gaza Strip. Security measures were intensified through the deployment of patrol units along the roads. The police called on Bedouin guards in deeper valleys to report and arrest any suspected individuals moving within the valleys and coming from North Sinai. [Egypt Independent, 10/16/2012]

Social justice protest planned for Friday in Egypt
Several political groups and parties are calling for a mass demonstration on Friday under the slogan "Egypt for all Egyptians", to demand social justice and a constitution that "represents all Egyptians." At a press conference on Tuesday, activists declared three demonstrations will march to Tahrir on Friday following afternoon prayers. The marches will start from the Mostafa Mahmoud Mosque in Mohandeseen, the district of Shubra, and the district of Sayyeda Zeinab. [Ahram Online, 10/16/2012]

Tawfiq Okasha acquitted of insulting Morsy
A Cairo court acquitted on Tuesday controversial media figure Tawfiq Okasha of charges of insulting President Mohamed Morsy. The Nasr City Misdemeanors Court found Okasha, head of Al-Faraeen TV channel, not guilty of insulting the president in his talk show Egypt Today. State-run Al-Ahram’s website reported that this case was one of 30 filed against Okasha over statements he made that were critical of Morsy. [Egypt Independent, Shorouk (Arabic), 10/16/2012]

Teacher faces discipline for cutting unveiled pupils’ hair
A primary school teacher in the Upper Egyptian governorate of Luxor has been referred for disciplinary action after she cut the hair of two female pupils last Wednesday as a punishment for not wearing hijabs, MENA reported on Tuesday, without giving further details. [Egypt Independent, 10/17/2012]

Morsi to meet with Greek president
The Greek embassy in Cairo announced plans for President Karolos Papoulias’s arrival in Egypt tomorrow. He will meet with President Morsi and a number of Egyptian officials during his two day visit after which he will also meet with Greek expats and members of the business community. [Ahram (Arabic), 10/17/2012]